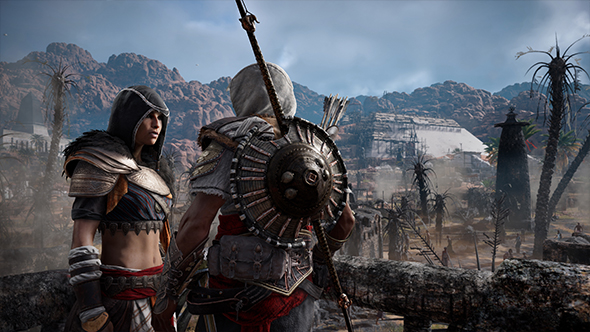 The first DLC adventure for Assassin’s Creed Origins is out tomorrow, and Ubisoft have provided a trailer showing off what to expect. The Hidden Ones takes place four years after the events of the main story, so beware of spoilers – though they’re mostly light thematic ones.

Still deciding whether to jump into the main game? Here’s our Assassin’s Creed Origins PC review.

This DLC focuses on the expansion of the Brotherhood as they are set against a Roman force at the Sinai. Naturally, Bayek and Aya factor heavily into the events, and the nefarious voice that keeps sounding off in the trailer sounds like he’s putting forth some very Templar-like ideas, which I could scarcely dream to expect from an Assassin’s Creed story.

The Hidden Ones expands the level cap to 45, and grants access to four new Legendary weapons, a new outfit, two new mounts, and two new levels for crafted gear. It’s available as part of the season pass for $39.99 / £34.99 / €39.99, or will be available as a separate purchase once it releases tomorrow.

Assassin’s Creed Origins’ next DLC is due in March, with the free Discovery Tour mode coming in February.