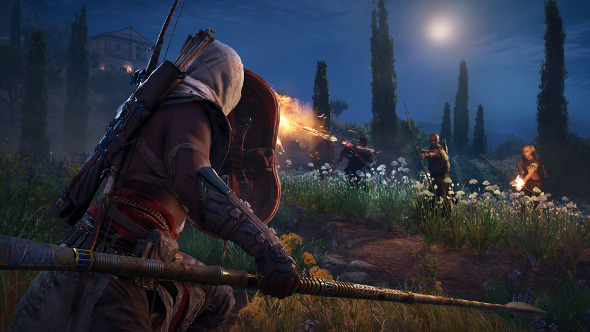 Assassin’s Creed has always had flashy combat but it’s also always been a bit shallow. In the early games, getting into a fight felt like a failure. Since then, the series has increasingly put more of an emphasis on its scraps, but without a great combat system to back them up. In a developer Q&A, Ashraf Ismail, game direction on Assassin’s Creed Origins, details how the team have tried to up their game. It all sounds quite promising.

Check out everything we know about Assassin’s Creed Origins.

Along with the twin stamina and adrenaline systems, Origins adds hitbox-based combat instead of animation-based combat. In previous games, when you swing your weapon, the protagonist and their enemy align and go through an attack animation. But whenever you hit attack in Origins you just swing your weapon. So speed and distance now matter, as does where you’re standing and where your enemies are. This means that, if you’ve got a weapon with a lot of range and a wide arc, you can hit multiple enemies with one strike.

Speaking of enemies, how they fight has been changed as well. For instance, enemies no longer take turns to attack. They’ll gang up on the player, making blocking, dodging, and parrying actually important. Unlike other Assassin’s Creed games, you won’t be able to just wander up to a large group of enemies and walk out alive unless you learn how to manage them.

Ismail also goes into combos, weapon types, and the RPG-inspired gear system where weapons have different stats, levels, and effects, like poison and fire. It sounds a lot more action-orientated, but hopefully stealth hasn’t been entirely forgotten. Indeed, being sneaky might be one of the best ways to deal with big groups of foes now that we can’t just charge in.

Assassin’s Creed Origins is due out on October 27.