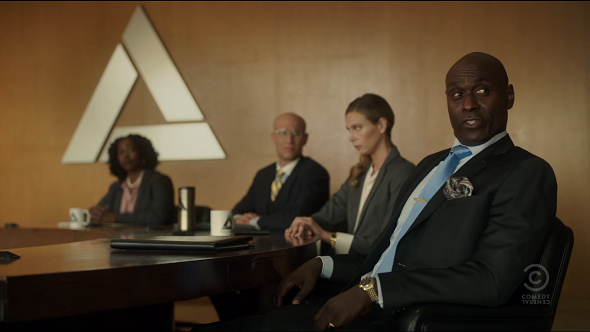 The present-day plots and antics of the Assassin’s Creed series are divisive to say the least. However, Abstergo, the evil corporate conglomerate that act as a face for the Templar Order in the 21st Century, are key to the story. Their logo is even pretty prominent throughout the series: that’s why it’s weird that Comedy Central’s new show, Corporate, has a company with Abstergo’s logo.

In case this gets you in the mood to play Assassin’s Creed Origins, here’s a guide to the game’s abilities.

It’s not exactly a logo known outside of gaming circles, granted, but it’s a flipped version of the Abstergo logo, noticed by -Fluffers- on Reddit. It’s not the first time this sort of thing has happened. Funnily enough, a post on the Ubisoft forums had people wondering if Egypt would be the next setting back in 2013 when Egyptian TV had the Abstergo logo over a press conference from then-president Mohammed Morsi.

It’s likely to be a coincidence, or a case of someone being unintentionally influenced by Assassin’s Creed’s iconography but,if it helps you justify murdering Templars in the games, feel free to think of Abstergo as a mildly incompetent evil conglomerate at the heart of an American sitcom.

You can see the logo on a wall a minute into the trailer above. The only other fun tidbit is that Lance Reddick is in it, as you can see, who is famous for his work on John Wick, in Fringe, and as Commander Zavala in Destiny. Let the conspiracy theories begin.