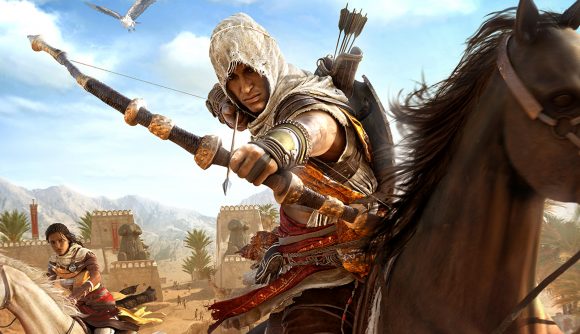 Xbox today reveals the remaining Game Pass April games list, which includes one of the best survival games on PC and a quirky and previously PlayStation-exclusive puzzle game. More surprisingly, Microsoft also confirms that one of the best Assassin’s Creed games is coming “in the next two months”.

The first half of April brought with it some excellent additions to Game Pass on PC, including Life is Strange: True Colours and Panzer Corps 2. Now the games for the second half of April are revealed, and there are a few neat titles on there – including the previously-announced Bugsnax and zombie game 7 Days to Die.

However, the biggest surprise is the announcement of more Ubisoft games coming to Game Pass. Sometime in the next two months, the service will add both Assassin’s Creed Origins and For Honor: Marching Fire Edition. You’ll need to play both through the Ubisoft Connect app, in much the same way subscribers have to use a separate client to play EA games – but still, a good deal.

Here are all the games coming to Game Pass in the next two weeks:

And here are the games leaving the service on April 30: