It isn’t sensationalist to say Assassin’s Creed Syndicate has a lot of wrongs to right after Unity’s… troubled launch on PC. No one’s saying a vast and detailed open world populated by the cast of Mars Attacks isn’t funny – not for a second. But Unity’s myriad and often hilarious bugs did make it quite hard to actually, y’know, play. Syndicate’s day one PC performance needs to be a great deal more polished and optimised in order to salvage the franchise’s reputation on our fair platform.

And – spoiler warning – it thankfully is. But it does have its quirks.

For more liberated wanderings, check out the best sandbox games on PC.

Getting started with Syndicate? Here’s a tips vid courtesy of NVIDIA.

First things first: the machine I’m testing Syndicate out on isn’t a monstrous system, falling closer to Syndicate’s minimum requirements than the recommended spec – plus, my display’s 1600p native resolution makes high fps figures that bit harder to come by. However, both minimum and recommended specs are lower than Unity’s, so my machine should be able to produce a decent performance/fidelity compromise, even beyond 1080p.

However, I’m not showered by visual adjustment options to do so. Syndicate has two feature-light display menus, the first offering simply brightness (almost always set too high in AssCreed PC ports for some reason), active monitor (a relatively niche option for those with multi-panel displays), resolution, refresh rate, and v-sync. 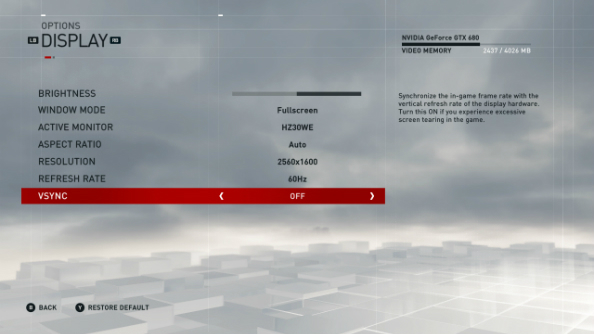 If you’re looking for performance gains, this ain’t your menu. Turning off v-sync might allow a higher max frame rate depending on your system’s performance and monitor refresh rate, but it’ll also likely introduce more variance in fps and, of course, screen tearing. Lowering resolution below your panel’s native output is a desperate measure, and to be avoided unless you absolutely can’t summon a playable frame rate from other graphics option adjustments. And that brings us rather neatly onto Syndicate’s second display options menu: 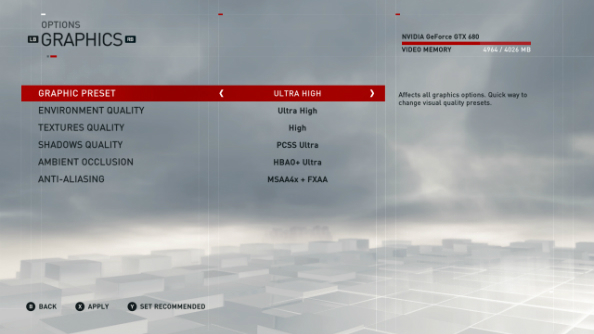 This is where the meat of the visual tweaking lies, though as you can see it’s hardly a robust collection of sliders. The game offers five graphics presets: ultra high, very high, high, medium, and low. By default it detected my system would be best off with the high preset, and that buys me frame rates of 28-35, depending on the NPC population and indoor/outdoor environments. Not bad.

AssCreed titles have never really gone weapons-free on PC with their graphics options, but this array does feel a bit limited. In particular, there are a couple of options I really feel the absence of: a frame cap, and a draw distance slider. I’m not at all surprised they’re not present, but given the high demands of the game it’d be really useful to lock the frame rate to 30 and thus smooth out busy combat sequences and tricky parkour runs above densely populated streets. To that same end, narrowing the draw distance a bit would help older systems cope with the sprawl of Victorian London.

But that’s your lot. No adventurous downsampling option as Call Of Duty: Black Ops 3 sprang upon us recently, just the bog standard sliders. There is at least one interesting and unusual feature tucked away in this menu – a video memory load indicator that predicts how much of your card’s VRAM will be used by running each preset. As you can see above, running the ultra high preset requires almost 5GB GDDR5, and I only have 4GB. As such, my frame rate languishes below 15fps territory. From very high downwards however, I’m no longer in VRAM negative equity. It’s a handy indicator, but its usefulness is greatly dampened by the fact you’ll need to restart the entire game – not just reload the level – to make the majority of changes available in this menu. I don’t need to stress how much of a pain that is. Oddly enough, shifting between high and medium presets doesn’t require a restart, but applying any other preset does. Beginning with the game maxed out at ultra-high settings, let’s take a look at the visuals. 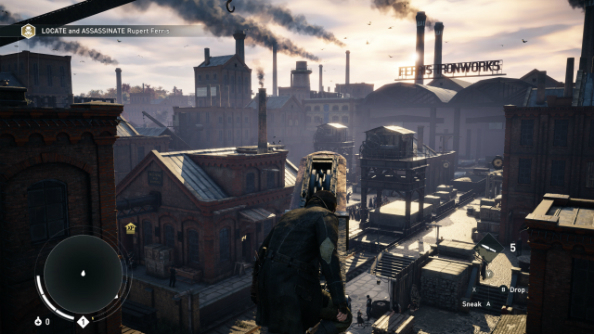 Of particular note are the textures. No other graphics option change is more pronounced in this game than texture quality, so if you’re tweaking here and there to buy yourself a higher frame rate, I’d advise keeping texture quality as high as possible and instead lowering AA, shadow quality or HBAO. While my own system (again, just above minimum specs) can’t summon a playable frame rate using ultra high, there’s still an encouraging consistency in fps indicating a much better-optimised incarnation of the AnvilNext engine than appeared in Unity. Onwards to very high settings: 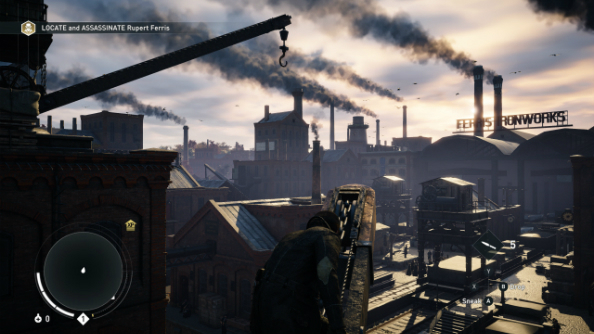 Frankly, there isn’t a huge difference in visual fidelity here compared to ultra high, but certain graphics options have really taken the load off the GPU’s VRAM. Turning shadow quality down from PCSS ultra to PCSS requires a lot less video memory, and I defy anyone to tell the difference between the two with their naked eye. Anti-alisasing measures have been relaxed just slightly too, to MSAAX2 + FXAA (as opposed to MSAAX2 + FXAA in ultra high). What’s happening here is that fewer samples are being used to generate multi-sample AA, while a seperate, less system-intensive fast approximate AA technique is applied over the top. It’s pretty rigorous, and frees up still more VRAM. Let’s move swiftly on to the high preset: 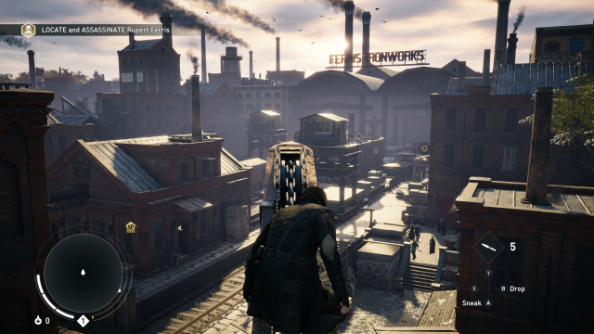 It’s only at this point that the subtleties of AnvilNext’s lighting engine begin to fade and Syndicate takes on an appearance closer to Black Flag. The game now requires just over 3GB of video memory to render at 1600p, and the big resource-savers are a step down to a single, real-time AA tehnique in the form of FXAA, standard HBAO and shadows, and simply ‘high’ environment and texture detail. You can see the effect of the texture detail drop most noticeably, so again I’d advise keeping it higher and turning down shadows and AA an extra notch. Things are about to get significantly muddier and with rougher edges as we plunge deeper into medium settings: 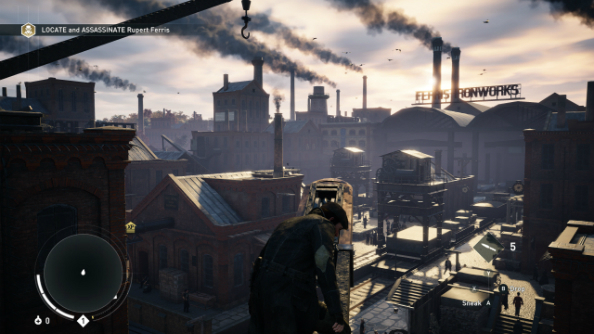 Okay, things are getting pretty washed out now. The texture quality of the girder I’m perching on is dramatically lower than it was using the high preset, and jagged edges are beginning to emerge o the railroad sleepers and the metalwork on the building to the left. However, this is also the point at which frame rates improve dramatically, some 15-20fps faster on my system. At this point the game requires just 2.6GB of VRAM, and has dialled down texture, environment and shadow quality to ‘medium’ while employing the same standard HBAO and AA techniques.While it’s still an attractive game, the washed-out textures of Frye’s coat and simple, plastic-like surfaces on buildings do break the immersion a bit. There’s only one more preset to examine, and it isn’t going to get prettier. Hit us with it, low settings: 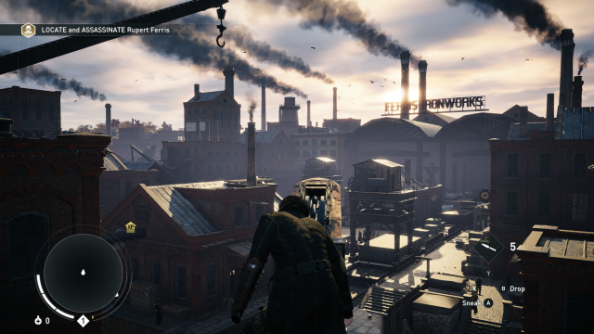 The game essentially becomes Assassin’s Creed Syndicate: Cataracts Edition at this point. Ambient occlusion has been turned off completely, while textures, environmental detail and shadows are running at their lowest possible mark. I’m getting 40-45fps at this setting on a 1600p panel, which is far from ideal and suggests there’s room in the code for further optimisation, but anyone with the industry standard GTX 970/1080p display combo should be able to run Syndicate at 60FPS using the high preset, or possibly beyond.

The combination of a bare minimum of visual options and less than stellar performances at low settings and a 4GB graphics card suggest Ubisoft Quebec may indeed have left a few stones unturned in their quest for PC optimisation, but all things considered Syndicate isn’t a bad port. Above all, its a huge improvement on Unity in terms of stability and consistency – frame rates might not be great on my test system, but as I mentioned there’s also not much variance as scenes get crowded or warehouse doors open up to reveal great chunks of city.

NVIDIA have released a game-ready driver for Syndicate, but it had little effect on my GTX 680’s performances. If you noticed a performance improvement after updating your drivers, let me know in the comments below.

How’s your experience of Assassin’s Creed Syndicate going? What kind of performance levels are you getting, and from what specs? Let us know below.