How are you not prepared for someone to ask why none of the other assassins who appear in the gameplay trailer are women? How are you not prepared to forestall that question by, you know, actually including playable female characters in the game? And if by some monumental act of stupidity you haven’t created Assassin women, how do you not have a better explanation than the disastrous admission that creative director Alex Amancio just made:

“It’s double the animations, it’s double the voices, all that stuff and double the visual assets,” Amancio said. “Especially because we have customizable assassins. It was really a lot of extra production work.”

Polygon have the full story, and I have little doubt that Ubisoft will find some way of walking back Amancio’s comments. What’s on the record is too damning, too monumentally tone-deaf and indifferent to remain. But the fact remains, it was Amancio’s first response to one of the most predictable questions he could have been asked. Where are the women?

And it’s not just what the Assassin’s Creed: Unity developers told Polygon in one interview. Nope, technical director James Therien told Videogamer: “It was on our feature list until not too long ago, but it’s a question of focus and production,” Therien explained. “So we wanted to make sure we had the best experience for the character. A female character means that you have to redo a lot of animation, a lot of costumes [inaudible]. It would have doubled the work on those things. And I mean it’s something the team really wanted, but we had to make a decision… It’s unfortunate, but it’s a reality of game development.”

That’d be difficult to credit coming from most developers. From Ubisoft, it’s astonishing.

In my father’s house…

A quick story: a couple years ago, I visited Ubisoft Montreal. It’s an incredible place in an amazing neighborhood. Large parts of it feel like some kind of well-financed artists’ colony. But then I saw something that struck me as a little creepy, a bit at odds with the creative Neverland that Ubisoft’s flagship endeavored to create.

It was a room full of artists. Well-lit, natural light pouring in through the tall windows. Not a shabby place at all. But there were just so many of them. Dozens of them, all sitting at identical desks in perfect, library-like silence. Just churning out the assets that populate Ubisoft’s games. It reminded me of that shot in The Apartment, of the endless rows of office workers that Jack Lemmon’s character so desperately wants to escape. 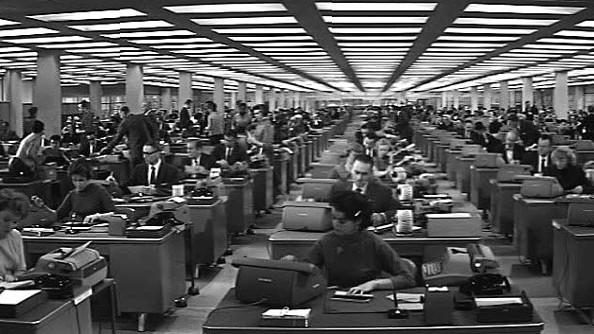 As exciting a place as Ubisoft Montreal is, it was a sobering sight. Rooms like that are a reminder of what it takes to produce the kind of mass entertainment that Ubisoft have become the masters of. It is a place where thousands of individuals let their talent be harnessed and pointed in the same direction. It may not allow a ton of individual creative control for the vast majority of workers, but it’s also what allows them to build entire worlds for us to play in.

A lot of rooms like that exist within Ubisoft’s massive empire of distributed development. It’s why we get a new open world game every year. Hell, it’s why we get two of them every year. It’s why we have massive crowds and sprawling city streets with shocking period details and a hundred different minigames to go play.

It’s also why Ubisoft don’t get to wave their hands and explain that they didn’t have the resources to give people the option to play as women in the new Assassin’s Creed game. Every Ubisoft game is the videogame equivalent of a cornucopia, a testament to Ubisofts resources and their bountiful harvest of franchise revenue.

Whatever you wish, dear gamer. Do you like pirates? Have a ship, and storm-tossed seas, and lusty singing from the hands. Do you like Paris in the time of the revolution? We’ve created a 1:1 replica of the city during the Reign of Terror. Eat, and drink your fill! Tell us your heart’s desires!

“Where are the women?”

And suddenly it’s a time of famine.

To prepare a place for you

The thing is, I can understand. Unity’s multiplayer is probably going to be like Watch Dogs, where everyone is playing as the hero and will only see that character. It’s easy to imagine how Ubisoft reached this decision. Everyone is going to be seeing the same guy when they play, so why not just make the multiplayer buddies into color-swapped clones? Adding women would be a lot of hard work for something that’d be peripheral to most players’ experience.

The Polygon interview nearly confirms this. Amancio again: “Because of that, the common denominator was Arno. It’s not like we could cut our main character, so the only logical option, the only option we had, was to cut the female avatar [emphasis added].”

It it really logical, or the only option? It’s the difference between a world where women exist as sexy distractions for guards and nameless extras in the background, and a world where women actually matter. Where they have agency. Where players get a choice about how they want to be represented to the world when they play multiplayer.

I always thought it was a shame that Ubisoft consigned their first Assassin woman to a Vita-only game. Assassin’s Creed: Liberation proved that there are people at work on the Assassin’s Creed franchise who want to tell other stories from other perspectives.

Today’s news out of E3 makes me wonder what happened to those people. And it makes me wonder whether or not, in any of those vast rooms of artists and designers and animators, there are any women who have a voice.