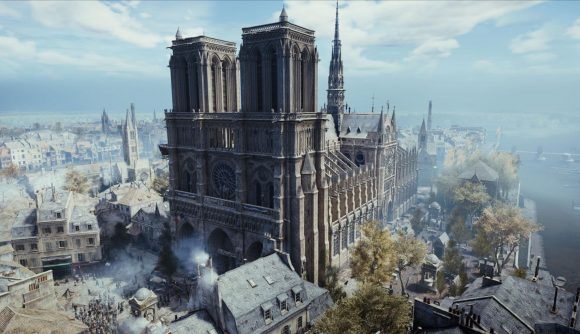 April 26, 2019 More than 3 million people downloaded Assassin’s Creed Unity during the giveaway in the wake of the Notre Dame fire.

Three million people downloaded Assassin’s Creed Unity in the wake of the Notre-Dame fire. According to The Hollywood Reporter, that milestone was reached in just a single week, after Ubisoft made the 2014 title temporarily available for free.

Last week, Ubisoft announced that it would be donating €500,000 ($564,000, £433,000) “to help with the restoration and reconstruction” of the Notre-Dame Cathedral, which was severely damaged in a fire that saw the building’s spire, and roof destroyed, as well as much of its original woodwork.

As well as the donation, the company also announced that “”we want to give everyone the chance to experience the majesty and beauty of Notre-Dame the best way we know how.” To that end, the company gave away Assassin’s Creed Unity – which is set in Paris and features a highly-detailed digital version of the Cathedral – for free. The promotion was available until 09:00 yesterday.

A report by The Verge from 2014 says that Caroline Miousse, a senior level designer on Assassin’s Creed Unity (set in Paris during the French Revolution) spent two years building the game’s version of the iconic cathedral. Miousse reportedly worked with texture artists to ensure that no brick was out of place, and with historians to help place relevant artwork.

In a Q&A from Ubisoft, Miousse said that the game’s version of the building was built to an almost “1:1 ratio,” and guesses that around 5,000 hours over 14 months were spent on Notre-Dame alone.

Unity’s version of Notre-Dame is not entirely historically accurate, as the cathedral’s spires were added to its real-life counterpart after the events of the game. Despite the differences, however, Ubisoft’s digital mapping could come in useful when attempting to rebuild the Cathedral.

Nevertheless, the ability to explore a detailed version of both the inside and outside of the cathedral could prove extremely useful when it comes to rebuilding parts of it that were damaged or destroyed in the fire.

Related: The next Assassin’s Creed game is about Vikings

Ubisoft’s generosity saw a swathe of positive reviews of Assassin’s Creed Unity appear on Steam, and reports suggested that the uptick in popularity meant that new servers had to be utilised to meet up with demand. Like a fool, I forgot to take advantage of the freebie, but with all of Ancient Greece and Egypt still to explore, maybe that’s for the best.