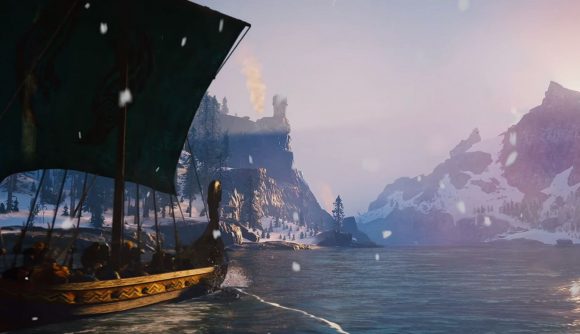 Your playable Viking, Eivor, will get to visit Vinland – most likely, modern Newfoundland – as part of at least one quest in forthcoming Nordic saga Assassin’s Creed Valhalla.

The exciting destination was confirmed to Jordan during a recent hands-on session with the game (which he mostly spent playing dice), and we took the chance to probe a little deeper when we spoke with game director Eric Baptizat.

“Vikings as you know have been to America – or Vinland, as it was called in this time period – so there have been different troubles there,” Baptizat says. “You’re going to be able to travel there – you have a specific quest – and you’re going to be able to visit a portion of America. We want to keep it a surprise for the player, but it’s part of the external world that you’re going to visit.” He wouldn’t say more, but just to have it confirmed that we’ll be travelling beyond England and Norway and honouring the Vikings’ legacy as some of the world’s greatest maritime explorers is exciting.

Obviously, you already knew that the Vikings discovered the North American continent almost five centuries before Columbus. More specifically, Icelandic Norseman Leif Eríksson explored several territories on the Canadian Atlantic coast around 1000 AD, naming his discovery Vinland. Assassin’s Creed Valhalla is set much earlier than this, however – it all kicks off during the 830s – so it seems the game may exercise a little dramatic licence with history or jump around in time. Or perhaps we’re simply invited to suppose that Eivor made the discovery first and forgot to write it down.

Explore more: Check out the best open-world games on PC

Exactly what Vinland encompasses, geographically, is fluid. It’s sometimes used to refer to all areas in North America beyond Greenland that were explored by the Norse, but in the Icelandic sagas, it’s sometimes distinguished from Eríksson’s other discoveries of Helluland (probably Baffin Island) and Markland (probably Labrador). What’s known is that there is archaeological evidence for Norse settlements at L’Anse aux Meadows, on the northern tip of the island of Newfoundland.