It’s 873 AD and I’m staggering around the centre of Norwich, drunk out of my wits. After climbing the church to see more of the city, stopping briefly to pick up a cat and give it a fuss, I stumble into a native who recognises me and accuses me of being a ‘clod’. Much to my surprise, I’m not given the option to draw my axe, instead I’m goaded into flyting with the Anglo-Saxon, exchanging poetic jabs for some spare silver. City-centre binge drinking sessions don’t typically end this smoothly in 2020.

The revelry continues a short ride away in the village of Elmenham, where we attend the wedding of client king Oswald to Valdis, a Dane from protagonist Eivor’s clan. After the ceremony I’m free to take part in the festivities, which range from inebriated target practice and a race to finish three horns of ale, to carrying an unconscious Finnr down from the church roof. Somewhere along the way I have sex with a Viking called Broder, only to spoil the mood afterwards by mistakenly calling him Brothir, which is his brother’s name.

I spent about a third of my time with Assassin’s Creed Valhalla jovially mingling with Danes and Anglo-Saxons. There’s an unexpectedly joyful mood underpinning this section of the game, and while male Eivor doesn’t feel quite as playful and exuberant as Odyssey’s Alexios or Kassandra, he’s written with enough charm to cut through his moody disposition. Open-world East Anglia is warm and friendly, which definitely helps convince you that you’re playing a settler rather than an invader. England begins to feel a lot more homely when a group of kids in a remote hamlet invite you to play a game of hide and seek, or help track down someone’s cat.

This downtime provides some welcome respite as the rest of the demo is spent sloshing through thick mud, swinging hatchets, and lopping limbs.

Valhalla’s combat occupies an ideal midpoint between the methodical, shield-heavy brawls of Origins and Odyssey’s hyper aggressive ability-driven bouts. You can hide behind a heavy shield and look for small windows of opportunity to strike with your hatchet, or forego any defense whatsoever by overwhelming enemies with attacks and using abilities to chain aggressive flurries together. 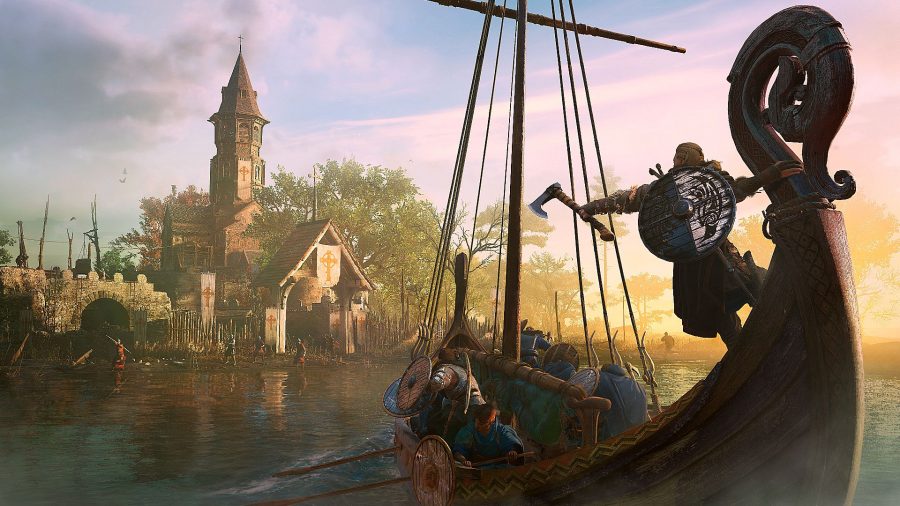 At first I choose the conservative approach, sitting behind a shield and waiting for the enemy to overextend, before punishing them with a combo. However, the real fun starts after I swap the shield for a flail. Without the shield’s protection I have to skip around the arena, ducking between lunging soldiers and waiting for a chance to start spinning my flail. Eventually, I’m able to set up that chance by timing a heavy attack with the hatchet that stuns the enemy in front of me – there’s an agonising pause while I build up momentum with the flail, punctuated by a satisfying crunch as repeated blows bludgeon the grunt into the ground. With a flurry of successful attacks under my belt, I’ve built enough adrenaline to unleash an ability. I choose Throwing Axe Fury, and hurl a series of hatchets into the first soldier before finishing off the last with my final two axes.

For my next encounter I try the two-handed battle axe, which is too slow for my liking. Then I try the spear, which has a powerful overhead attack that immediately destroys light shields and leaves the enemy stunned on the floor, ready for you to finish with a squelching head stomp. I like this a lot. Finally, I settle on carrying a hatchet in each hand, more for the fact that it feels really Viking than for its effectiveness in battle.

Valhalla's combat occupies an ideal midpoint between Origins and Odyssey

Lots of work has been put into making combat feel suitably grim, with every strike casting ribbons of claret through the air. It’s not uncommon to see an arm or a head tumble down into the mud, and whether you’re firing a charged arrow shot or unleashing a Spartan-inspired kick, you can be sure your target will travel a few metres.

Since the series transitioned to a hitbox-based melee system with Origins, Ubisoft has made great strides with the depth and complexity of swordplay in Assassin’s Creed games, and with Valhalla it’s clear the publisher is ready to nail the feel of melee combat, too. This is plain to see during Valhalla’s Viking raids. 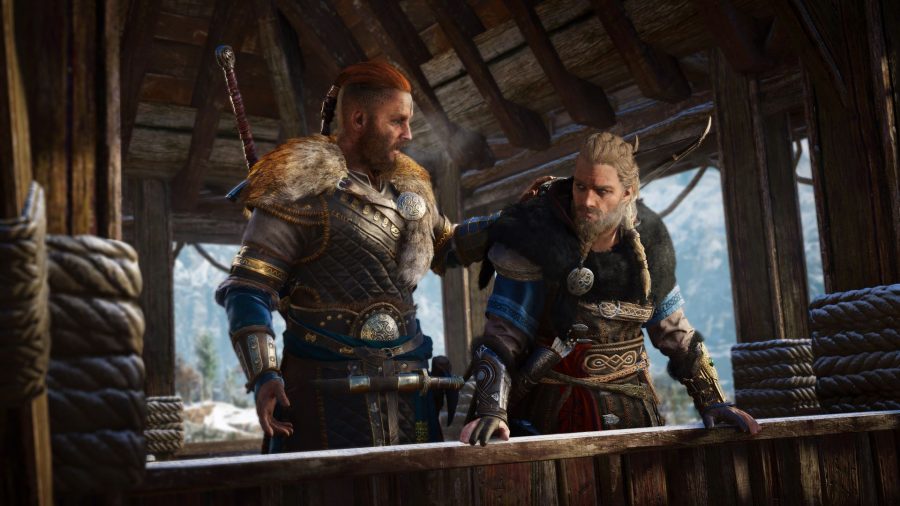 Early into the demo I embark on a raid to defeat a rival Danish clan and liberate Oswald ahead of the wedding. Raids are an evolution of Odyssey’s Conquest Battles, large-scale brawls between two armies, but with siege-like stages that give the battle some much needed direction and urgency. Raids are pure cinema, as you scythe your way through what feels like an entire army, ballistas and archers raining fire down from above while a battering ram drums away in the background.

After freeing Oswald and attending his wedding I’m free to explore a sizable chunk of the East Anglia region, from ancient woodlands in deep Norfolk, to the coast around Great Yarmouth. Whether galloping down damp, muddy lanes on horseback or coursing through the rivers in your longship – the crew belting out skaldic songs as they go – East Anglia is a pleasure to explore.

this is Ubisoft's most naturalistic authentic creation to date

Dense woodlands, thickets, and no shortage of fog lend the landscape an air of mystery. Thick oak trees are draped in moss and lichen, the forest floor is illuminated by wildflowers like the bright white wood anemone and the mauve hue of columbine. In a call back to Assassin’s Creed III, you can navigate portions of the forest through a network of gnarled branches. As the forest opens up into heathland, fern thickets create helpful pockets for stalking wildlife, while protruding alder and elm trees offer vantage points. 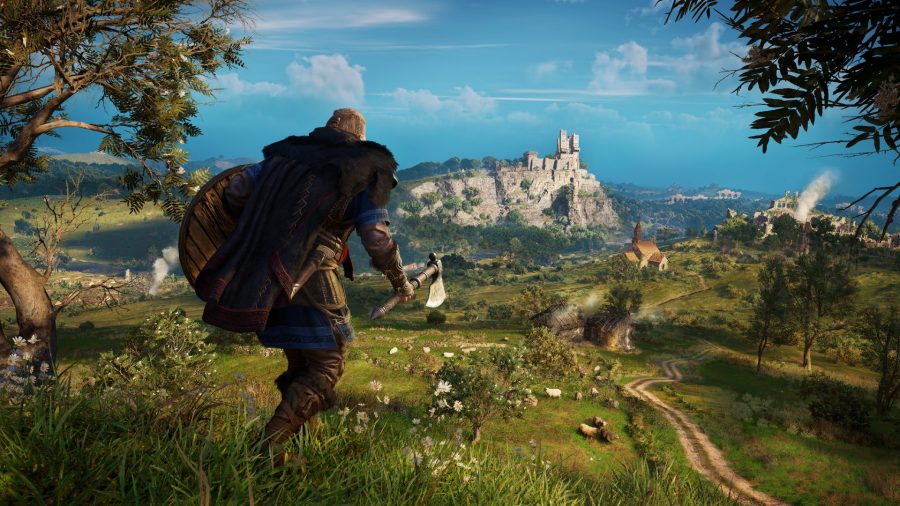 A lot of the moment-to-moment verticality of previous Assassin’s Creed games is lost as you explore the open world, but the landscape is perhaps Ubisoft’s most naturalistic and authentic creation to date.

This sense of place is strengthened by nods to East Anglia’s myths and legends, including a battle with the Black Shuck, a ghostly dog of East Anglian folklore. I spent the remainder of the hands-on session clearing map icons and was pleasantly surprised by the wealth of mysteries and curios waiting to be discovered. In an hour of roaming around I helped out with pagan rituals, slayed a demon goddess, and stumbled upon a murderous Anglo-Saxon nun. There’s plenty of weirdness and wickedness in this world if you seek it out.

The immersion is finally broken when exploring an anomaly, which is a parkour puzzle that ties Valhalla back to the ongoing Abstergo meta story. With this abrupt interruption over with, the demo ends and I’m cruelly thrust back into modern-day, pandemic-induced lockdown Britain. Ubisoft seem to have pulled off the impossible: making Dark Ages England as mystifying and enchanting as Ancient Egypt and Greece. And just like with Assassin’s Creed Origins and Odyssey, I can’t wait to see more.