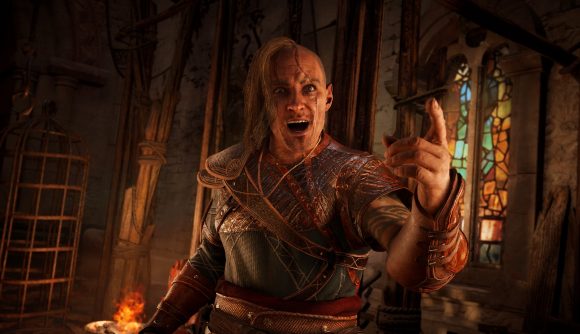 Ubisoft’s virtual depiction of 873 AD in Assassin’s Creed Valhalla has certainly been a peculiar place if the Viking game’s recent patch notes are anything to go by. The developer posted a changelog of everything that happened in Title Update 1.0.4, and it’s some read.

There was a bug that was causing the game’s dogs to levitate if you gave them a good pet. It’s the pick of the bunch for sure, and I’m kind of sad it’s gone. Let those good boys levitate. Elsewhere, you’ll find that crowds will now cheer during drinking games, so you can recreate the feeling of pounding a pint in the pub at uni. There are some things to be wary of, too. Ubisoft says that NPCs will now react to your robbing them. So, eh, no more free loot, I guess.

Silliness aside, there are more practical fixes, too. Ubisoft says it’s addressed a VRAM and RAM leakage issue that was occurring when players alt-tabbed to desktop. Stability and performance have also been improved across the board, and cloud saves have been rejigged to make them more distinguishable from regular saves.

If you’d like to catch the patch notes in full, you can find them on the developer’s website. They’re well worth the read.

If you haven’t picked the game up yet, we’d recommend it. In his Assassin’s Creed Valhalla review, Rich explains that “it doesn’t do anything fundamentally new and too much of the series’ jank remains, but when Valhalla works, it’s a marvel, and it works far more often than not.” Mind you, I haven’t asked him if he came across any floating doggos.