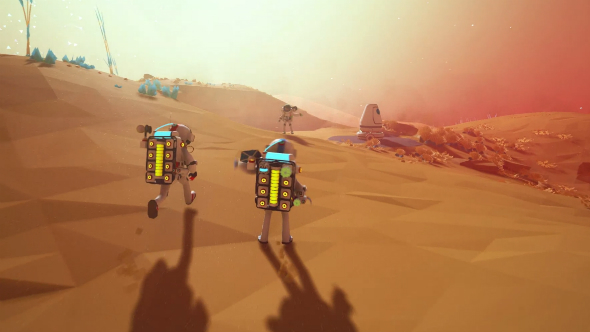 It’s fair to say that No Man’s Sky left quite a few people disappointed: its price has received a lot of criticism, it’s very repetitive, and not very fun – that last bit really riles gamers up for some reason. Understandably then, a lot of people are still waiting for a game to deliver on the hype that No Man’s Sky generated ahead of its release.

Want more from the inky black abyss? Check out the best space games on PC.

Astroneer isn’t that game: you’ll still be mining space rocks and trying to survive rather than getting into epic space battles and fraternising with alien factions. However, it is a marked improvement over No Man’s Sky in a few key areas, which is pretty impressive considering it’s only just entered Steam Early Access. 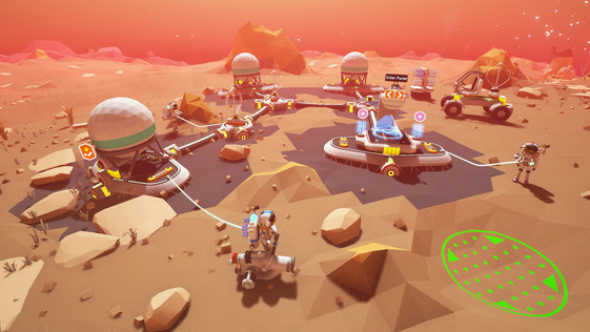 So it turns out after multiple debacles that No Man’s Sky isn’t a multiplayer game, and after a few hours of exploring the infinite unknown, you’ll start to feel pretty isolated. There are animals to briefly marvel at and NPCs to trade with and not understand, but other than that it’s you, on your tod, in infinite space, forever. If that doesn’t cause you to have an existential crisis, nothing will. Even with the Foundation update letting you recruit merchants to your base, the limited dialogue options only serve to press home how terrifyingly alone you are. They’re just there to sell you things, they couldn’t care less if you’re happy or sad.

Astroneer might lack frogmen and tentacled lions, but it does have four-player drop-in/drop-out cooperative multiplayer, which helps stave off both boredom and mortal angst. There’s plenty of fun to be had exploring a planet and expanding your base solo, but with three other players by your side it’s faster and more interesting. Astroneer’s multiplayer component comes into its own when exploring cave systems, where exploring is made easier and safer as players can share vital resources, excavate the terrain to overcome obstacles and weave a web of life-support tethers in barely any time at all.

It also has customizable rover vehicles, which means impromptu races and calamitous crashes that leave all four players miles away from a reliable oxygen source. Solving survival dilemmas on the fly is also more engaging with friends, as Tom Hanks taught us in that movie where he befriended a volleyball while on holiday. 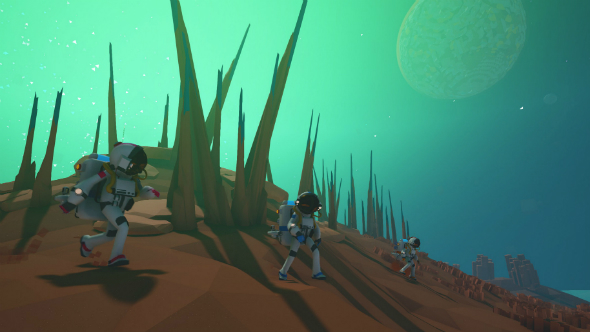 No Man’s Sky plonks you down on a largely uninhabitable planet with a broken ship, myriad ways to die and almost no direction whatsoever. Even when you get to your ship and figure out exactly what type of space rock you need to repair it there’s a baffling crafting system to overcome and a UI that’s incomprehensible for the first ten hours. All of this combines to make starting off in No Man’s Sky unnecessarily difficult considering how few systems are actually at play.

Like No Man’s Sky, Astroneer abstains from giving the player any context for their actions. You start off by picking a pod attached to a space station and blasting off towards your first planet. Once there, you’ll have a constant supply of oxygen and power provided you stick close to your shuttle. You’ll be told how to dig out resources and use them, and your spaceman’s backpack shows you how much oxygen and power you have left for when you need to venture further from home. The only apparent goal is to expand your base and research new modules, which eventually takes you to new planets, where the cycle starts anew.

Crafting is remarkably self-explanatory. There are no complex recipes for anything: most objects will need compound, new base modules require resin, while either copper or aluminium are needed to make practically everything else. Anyone can dive in and get a handle on the basics within their first hour. 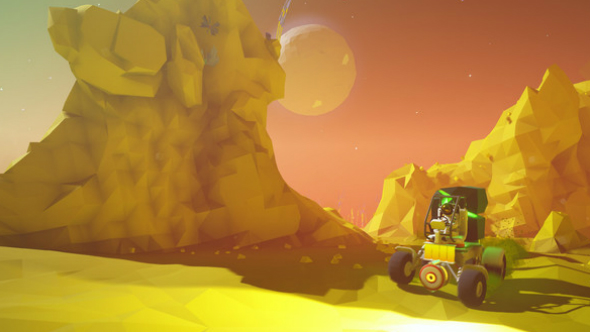 Astroneer doesn’t boast too much in the way of creative tools, but it does let you literally hoover up any terrain in sight. Likewise, you can also form your own terrain just as easily, so you can build a wall around your base to protect you from sandstorms, or build ramps to help you traverse cave systems and mountains.

The game’s modular construction tools are less freeing, but can be combined to make some pretty extraordinary creations. Take the humble rover for example: pop a wind turbine and some solar panels on it and it’ll replenish its own power. Alternatively, connect a second rover to your first one, then slap a crane on that, stick a drill on the end of the crane, then attach a third rover that’s covered with storage modules, and there you have it: a self-sufficient mining convoy.

The Foundation update has added a lot of creative freedom to No Man’s Sky, but outside of that base you still can’t leave much of a mark on a planet. Part of what makes Astroneer so addictive is how you can effectively make survival trivial by covering your planet’s surface and caves with tethers that keep you topped up with power and oxygen. After a few hours on your first planet you’ll be able to move on to a new world, but you won’t want to leave the little sanctuary you’ve built for yourself.

Got some thoughts of your own on Astroneer? Let us know in the comments below.