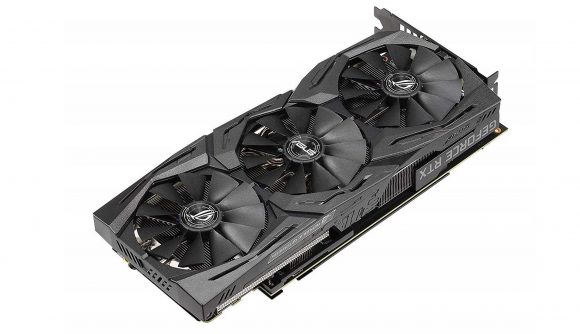 With its finger ever on the pulse of PC culture, Asus has jumped onto the biggest thing to happen to computing all year – cryptocurrency mining. Sadly though the year in question happens to be 2017, so it’s a shame Asus waited until the bottom had dropped out of the market before offering users the ability to make money from their idle GPUs.

Asus is now publicising a partnership with Quantum Cloud with its graphics cards, a service which utilises the cryptographic power of your graphics card to generate money when you’re not otherwise using it for important things, like shooting virtual people or managing theme parks/hospitals/football teams.

On the face of it it’s something of a no-brainer. The service is GDPR compliant, so doesn’t take any of your private data with which to share to the wider world, deliberately or accidentally, and nor does it store any of your financial info either. Quantum Cloud will just give you money through PayPal so you don’t even need to go through the traditional crypto-rigmarole of cashing out a complex wallet.

But it’s late. So late. About nine months too late. Crypto-mining is so last year, and we’re not even into next year yet.

It’s the thing responsible for wiping millions off Nvidia’s revenue, stopping the company from even bothering to ship new mainstream cards into the market for another three months at least. And it’s not just Nvidia that has been suffering, AMD’s seen a dip in revenue because of it too, with Jon Peddie Research stating that Q3 has been the worst quarter for over ten years in terms of graphics card sales.

A pox on your house, crypto-mining! 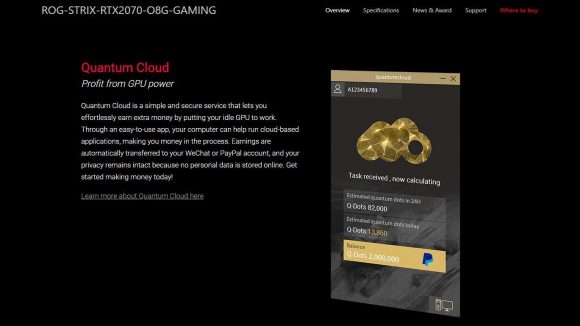 But that hasn’t stopped Asus from jumping into bed with Quantum Cloud to try and squeeze the last little bit of financial gain from the diseased donkey that is GPU mining. The company suggests that a typical GTX 1070-based system will generate 20,000 Quantum dots each day, which will deliver $10 into your bank account every month.

“You won’t get rich quick,” says Quantum Cloud, “but you can earn some easy money with your idle GPUs. So, what are you waiting for?”

Maybe you should be waiting to see if you could realistically actually make any profit from generating $10 per month considering the amount of electricity you might have to use to hit that 20,000 Quantum dot goal. Indeed, Hard Fork is reporting that the announcement press release notes that neither Asus or Quantum Cloud “guarantee that users of its software will make any earnings or profit” and that users are the ones which should pay particular attention to “considering their own usage costs.”

Personally, I’d leave the Quantum Dots to your monitor and keep your GPU for gaming.