The stunning ultrawide Swift represents another step forward in the quest for the perfect gaming panel, but demands a king’s ransom in return.

Read more: check out our pick of the top gaming mice around today.

Until recently, monitor technology has slimed along at a snail’s pace. I’ve had an 30-inch, 1600p Dell IPS monitor hooked up to my test rig for the last decade and it’s only now starting to show its age. That’s because all of a sudden new display technologies are being released at an unprecedented rate and, combined with increased demand for higher-end panels, that means we’re seeing generational monitor iteration rapidly speed up.

And as much as Dell and LG are capable of creating lovely monitors for working on, if you’re after a glorious gaming screen then right now you probably either go for an Acer or an Asus. And generally it runs thus: if you need to consider financial constraints then it’s Acer’s Predator range, but if you light your cigars on bank notes then you’ll want an Asus Swift.

Asus’ first Swift, the PG278Q, was the world’s first G-Sync monitor rocking a 144Hz refresh rate and a 2560 x 1440 native resolution. And a lovely thing it was too, justifying its Swift title in every conceivable way. They then released an updated version, the PG279Q, which to my mind is the best gaming monitor you can buy right now. They updated the panel from TN to AHVA technology and boosted the refresh rate from 144Hz to a heady 165Hz.

What can the RoG Swift PG348Q add to the mix then, when Asus have already released the best? This time it’s all about the ultrawide aspect ratio, with Asus birthing a curved 34-inch panel into the Swift family. Shot through with the DNA of the previous two Swift gaming monitors they are surely onto a winner.

The RoG Swift PG348Q may not be able to hit the 1ms response time some gaming-focused monitors like to shout about, but that’s because it’s using a superior panel technology than those TN-sporting blowhards. In-plane switching (IPS) panels deliver far better white saturation and more vibrant colour reproduction when compared with the older, uglier twisted nematic (TN) tech. And with a 5ms response time this Swift is hardly what you’d call sluggish either.

The 21:9 Swift is inevitably using a different panel than both Acer and Asus have used in their competing 16:9 Predator and Swift models. It’s one which doesn’t have the same ‘wow-factor’ the AU Optronics panel in those monitors can deliver, but is still a rather lovely thing to spend your days staring at.

The pixel pitch is as tight as those 16:9 1440p screens though, making the PG348Q’s display super sharp. It also has the typically vibrant colour reproduction we’ve come to expect from decent 8-bit IPS panels, as well as the excellent white saturation too. What is more of a surprise though is just how well the ultrawide Swift handles black levels. Traditionally that’s where IPS monitors fall down, but the LG-manufactured panel Asus have used here shows clear delineation between different shades. As a result its contrast levels are excellent too. 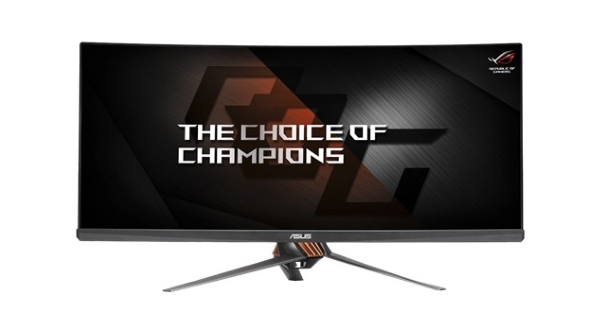 IPS displays also deliver excellent viewing angles and, while that’s not a huge thing for a monitor where the user is likely to always be sat directly in front of it, it makes a big difference on a 21:9 panel. If the viewing angle is poor, the edges of the display would show obvious variation in colour consistency. There’s a relatively shallow curve to the Swift PG348Q though, which means it doesn’t distort the image too strongly when you’re just working on the desktop, but gives a little extra level of immersion in-game.

I have to admit I’m still not hugely sold on the value of a curved screen. What they add in-game is so tenuous that it feels more like a gimmick than anything of real tangible benefit – especially when the curve is so shallow. I am though utterly sold on the benefit of 21:9 ultrawides. So long as the vertical space is at least 1440 lines high they’re fine to use on the desktop, but it’s when you boot up a game across the full width of the screen that the extra screen space really hits you. The extra width means a 34-inch display can almost fill your vision and that, more than any curve, is what really adds to your gaming immersion.

The PG348Q is also sporting Nvidia’s G-Sync module, delivering hardware-level frame synchronisation on GeForce graphics cards, smoothing out the tearing you get without VSync and fixing the judder you get with it. My previous pick of the ultrawide brigade was Acer’s XR341CK; another curved 21:9, 34-inch screen with a fantastic IPS panel. Its more affordable price tag stems from the fact it favours AMD’s FreeSync tech instead.

The Asus Swift PG348Q just has that Acer pipped in the image stakes, which might come as a surprise given they’re both using the exact same LG panel. What Asus have done is embody the original spirit of the Swift and introduce a level of panel overclocking which enables a boost to the panel’s native refresh rate of 75Hz up to 100Hz. Acer have also introduced a G-Sync version of their 21:9 monitor, the Predator X34, which has an almost identical spec (and price tag) to this Swift, making for another head-to-head battle between the monitor heavyweights.

At 100Hz the display is beautifully-smooth. Not quite up there with the PG279Q or Acer XB271HU in those stakes, with their 165Hz refresh rates, but it’s a massive step up from the standard 60Hz level most of us have long accepted. I haven’t been able to detect any input lag with the high-resolution, ultra widescreen display either. 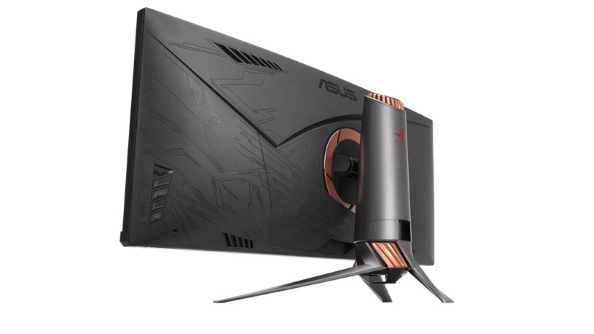 The Asus Swift’s panel and feature set is exemplary then, but what of the chassis it’s housed in? Design-wise the brushed aluminium look is stylish and relatively subtle for a gaming screen. The recessed bezel gives the effect of the panel going right to the edge of the chassis and that curve does give it some visual appeal too.

It is though sporting a rather odd stand. Mechanically it comes with height and tilt adjustment (but no swivel, for obvious, curvy reasons) but aesthetically the twisted, angular feet leave me feeling a little off-kilter. Maybe that’s just a trace of my in-built desire for symmetry in all things, but personally it doesn’t do it for me.

As a Swift it also has to come sporting Asus’ ‘Light in Motion’ setting. In the PG348Q that means a red LED projection from the base of the twisted stand which wouldn’t look out of place on the dashboard of a Klingon Bird of Prey. Alongside a swaying hula-girl with a ridged forehead and a pine-scented air-freshener in the shape of a bat’leth. 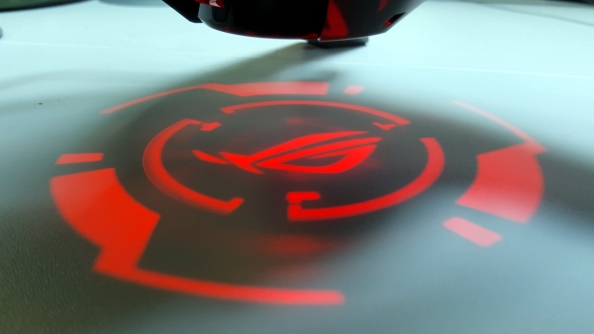 Monitor controls are generally the weakest part of the package, but Asus have used the same five-way mini-joystick design they used with the PG279Q. Being able to navigate the on screen display without having to press different, hidden buttons makes setting things up a breeze. And when you’re switching between genre-focused presets (FPS, racing, etc.) that’s a god-send.

Weird, askew stand aside, I’m really struggling to find any negatives in my testing of the ultrawide Swift. The panel is vibrant and crisp, the refresh rate slick and the feature-set excellent. The only real problem then is the fact that this is a $1,300 (£999) monitor at best. That’s a huge amount of cash to spend on a display, even on one as good as this. A few years ago it wasn’t such an issue to spend big on a quality monitor with the pace of technical iteration as glacial as it was. Now the refresh cadence is ramping up to such a point a pricey monitor is no longer guaranteed to leave you feeling so warm and fuzzy a few years down the line.

That said, with a crisp, bright IPS display, and high native resolution, the Asus RoG Swift PG348Q is still going to be a pleasing thing to game on for years to come. Whether it’s a grand’s worth of pleasing depends on how healthy your bank balance is looking right now.

So, you can save money picking a cheaper, but still impressive, 34-inch ultrawide…but the tragedy is you’ll still be thinking of this rather stunning 21:9 Swift.