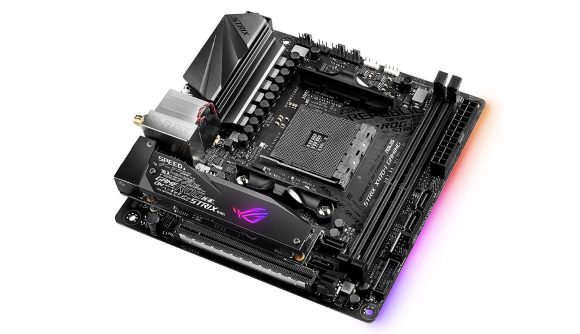 Asus has officially confirmed which of its AMD Ryzen motherboards are going to get a BIOS update to make them compatible with the next-gen Ryzen 3000 processors. In total there are 35 of its 300 and 400-series motherboards which are set to get the update for AMD Zen 2 compatibility, but notably it’s only the X470, B450, X370, and B350 boards in line for the new microcode. Anyone sitting on a bargain-basement A320 board is going to have to upgrade their mobo if they want to ride the next generation CPU train.

The BIOS updates haven’t been dropped as of yet, but each of the motherboards on the list will definitely be receiving a Ryzen 3000 BIOS once it becomes available. You’ll be able to download the updated firmware from your motherboard’s product page, and if you need help getting your BIOS updated then we’ve got a handy video guide below. Ain’t we good to you. Be warned, it does contain a Jacob, however.

If your AM4 motherboard isn’t noted on the Asus BIOS hitlist then belay that wailing and gnashing of teeth for now. Your dentist might well be grateful for the work, but all is not lost just yet. This 35 board list isn’t the final update notice, Asus has said that “additional motherboard models will be added to the list soon.”

Asus released the statement yesterday, putting concerns that 300-series motherboards wouldn’t be getting a Ryzen 3000 update to rest. MSI had to do the same thing a couple of weeks ago when a rogue customer services agent “regrettably misinformed” one of its X370 motherboard users saying their board wouldn’t be supporting the new Ryzen 3000 processors.

Chip shot: These are the best CPUs for gaming right now

MSI has announced support for 46 boards so far, but is also eschewing its A320 boards. Those are likely the boards with BIOS chips that won’t be able to contain the fully updated firmware, a reason posited for why some 300-series mobos wouldn’t get next-gen CPU support.

This is the full compatibility list of Asus and MSI motherboards getting Ryzen 3000 support, check to see if your mobo’s getting the Zen 2 goods.

So that’s your lot for now, but remember, if your board isn’t on the list right now don’t despair. It may get added in later, so keep checking your board’s product page if you’re hoping for an upgrade to the Ryzen 3000 processors.

Of course, you could always wait it out for the X570 boards to get announced at Computex next month, hopefully alongside more news about when we’ll actually get our hands on new CPU silicon too. Biostar has teased it’s going to be showing off a new generation of Zen 2 compatible boards at the Taipei show, so we don’t have long to wait.