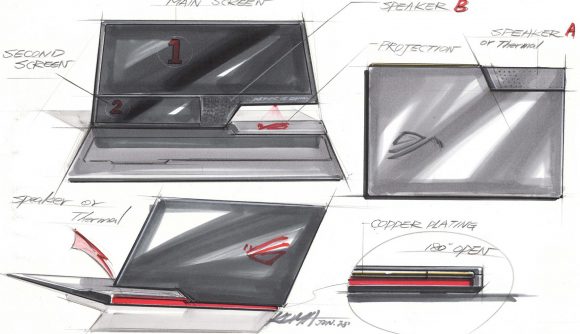 With the arrival of Intel’s 9th Gen Coffee Lake CPUs and Nvidia’s RTX 16-series graphics cards for laptops, Asus is looking to expand the Republic of Gamers market a little further than its usual brief. Since most of us use our laptops for much more than gaming alone, Asus wrangled up the design experts from BMW Group Designworks to help push beyond its usual 1337 style and incorporate some forward-looking technologies (read: lasers) into its designs.

ASUS ROG is known far and wide for its signature style and colourway: red and black. But this gaming aesthetic is a divisive one. If you love it, great. But if you’re like me and prefer something a little more Scandinavian and acceptable to reach for during a meeting, you’re probably going to end up looking elsewhere. And that sometimes means sacrificing gaming chops along the way too.

But the gaming laptop audience is expanding, and aging, so gone are the days when Asus ROG would cater solely to moody teenagers. Instead it’s looking to mature its designs a little. Enter: ROG Face Off.

Unfortunately John Travolta was nowhere to be seen, but we did find face-to-face one of Asus’ technical marketing team, Geoff Gasior, to talk about the project in more detail.

On-the-go accuracy: These are the best gaming mice

“Part of the initial concept was multiple personalities,” Gasior says. “Gamers don’t just play games. And gamers play different kinds of games. And gamers do different kinds of other activities. So let’s try to make a laptop that can have different personalities, but also not with the typical gamer look because a lot of people that play games don’t necessarily want to go into a coffee shop, open their laptop, and have everybody around be like: ‘oh, you’re a gamer.’ It’s a cool look if you want that, but the gaming audience is getting older as well.” 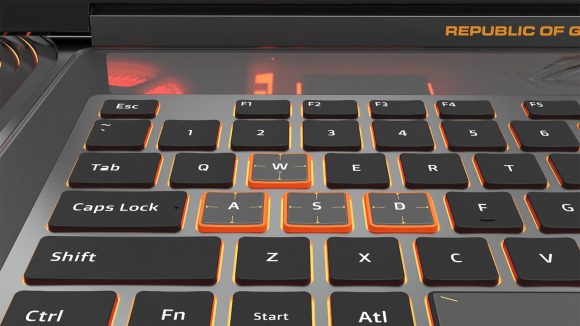 The concept laptop on show blends various concepts into a single device, acquiescing to the needs of both gamers and professionals. Some of the cosmetic changes brought about by Designworks include a move toward flowing lines and a more curvaceous chassis, a notable change from Asus’ straight-cut approach of the past. The BMW Group company also incorporated a new colourway into the mix: jade-tinted silver.

“As we’re trying to expand beyond just the gaming market, going to try to appeal to a broader audience.” Gasior continues. “And part of that is bringing in new ideas about how the laptop looks and then also what you can do with it.”

But not every new concept is an aesthetic one. One example is the power button. Modelled after a bolt-action rifle, it features a spring-loaded design to “evoke a deeper physical connection with the machine”. That’s top car design spiel right there. This switch actuation is accompanied by a lighting shift: either all-white for work mode or red glow for gaming.

Don’t expect to see the Face Off prototype design as a fully formed laptop anytime soon, but it has already filtered into some of Asus’ recently announced 9th Gen Intel gaming laptops, including the Hero III, Scar III, and ROG Strix G. Some of the design choices on these laptops were first conceived thanks to Face Off, including asymmetrical ventilation, a corrugated chassis for improved airflow, and even the precursors of what would become the Asus Keystone: a removable proprietary device that stores user profiles across devices and acts as a safe space to store your most treasured secrets. 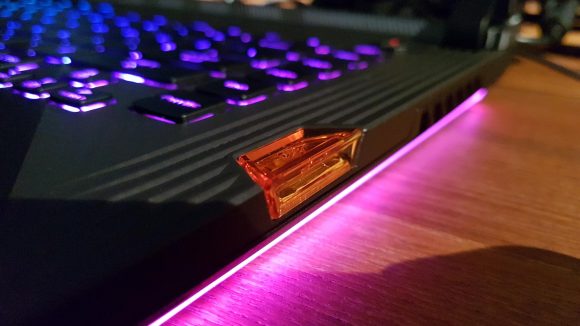 But some of the ideas from the collaboration have proven too futuristic for today’s tech. Asus has also been looking into augmented reality, with “virtual elements that rise up from the laptop” and controllable by a user’s gestures being discussed. These are still very much in their embryonic stages – and even that might be a stretch – but Asus hopes to one day incorporate projection and tracking technology down the line to create a personalised experience that goes beyond surface-level RGB lighting.

“We collaborated to explore ideas for not only the next generation, but also the ones after that,” Vivian Lien, global head of marketing, says, “culminating in a stunning concept that gives a glimpse of what’s to come. We’re excited to see how laser projection and other augmented reality technologies develop and are eager to experiment with integrating them into future designs.” 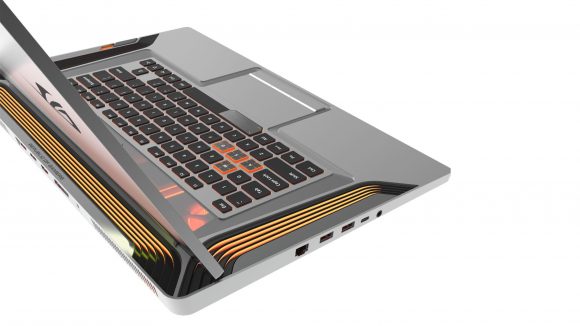 At least for the time being the prototype is allowing Asus to better balance professional and gamer styles. We’ve already seen its rivals adopt similar pared back gaming fare to appeal to this audience – the Razer Blade is a rather moderate design – and this segment is only going to heat up as more dyed in the wool gamers start streaming, creating content on the move, and marching towards geriatric life.

All I’m saying is that at some point there’s going to be a market for stairlifts with 480Hz monitors attached. And while my eyes will be all but totally worn out from decades in front of a monitor, I’ll be here to review it when that day comes.

We may have to wait a little longer to get our hands on augmented reality, gesture-controlled laptops, but the idea of maturing gaming design to meet the expanding audience is something that appeals to my old soul. And I’m keen to see where Asus can take ROG, the brand champion of old-school gaming style, in the highly-competitive gaming and content creation laptop market.