Mini-ITX motherboards are the perfect embodiment of the fact there are now precious few compromises to creating the rig of your dreams. Do you want some hulking workstation beast or do you want a micro machine capable of delivering gaming performance that would make Project Scorpio blush with shame? If it’s the latter the Asus ROG Strix Z270i Gaming could be the mini motherboard for you.

Want to see how the 200-series mobos are lining up? Check out our guide to the best gaming motherboards of today.

That’s especially true you’re also into your RGB LEDs too, because this teeny tiny board is lousy with them. For anyone who wants to make their PC look like the 70’s dancefloor of Studio 54 that will come as welcome news, for those after a visually quiet life, maybe not so much.

But performance and versatility is more important than mere aesthetics and thankfully this $200 (£193) miniature Republic of Gamers board can claim all three.

Click on the jump links below to leap to your destination double-quick. 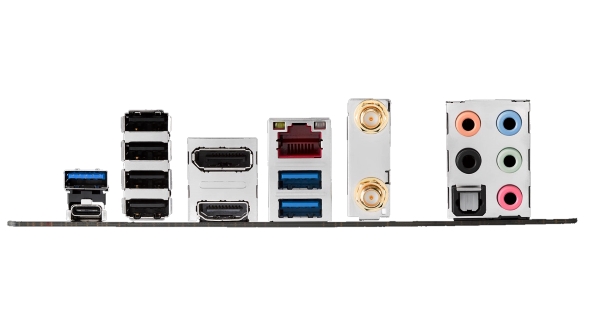 Obviously the key spec is the board’s form factor. The mini-ITX motherboard standard ensures its footprint is just 17cm x 17cm but thanks to the way so much traditional board logic has been shifted onto the CPU that doesn’t mean you’re losing out in terms of the ROG Strix Z270i’s functionality.

Pretty much the only thing a mini-ITX board can’t do anything about is the form factor constraints and that means there’s no chance of additional PCIe x16 slots for any multi-GPU fun. Now ,admittedly that’s a loose interpretation of the word ‘fun’ in the context of the potential nightmare SLI/CrossFire gaming can be…

You’re also only ever going to get a pair of DIMM slots for your memory too, but seeing as dual-channel is all the Z270 chipset can handle, and you can easily get high capacity memory kits with just a pair of sticks, that’s not too great an issue. Indeed the ROG Strix Z270i is capable of dealing with memory speeds all the way up to 4,266MHz in capacities up to 32GB. And that’s more than enough for most of our needs, right?

Storage is the other place where the limitations of the mini-ITX form factor can be an issue, but as well as offering four SATA 6Gbps connections on the board Asus have also found space to add in two M.2 sockets. One is shielded under a metallic heat spreader by the PCIe slot and another is underslung to sit in the space between the board and the chassis mounting plate.

The micro ROG has also got a pretty decent spread of USB connections on the rear of the board, with seven full size ports (three USB 3.0 and four 2.0) and a single Type-C reversible connection.

And if you’ve spent big on one of Asus’ Claymore keyboards you can link your ROG gear up to synchronise all the lighting from your desktop to your motherboard to give your setup that proper disco vibe. There’s even an RGB header on the board too so you can add more RGB LEDs to the mix. Just how important a feature that is really depends on how much more of this ^ you want to see… 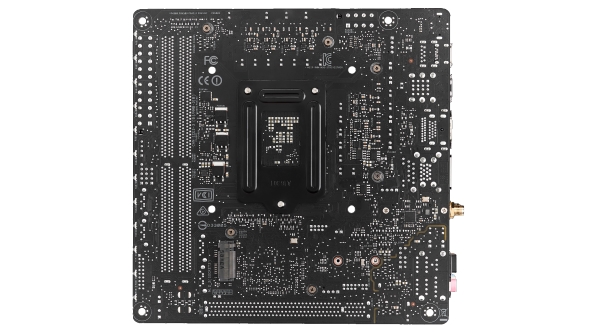 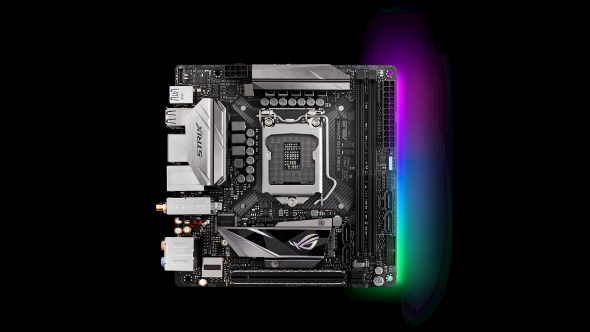 If you’ve been keeping tabs on our Kaby Lake coverage you’ll know that in performance terms there really is precious little to choose from between the different Z270 boards we’ve tested. Even the H270 numbers aren’t too far off the top-spec chipset if you look past the lower memory frequency limitations.

And that’s definitely the case with this mini-ITX Strix board. The ROG Strix Z270i delivers both CPU and gaming performance that’s absolutely on par with even the big boy boards and generally ahead of the only other mini-ITX Kaby Lake mobo we’ve seen so far, the Fatal1ty Z270 Gaming-ITX/ac from ASRock.

The memory and storage speeds are particularly impressive too, easily beating the ASRock and oftentimes ahead of full ATX boards. There is simply no performance compromise with this small form factor board, even down to its overclocking chops. Our latest i7 7700K sample is more capable than our first review chip and the ROG Strix Z270i allows it to reach its 5GHz limits stably. And even then it wasn’t blazing hot either. At stock speeds the Asus board is impressively cool-running and even overclocked it wasn’t breaking the 86°C mark.

I did experience a few issues running our Crucial DDR4 memory kit above the 2,133MHz point a couple of times. Pushing it up to its 3,000MHz XMP speed sometimes had the board refusing to POST until I’d reseated both the RAM and CPU. After that it was fine to go beyond – easily up to our test speeds of 3,200MHz – and that memory hiccup only spasmed twice during my testing and could have been either the memory or the CPU playing up. That said I have used both in the ASRock mini-ITX board without issue. 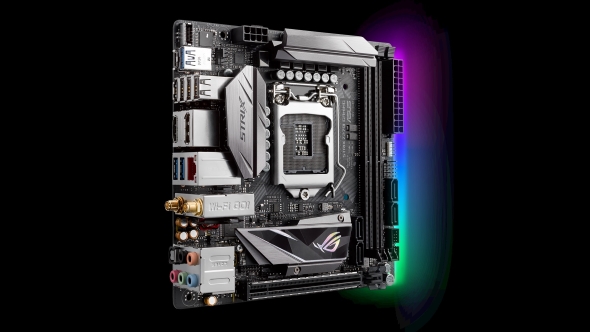 Asus’ top-end mini-ITX board is an excellent example of the power you can fit into a tiny package with the latest Intel platform. The combination of Kaby Lake CPUs and the 200-series chipsets mean there is zero performance compromise in choosing the smallest mobo form factor. And there’s something about the diminutive scale of these powerful boards that really ticks the nerdy boxes in this geek’s heart.

I’m not entirely sure how long I’d be able to cope with the strobing rainbow effect from the RGB LED downlighting under the board, but there’s something about just how ultimately unnecessary it is that still makes me smile. You can of course just turn it off, or switch it to a more subtle, static hue, if it really starts to get to you.

The frustration though is that if you want a mini-ITX Z270 board you have to go for a premium option. The ROG Strix Z270i is no budget choice, costing the same as the full-scale Strix boards or those from MSI and Gigabyte. There are currently no mainstream mini-ITX Z270 boards around at the moment, and that means you still have to pay a premium for the form factor.

But considering the performance and the feature-set of the Asus ROG Strix Z270i Gaming you can understand why it’s got the price tag it has. In the end then it’s a mighty fine, no-compromise 200-series board, perfect for the micro gaming rig you’ve always wanted.