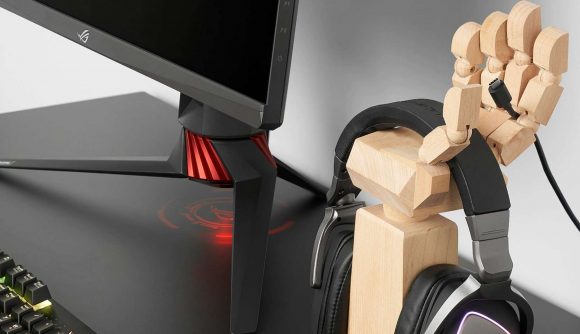 If you’ve managed to get your hands on the best gaming headset, you’ll want to treat it with the care and respect it deserves – after all, it’ll last longer that way. But instead of the bog-standard metallic RGB headphone stands currently on the market, you’ll soon be able to rest your expensive pair of cans on much more interesting alternatives, like this hand-shaped accessory from Asus and Ikea.

We call it an accessory rather than a headphone stand because it’s much more versatile than others in its category. Not only does it keep your headset safe from bumps and scratches, it can act as a bungee to keep the wire of the best gaming mouse from dragging along the desk or getting tangled by propping the cable between its fingers. It might even be able to hold up your Nintendo Switch in style, although we’re not sure how sturdy the base is just yet.

Better yet, it can give you a much-needed high five when you snag that hard-earned victory. We’re not saying you need that kind of validation, but we do.

This comes as a part of the ‘LÅNESPELARE’ gaming furniture line from Ikea’s recent collaboration with Asus, arriving alongside 29 other products including gaming desks, an ROG-themed cushion, and a drinks holder.

Although the range launched in China last month and is due for release in Japan sometime in May, the rest of the world will have to wait until October to be able to get their hands on the range from local vendors. If the Chinese pricing is anything to go by, however, the headphone stand won’t be too expensive as it currently sits at the equivalent of $20.