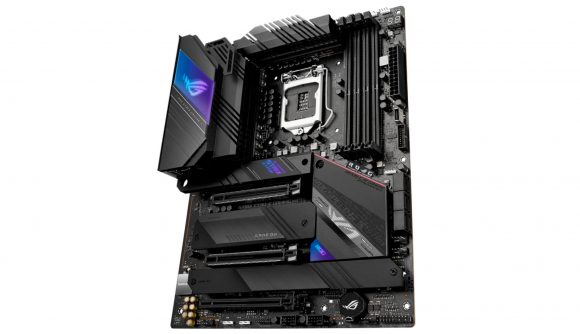 The best SSD for gaming is an NVMe drive, but before you can finally wave goodbye to long loading times, you must first brave the fiddliness of installing the thing. The M.2 interface uses some of the smallest screws in PC gaming, and while the best practice is to lay your system flat and let gravity do half the work, it’s easy to fumble and lose them in the process. Fortunately, Asus looks like it has the answer.

Alongside its new Z590 motherboard range, Asus has introduced the M.2 Q-Latch – a pre-installed screw that holds down a white piece of plastic and makes M.2 installation far easier. You’d be forgiven for thinking you’ve accidentally snapped something given how out of place it looks, but with it you can simply plug in your new M.2 SSD, press down, and swivel the plastic to keep the drive in place – no screwdrivers necessary.

It looks like the M.2 Q-Latch is missing on high-end motherboards like the ROG Maximum XIII Extreme and Hero, according to their product pages, but is present on other premium offerings in the ROG, Prime, and TUF line-ups. Hopefully it’s something that will work its way into all ranges, given the simplicity of it.

With the shift to PCIe 4.0 in motion and ratings climbing as high as 7,000MB/s read speeds and 6,950MB/s write speeds, there’s a bigger focus on heatsinks to keep drives at peak performance. While it’s been a blessing for us to receive built-in heatsinks with motherboards over the past few years, we’re not sure whether the M.2 Q-Latch will play nicely with all of them.

The ROG Strix Z590-E and Z590-A both boast the feature and built-in heatsinks, however, so it looks as though Asus has thought of everything. Better yet, these heatsinks look like they’ll feature larger screws, doing away with the notoriously small screwdriver we often have to dig out of the back of our toolbox.

If you stumble across a model that doesn’t have an included heatsink, it seems, at first glance, as though Corsair’s fastest SSD yet will be compatible with the mechanism – this is something we’ll need to confirm when we get our hands on the new gadgets.

All in all, Asus’s M.2 Q-Latch is a quality of life addition that looks like it’ll make building a gaming PC far less laborious and allow us to get back to playing games much quicker. Fingers crossed other vendors take note and start thinking of their own toolless solutions moving forward.