To build one of the best gaming monitors you have to follow a simple recipe. First, a decent panel capable of high refresh rates. I’ve a penchant for IPS panels, but VAs are often acceptable surrogates when contrast is key. Second, resolution. 1080p is fine, but 1440p is the ideal middle ground shy of the demands of 4K. Following that, a little Adaptive Sync (or G-Sync if you can) to top it all off. Pop that into a mixing pot and you’re well on your way.

The Asus VG27AQ ticks all the boxes befitting most dream gaming PC setups. It’s a monitor equipped with a heavy-hitting feature set of the most in-demand features we crave, and it’s all under the rather sensible TUF Gaming umbrella, too. Not the least of which is the superb motion blur reduction technology courtesy of Asus ELMB Sync.

If you didn’t catch Asus’ announcement last year then you may have missed ELMB Sync, so here’s the low-down. 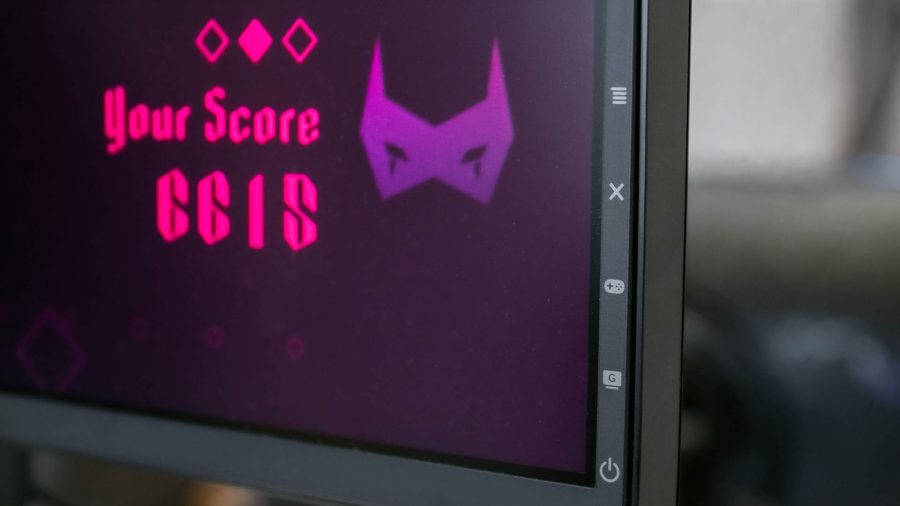 While a mighty graphics card may churn out frames like there’s no tomorrow, that doesn’t always sit right with your monitor. If left to their own devices the two can often fall out-of-sync. Hence the introduction of variable refresh rate (VRR) technologies, such as AMD FreeSync and Nvidia G-Sync. Their sole purpose it is to minimise screen-tearing, input lag, and artefacts for a smooth gaming experience by keeping your tech in check. They also reduce, but do not 100% remove, ghosting and motion blur frame-to-frame.

The Asus VG27AQ is capable of both VRR and ELMB simultaneously

That’s because there’s always a smidge of motion blur inherent within LCD displays. That’s the time it takes for a pixel to react to input data.

CRT monitors, you know those ace ones you all threw out (animals!), circumvent this issue. The draw technique and speed of a CRT – scanning from the top to the bottom of the screen every frame – allows these panels to natively avoid ghosting by virtue of their mere existence alone. In modern LCD land, where the backlight never truly fades, reducing ghosting requires an active solution. It’s all quite poetic. 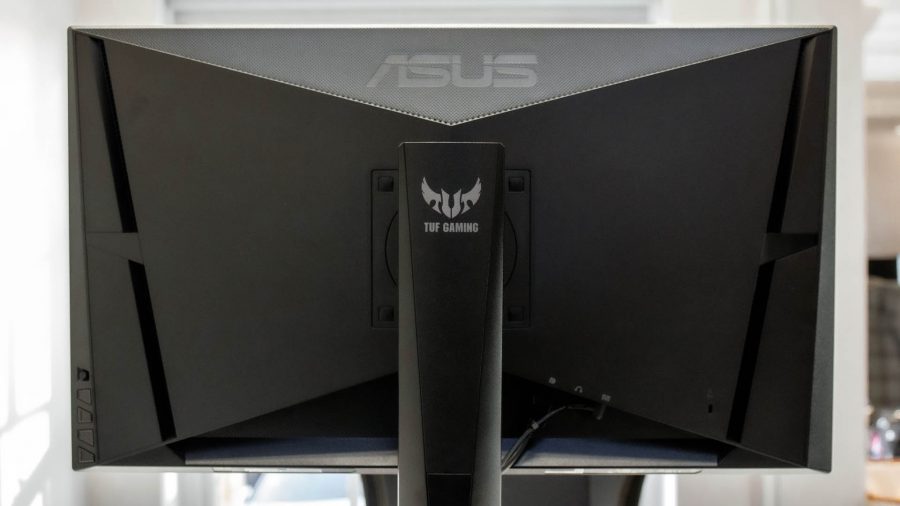 That’s where ELMB, or Extreme Low Motion Blur, comes in. By strobing the backlight between frames, on/off in an instant, monitor manufacturers found they could replicate a little of that CRT magic and reduce a user’s awareness of pixel stick-to-it-iveness – thus reducing ghosting in modern LCD panels. The only issue for us gamers is that this technology doesn’t always play nice with VRR technologies.

So it’s a decision between tear/stutter/lag-free gaming or a little bit of motion blur. Easy decision, right?

But what if I told you (to quote Asus and/or 16th century England) you could have your cake and eat it. The Asus VG27AQ is equipped with newfangled technology capable of both VRR technologies and ELMB simultaneously, ELMB Sync, ready to bust those ghouls right out of that monitor. Paired with a 165Hz (with overclocking enabled) IPS panel, the end result is buttery smooth gameplay without fail – and without compromise.

With flexibility for any GPU configuration, providing its got at least the grunt to keep your games running above ~60Hz (below which all this adaptive tech goes a little haywire), and plenty of panel real estate to play with at 27-inches, the TUF delivers in swathes. 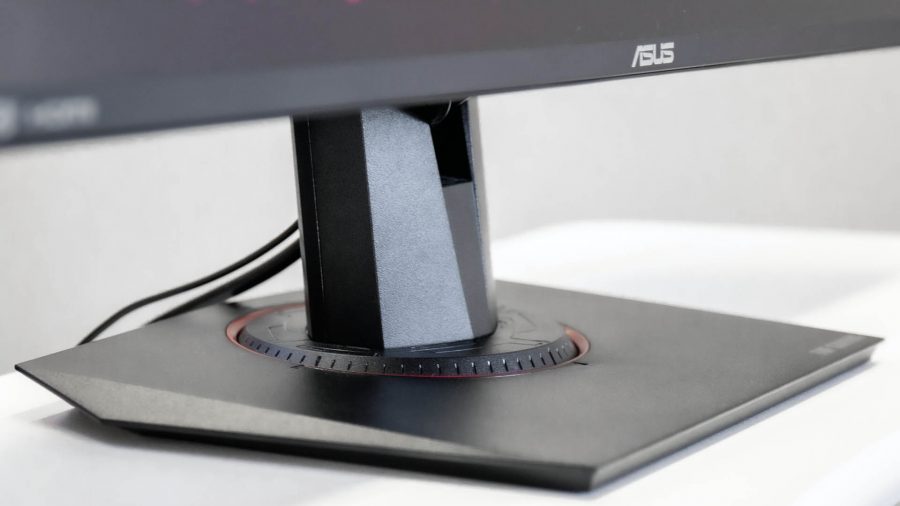 The AUO panel within is able to deliver an impressive gamut of colour, which, when paired with superb black levels and decent white saturation, delivers an impressive span of depth and rich tones in any game. Sayonara Wild Hearts is a stunning example of the vibrancy and generous saturation on offer.

It’s only the VG27AQ’s claim to HDR that has me bent out of shape. It’s rated to 350cd/m2, usual SDR fare, and it’s not a bad performer in that bracket either. But make no mistake, the panel is not rated to the widely adopted DisplayHDR standard, even the lowest DisplayHDR 400 tier which itself is arguably not ‘true HDR.’ If anything it’s a fine example of why VESA went about creating touchstone HDR specifications in the first place. Therefore we’re calling this one out for technical marketing bobbins. 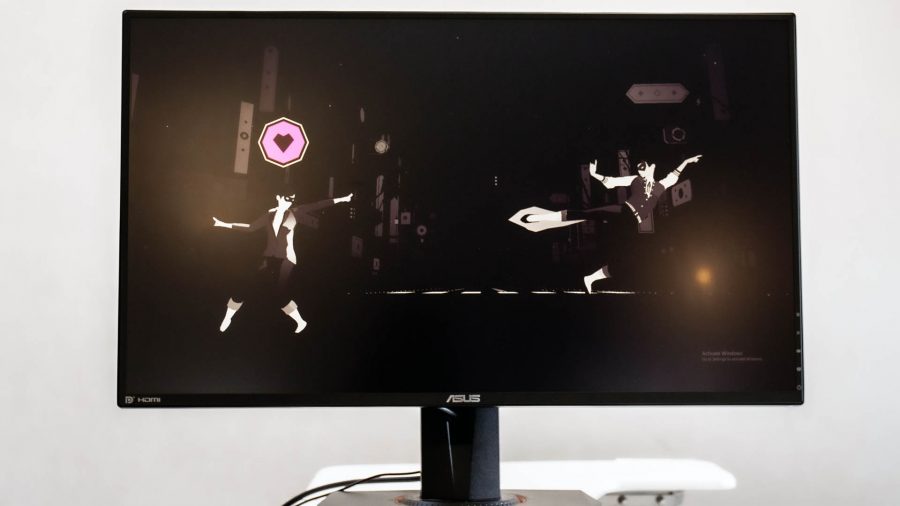 Blunder aside, the successes of this monitor beyond the panel are evident. The stand is a chunky yet dependable design with full tilt, swivel, pivot, and height adjustment functionality, and you’ll have no issue tailoring it perfectly to your setup at home. The slim bezel is as non-intrusive as you’re going to get in this price bracket, too.

As a TUF branded model, and to its benefit, the VG27AQ has been aesthetically toned down and curtailed – where Asus has spent its budget, it’s spent it well. There are no ROG laser beams or RGB lights, and any USB ports once destined for its rear were left on the cutting room floor. In their stead is a modest yet functional design, joystick OSD controls, and well-labelled shortcut keys. On the underside there are twin HDMI 2.0 ports, a single DisplayPort 1.2 port, and a 3.5mm jack.

The VG27AQ offers a stellar specification sheet in its price bracket and delivers domineering performance. Available for $444 (£485), it’s a highly competitive gaming monitor that’s sure to see you through a GPU generation or two – as all great monitors should. If you’re in the market for a dexterous monitor with depth to match any game or any media, the Asus TUF Gaming VG27AQ comes highly recommended.

Straddling both budget and enthusiast markets, the TUF Gaming VG27AQ features all the tell-tale characteristics of a high-end monitor without any of the frivolous excess.