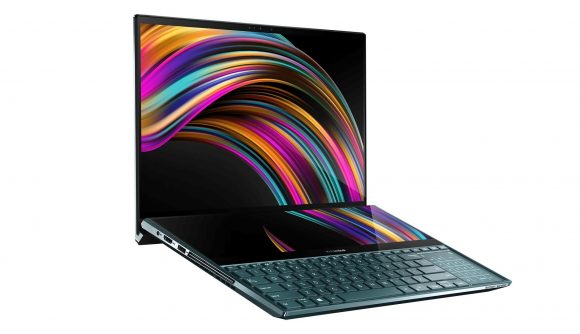 Streamers, content creators, and obsessive multitaskers gather round. It’s not often that Asus’ ZenBook lineup manages to get a mention here at PCGamesN, but the company’s latest dual-screen, 4K, Nvidia RTX-powered creation might have just earned itself a place on the feed and in streamers’ hearts.

The Asus ZenBook Pro Duo comes equipped with dual 4K, touchscreen panels. Where? Right where the keyboard usually sits. Asus has shifted both the keyboard and trackpad into a single unit at the front of the device to make way for that second screen. The half-height panel, nicknamed ScreenPad Plus, works like any secondary monitor connected to the system might and packs enough pixels to ensure there’s no need for scaling as applications move between displays.

Any app can be dragged onto the second panel, meaning the discerning streamer is free to run a game up top, while the usual suite of apps – be that Streamlabs OBS, Twitch, or Spotify – can be easily monitored from the secondary panel below. The full-width ScreenPad display has space for three side-by-side apps snapped alongside one another.

And while most laptops might struggle to churn out enough horsepower to both play and stream a game at once, the ZenBook Pro Duo, despite its business facade, is available with both an Nvidia RTX 2060, which takes care of the gaming side of things, and up to an Intel i9, octacore processor. So that’s streaming sorted, too.

And the ZenBook Pro Duo remains a relatively lightweight and compact design despite the tech inside. An Asus rep assures me it can handle the heat, but I’m yet to be able to put this to the test myself with an intensive gaming/streaming workload.

Local gaming: These are the best graphics cards right now

We first saw Asus tinkering with a dual-screen design last year with Project Precog: a laptop comprised entirely of displays. Asus and the BMW DesignWorks team also tinkered with the idea of dual-screens with their Asus ROG Face off project earlier this year. 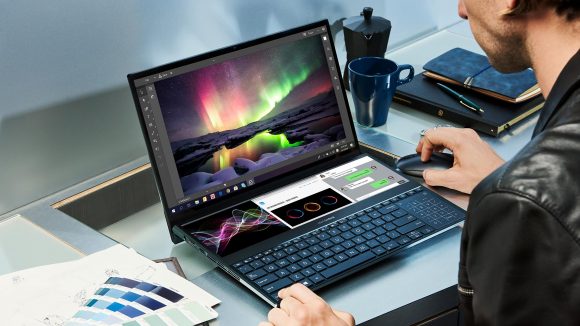 An Asus spokesperson also hinted the price wouldn’t be too extravagant – or at least maybe not quite as much as you might first think. The Pro Duo should land at around £2,500/3,000 at launch depending on CPU loadout, although that price is yet to be confirmed via the official channels.

A laptop is likely not a familiar prospect to most streamers and often with good reason. There’s that small matter of heat and where it all ends up – the last thing you want is your stream coming to a standstill due to overheating components.

But maybe there’s some hope for a portable devices so chock full of the latest tech it will make that prospect a little more attractive. It wasn’t all that long ago that Asus demonstrated its thin and light Zephyrus to be capable as an on-the-go streaming machine, and if that’s the little PC that could, then maybe the Pro Duo stands a chance.