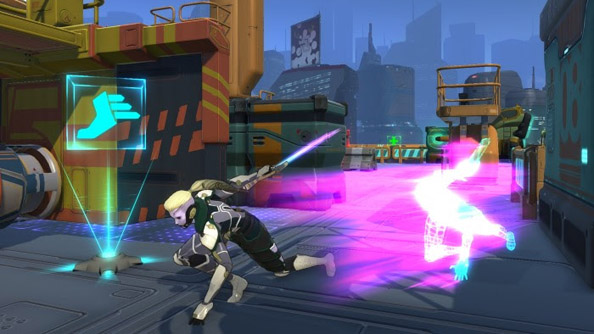 By contrast, we-go games like Frozen Cortex and the newly announced Atlas Reactor offer the bank holiday beach rushes of the genre. In Trion Worlds’ cartoon megacity, two teams plot idealised versions of their moves – and then madness ensues as their plans play out simultaneously.

“It’s a competitive turn-based game where it’s always your turn,” say the Rift and Trove studio.

This is a Trion game, so it’s designed to be played online. The developers are recruiting for an early alpha test that’s already begun.

In a future run by powerful Trusts, players become Freelancers looking for the last man-made reactor on Earth – and gosh, has the world of self-employment got brutal. Colourful (i.e. loud) characters will have a matter of seconds to outthink their opponents before watching another snippet of battle unfold. And then they’ll do it again, assuming they haven’t been blasted to bits in the interim.

“When the dust settles, you will either feel like the smartest player on the battlefield or know exactly where you went wrong,” writes exec producer Peter Ju. “Either way, you’ll want to play again.”

At this point, the dev team still have plenty of time to work in new ideas and armed individuals. They claim Atlas Reactor is a “new kind of game”, and while it isn’t entirely without contemporaries, it’s exciting to see another face in this sparse field. Any of you lot interested?