Wake up! It’s the future now. Don’t worry: eSports grew and grew in exactly the fashion you hoped it would, swallowing pop culture whole. But as synthetics began to seep into human society, contact sports took a turn for the weird – eschewing sentient players for remotely controlled robots who offered the satisfying crunch of metal-on-metal.

Coaches became all-seeing dictators, and you became one of them. If only you were all-knowing too. For Cortex is a game about glimpsing several possible futures and trying to do the impossible: cover for all of them.

In Cortex, two players control five robots each and navigate them around a pitch pockmarked with randomly generated obstacles. In each phase of play, one team attacks and the other defends, but their goal is the same – to pick up a luminous orange ball and guide it over the line at the opposite end of the field, while preventing their opponents from doing the same. 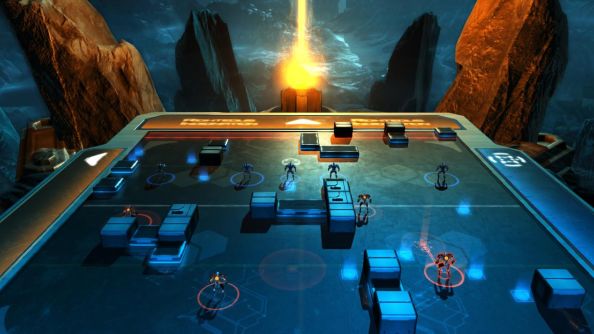 The ball can be hurled, and it can be carried, but not both in the same turn; it can be plucked from the air or wrestled from the hands of a robot to force a turnover. The most important bit of information you need to know, though, is that players don’t take turns in the traditional sense. They plan and lock in their moves, and then both watch from behind their fingers as everything plays out in real-time.

Cortex began as Frozen Endzone, and American football is in its DNA. But it’s also a further refinement of Mode 7’s last game, the simultaneous SWAT sim Frozen Synapse.

At some point in the last few years, Mode 7 must have taken Synapse apart and put it back together again – only to find they had parts left over. They’ve chucked the superfluous bits out, stripping an already minimalist series back to the frame. Cortex is a kind of skeletal strategy experience, with waypoints stretching like X-rayed femurs and tibias across the map. 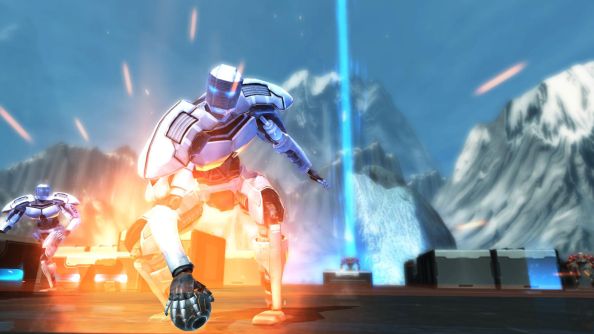 The guns are gone, and with them any consideration of line-of-sight or unit death. Instead, there’s blocking. As a rule, stationary robots on the field of Cortex will give anybody who enters their radius a thwacking. And if two are running for the same spot, you’d better hope yours arrives there first – because if they’re even a millisecond too late they can can expect a boot to the frontal lobe.

It’s no shotgun to the face, but it’s enough to put a bot out of the game for the next half a turn – and with play over in a matter of seconds, that’s a big deal.

And then there’s the ball, forcing players to redraw battle lines whenever it’s lobbed from one part of the field to another. Natural choke points and clearings emerge around those randomly-placed blocks, and winning becomes a matter of canny positioning and prediction. Like many of the best tactics games, Cortex is about managing risk – making good bets, knowing that you can’t account for every angle. 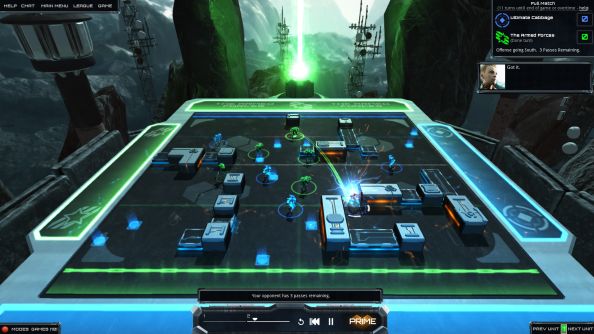 There are clear similarities to Blood Bowl, but I only bring it up to point out a fundamental difference. Where the games of Games Workshop tend to trust in the dice to create dynamic and surprising situations, Cortex is deterministic till death – play the same moves the same way, and you’ll only ever reach one result. You’ve nobody to thank, or blame, but yourself.

It’s partly this that makes it so bloody intimidating to start playing online. Every turn is a bit like being asked to make three or four penalty saves as you attempt to anticipate the movements of hardened early access players – and feel like an absolute chump when you dive the wrong way.

Despite a comprehensive tutorial, it’s easy in the beginning to get confused – particularly when swapping back and forth between a few games with different coloured teams. If two players are on top of one another, it’s hard to tell which is carrying the ball – and more than once, I’ve forgotten which end of the pitch I’m supposed to be heading for. 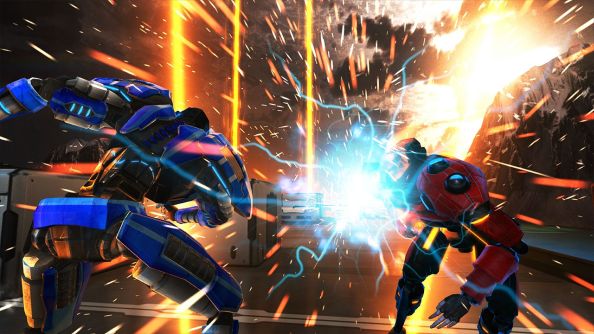 The camera helps: it defaults to isometric, but tips forward into bird’s-eye-view as you zoom in – offering greater clarity and invoking the analytical allure of televised sports. That allure extends to your androids, too: each has individual stats for blocking, running, throwing and the like, and you’ll benefit from scrutinising them.

While Mode 7 have some fun with confused metaphor at the expense of real-life commentators, it turns out the intense debate and number-crunching of the TV sports world is a perfect fit for small-scale tactics. Between single player matches, you’ll see a media page stuffed with the latest headlines, team overviews, and pending calls from other coaches – each of whom bear distinct (and in some cases despicable) personalities. 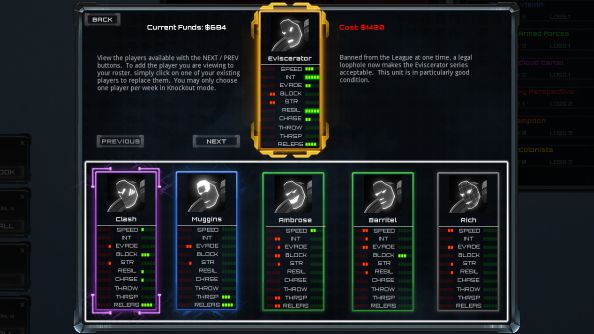 While Frozen Synapse told a straightforward tale of Silicon Valley dystopia, Cortex’s story is built from context-sensitive text-snippets, assembled a little like those blocks that make up the pitch. In matches, the spectre of endlessly-repeating FIFA voiceovers is banished with wonderfully specific observations from commentators and coaches. It’s genuinely crushing when, in the last few turns of a game, the shrewd but petty Professor Turek notes that his point total is simply too high to be topped.

Cortex was honed as a multiplayer game in early access, but now it’s reached 1.0 it’s a fully-featured single player game as well. The default mode is Knockout – a sort of permadeath league where a single loss means starting again. But there’s also a more forgiving season mode, where you can muddle through and buy better players at market as you go along. Funds are sourced from matches or the betting shop – and the game doesn’t preclude the possibility of throwing games (in fact, there’s a Steam achievement for it).

The story is shared between the two main campaign modes, and picks up more or less where you left off after a knockout. That means you won’t have the same conversation twice with another coach – and as you gradually learn the game, you’ll see a match-fixing scandal explode in the background. 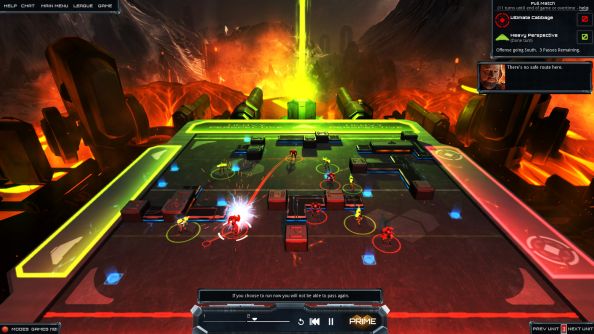 Cortex’s sporting world is recognisable as our own. Media corps, tech manufacturers and the military all have questionable interests in the game – while one team, set up via crowdfunding to bring the game back down to Earth, fields a forward named Chairman LMAO. It’s a future in which you imagine both Reddit and Goonswarm are still going strong.

The world alluded to in the sport’s peripheral is different, however. Mollycoddled humans in cramped habitats need Cortex to escape – and synthetic separatists are siphoning winnings offworld to build a colony (“Humanity,” says the Colonists’ wilfully uncommunicative coach Operator 703, “is the most self-important of lost causes”). Though society survives, all is not well with it.

To their great credit, Mode 7 resist colouring in the corners of their universe with codexes, and it’s all the more real for the ambiguity. 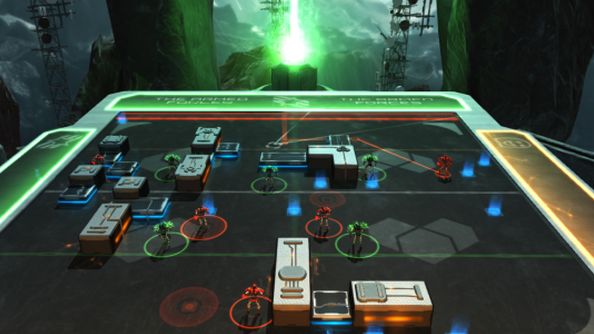 Characteristically, one of Cortex’s finest features is so subtle you’ll barely notice it’s there. While two players can begin and complete an online match in one sitting, the game copes ably with one or both coaches wandering off to another game or to go to bed. It’s possible, even ideal, to switch back and forth between several matches at once. And if you’re offline when an opponent’s turn is sealed and sent off, the game will email you a nudge.

The system’s a strong fit for the game’s fleeting matches, which can slip into even the busiest of weeks. Yup: Cortex can take its place next to Chaos Reborn in the play-by-email renaissance of turn-based tactics.

Frozen Cortex deserves a place in your inbox and your heart: while its stark simplicity might feel cold or even cruel at first, Mode 7 have in fact boiled the Synapse formula down to something perhaps more beautiful, burning away its impurities to leave hard diamond.