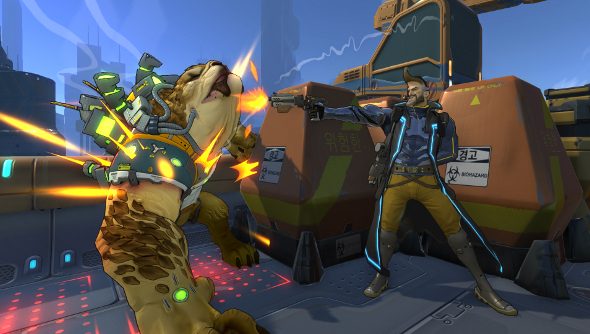 Atlas Reactor is a team-based tactics game where slick pistoleers can fight strange robot puppies and giant cat-men. It’s Trion Worlds’ first foray into the genre, and while it’s at first evocative of XCOM – albeit a very cartoony, colourful version – turns are taken simultaneously, bringing it closer, perhaps, to Frozen Synapse and Frozen Cortex.

And while it’s in alpha at the moment, it already shows a lot of promise.

To give me an idea of how Atlas Reactor works, executive producer Peter Ju and senior game designer Will Cook talked me through a 2v2 match driven by senior game producer James Karras. For his team of ‘freelancers’, he picked Lockwood, the aforementioned slick pistoleer, and Asana, a tanky, nano-sword wielding bad ass. The latter was controlled by a bot. 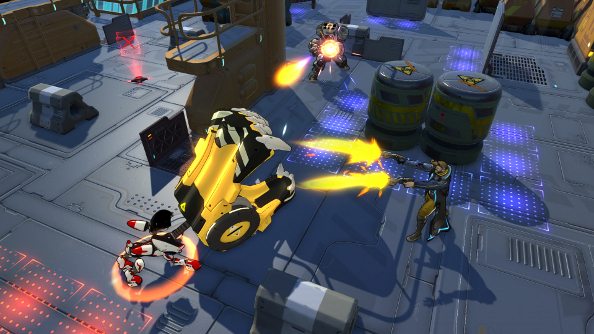 The arena, a small construction site suspended above a futuristic city, was littered with cover and nodes containing power-ups that buff health and damage. Being a ranged fighter, Lockwood was at his best when ducking behind these bits of cover, but these walls provided more than defense. See, Lockwood’s a fancy fellow. He doesn’t just point and shoot. His trickshot ability means that his bullets can ricochet off walls, so a direct line of sight isn’t needed.

With everyone taking their turns at the same time, Atlas Reactor isn’t about reacting to the enemy’s move, but rather acting based on what you think they are going to do. Ju describes it as “rock, paper, scissors,” but I think that’s selling it a bit short. It pays to know the enemy, recognising what abilities they’ve used – and are thus on cooldown – and what makes the most sense for them to do now.

Each turn is made up out of multiple phases. Things kick off with the prep phase, where players activate shields, apply buffs and set traps to catch enemies during the dash phase, the phase in which they can break the rule that movement comes after attacks. Finally there’s the blast phase, where all the lovely damage and explosions happen.

Teams can work together to fight the ambiguity of the simultaneous turns, however. Karras’ opening move, for example, was assisted by his bot-controlled ally. He could see what she was going to do (teams share information), so he knew that she was going to root the nearest enemy, making it easier for him to align his trickshot.

As Ju and Cook explained what was happening during each turn, it became clear that a lot of thinking goes into every single move. For instance, Lockwood found himself smack bang in the middle of a large delayed attack, because he didn’t move in the previous turn and stuck to his cover. Delayed attacks like sticky bombs or missiles ignore cover, so he was in a tough spot. He did have a dash move, however, so Karras would be able to make Lockwood avoid that damage. The question then was where does he move to?

A power-up was nearby, making a tempting target, but that would leave Lockwood outside of cover and potentially in melee range of an enemy. “If you’re burning your one escape,” explains Cook, “you don’t really want to end up in front of enemies as a result.” 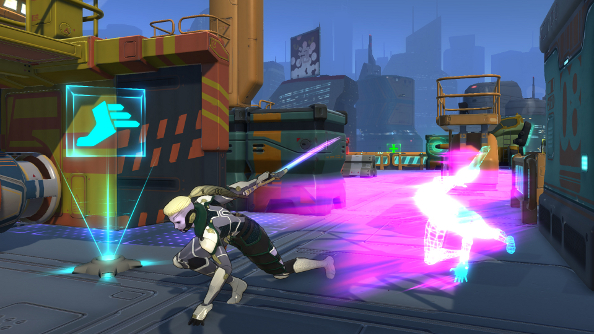 That brings up an important point about manipulating enemies. Obviously when you attack, you want that attack to hit, especially because health depletes very quickly. But a delayed attack, which everyone can see is about to happen, can force the opposition’s hand, making them burn an ability to get out of the blast radius. Thanks to the cooldowns, that means you’ll know that, when the next turn starts, that enemy won’t be able to use that dash ability.

Karras played conservatively, moving Lockwood back, behind more cover, avoiding the explosion without ending up in melee range. He didn’t get the power-up, but he started the next turn in a safe position.

All these decisions have to be made quickly, too. Turns are on a timer – which, along with many elements of a match, can be determined by players if they choose to make a custom game – so there’s not a lot of time for second guessing. The timer was paused for the purposes of the demo, but can be set to five seconds, if you want, for blisteringly fast turns. 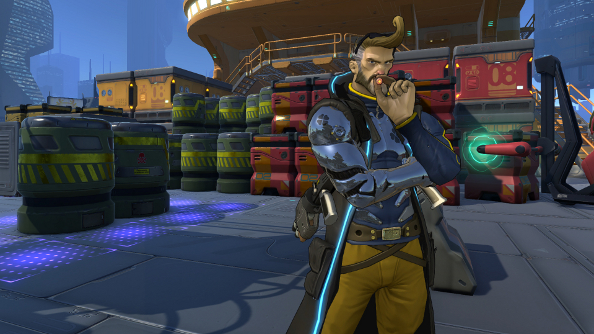 Atlas Reactor takes a novel approach to death. Not only can the freelancers get a number of lives, meaning that they can respawn a turn later, they also get a Hail Mary before they pop their clogs. It’s a bit like Borderlands’ Second Wind mechanic. So, losing every bit of HP doesn’t immediately kill a character, instead putting them in a critical condition. While critical, they can still get off one more attack before they die, and that attack might even save their life. Pup, the robotic hound, can regenerate a bit of health when he attacks, for instance, keeping him in the game for a little while longer.

“It’s a very important part of the gameplay,” says Cook, “that we didn’t want anyone to feel like they’re done when they’re down to one hit point because they can’t go toe-to-toe with somebody.” If a freelancer is still breathing, then they are just as deadly as their full-health counterparts.

Employing shields can also help when you’re down to your last hit point, or you might want to dive into the brush. Atlas Reactor’s brush functions a lot like it does in a MOBA, allowing you to hide from enemies and set up devious ambushes. The twist is that once you fire from the brush, it disintegrates, and can’t be used for a little while.

The demo ended with Karras in the lead, but in a tricky situation. Pup had been knocked out of the game a turn before, but had just respawned out of Karras’ field of view, allowing the robotic dog to ambush the already battered opposition. It was surprising to see that freelancers respawn with a momentary but distinct advantage, which no doubt softens the blow of death a wee bit. 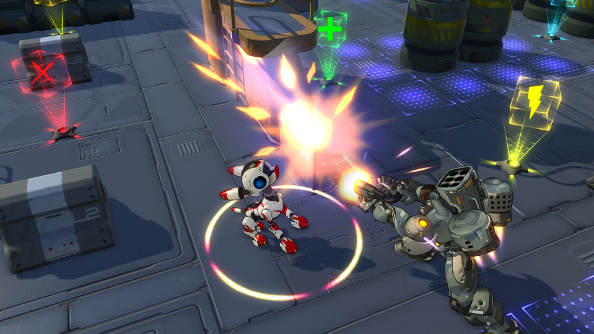 Although it’s early days for Atlas Reactor, it’s already proving to be an entertaining game, even just from my perspective as a spectator. Abilities are flashy, and each freelancer has taunts that zooms the camera in, letting them do a bit of showboating before they fire off an ability. It’s appropriate, then, that the game will feature a spectator mode, which is just one aspect that Trion hopes will lend itself to competitive e-sports tournaments. It’s worth noting, however, that Trion’s not going to force the game down the e-sport route.

“We really feel like you can’t just make an e-sports game,” tells Karras. “It’s something that you need people to be passionate about, and it has to grow organically. Obviously we’ll be supporting ranked mode and that kind of thing, and spectator mode, but what we’ve tried to do is make the game in a way that we call ‘e-sports compatible’… and if e-sports grows out of that, fantastic.”

Closed alpha will be kicking off imminently, and you can already sign up here if it tickles your fancy. The plan is for Atlas Reactor to be free-to-play, supported by cosmetic items that can be purchased with real cash, though lots of these things will also be available for unlock just by playing the game itself.