A star is dying. In the ever more intense red light of this collapsing giant, eight blocky exoforms scrap for victory, cube and claw, darting in and out of the nooks and crannies of an intricate arena. The laws of physics are breaking down around them. Collecting mass for glory is all that matters now.

This is the final ten minutes of the universe, replayed endlessly for the entertainment of sentient, atomic lifeforms. One final grab at a sustained existence in a time that fails to recognise its worth. It’s a poignant image, laced with the surreal, otherworldly emptiness of impending universal desola… HA HA! TAKE THAT YOU STUPID FLIPPING RAPTOR EEJIT! NOT SUCH A CLEVER GIRL NOW, ARE YOU? WHO’S NEXT? COME AT ME!

Want to know how to score big? Read our Atomega tips guide.

Sorry, just got another kill. I shot out the energy bridge from under what I thinkis another UK game journalist masquerading as a raptor made from cubes. I’m a big cycloptic ape, pounding about on my knuckles. It would seem that, irrespective of the game’s evocative setting, Atomega – the latest project from the team behind Grow Home at Newcastle-based studio Reflections – is remarkably silly. It’s all the better for it, too.

Along with the Saur and guerrilla – called Prime – other playable exoforms include a bipedal giant named Superior, whose shadow looks suspiciously like that of perennial PlayStation disappointment Knack; and the crustacean-esque Zoa, which zips about the place like an irritating, laser-imbued gnat. The goal of each ten-minute match is to gather as much mass as possible in order to score the most points and evolve up through the various forms – kills don’t matter outside of their role in defending your position, and scooping up the tasty, tasty mass of fallen foes. Oh, and providing a catalyst for excellent, Jurassic Park-inspired smack talk, of course. 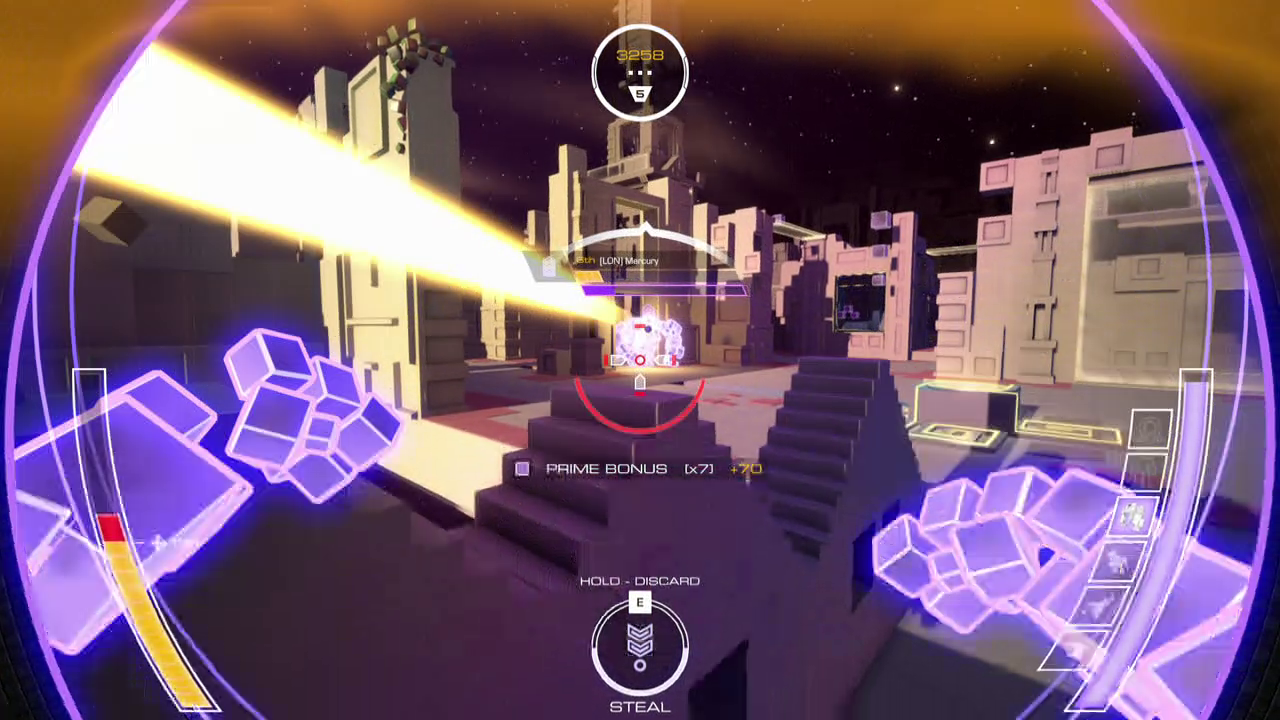 Mass is represented by variously-sized cubes, which sit on jump pads, in tunnels, and spill from mass generators that are dotted around the game’s single – but enormous – map. You’ll quickly establish favourite routes around the place, adding a dash of driving game flavour to proceedings as you finesse your lines in order to bulk up quickly. With each exoform evolution, however, you become more lumbering, and your laser – while considerably more powerful – less rapid. Your increasing stature also makes you an easier target, of course, and the complex network of tunnels, doorways, and rooms that form the map are gradually closed off to you as your inflating backend precludes formerly spacious hiding places.

It’s an extremely smart mechanic which sets up some amusing situations. On one occasion, as the Zoa form, I use a tunnel entrance as cover while taking pot shots at a drastically more powerful Superior. By zipping in and out of my hole, I manage to land a few hits unscathed, and unnoticed, but then I accidentally pick up some nearby mass as I strafe out a bead too far. I immediately evolve into the Saur form and can’t fit back into my hiding place. Of course, thatis the moment I am spotted. I’m cut down like a dinosaur-shaped dog as I desperately scramble for new cover. 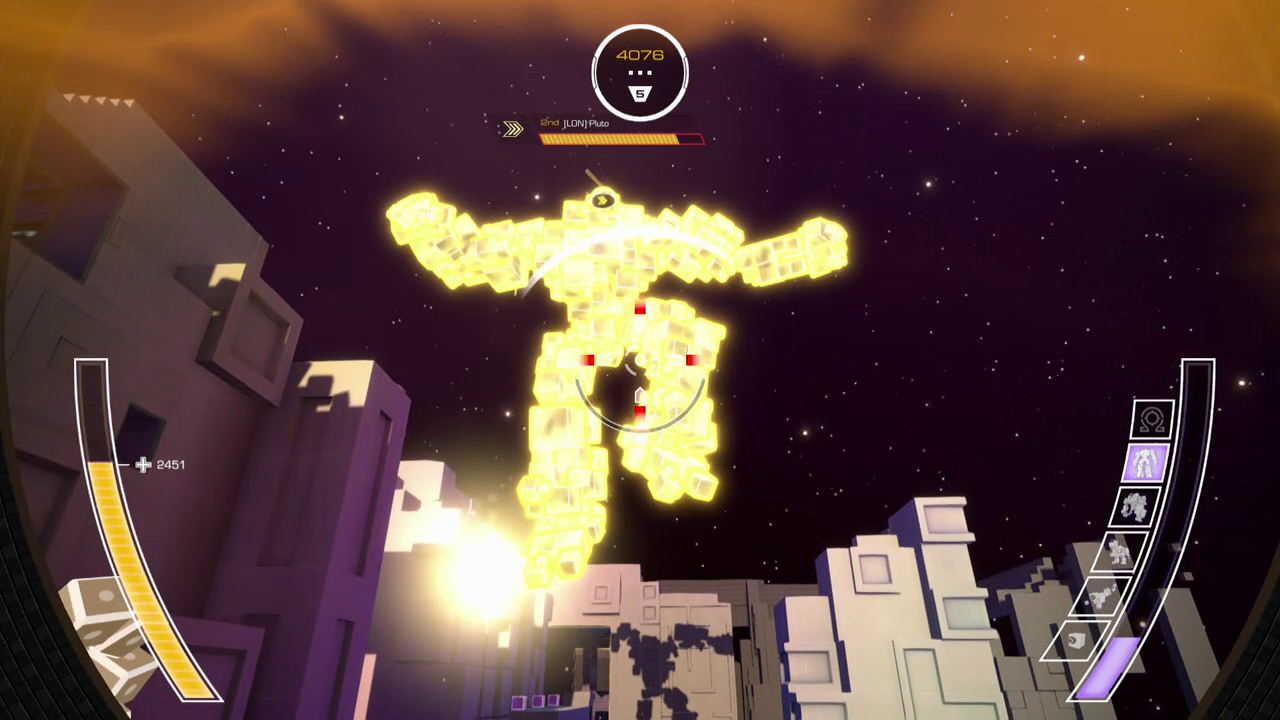 Conversely, when playing as larger forms, you will regularly find yourself taking ineffectual but irritating fire from some direction, then discover that the culprit has disappeared into one of the structures when you whip around to deal with them. The bully becomes the bullied.

Smart players will make use of the teleport ability, available to every form, which allows you to escape from firefights that don’t seem to be going in your favour. You’ll still lose a little mass – either a gory prize for the opponent with whom you played health-bar chicken, or a leg up for any opportunistic scavengers passing through – but you’ll only drop down one exoform level. If you’re killed, you must start from the atomic form, so – like an enthusiastic gym user reluctantly accepting the benefit of rest days – strategic retreats are an essential part of maintaining your growth.

There are a variety of power-ups, called hacks, that will give you an edge in a fight and minimise your weight loss. Self-explanatory upgrades like Shield and Damage have the expected results, but there are also temporary boosts such as Steal, which allows you to leach mass from targeted opponents; Impact, which knocks exoforms back (especially useful on bridges); and Grow, which makes every morsel of mass count for more calories. 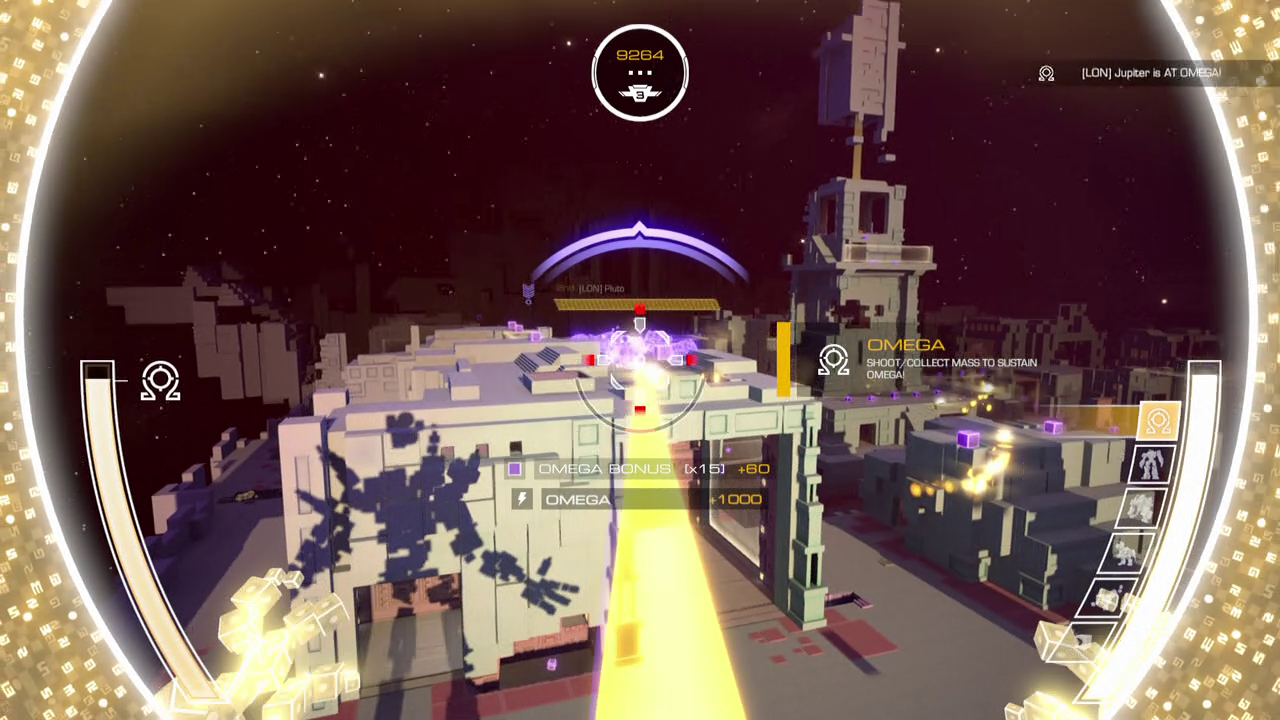 Stick with the bulking programme (no, I’m not fully on board with, or in control of, these analogies either), and you have a shot at reaching Omega form. This ultimate evolution bestows god-like power on players, allowing them to suck in any mass they target and cut down opponents with a devastating beam weapon. Rather than health, you’re on a timer which you can add seconds to by greedily consuming mass. Other players will take it from you with every shot they land, however, so holding on to the form becomes an almighty tussle as every reticle is suddenly pointed your way.

What appears to be a rather complex premise on paper distills down into a pleasantly intuitive shooter within minutes of starting a match. Shorn of the usual genre clutter, Atomega spins up to speed quickly, and the short, pacy power struggles that constitute each round are laced with enough strategic nuance to keep things interesting despite the single map and mode. The game’s mechanical simplicity could equally end up being its undoing in time, of course, and it’s difficult to know if Atomega’s slick, reductive design can sustain interest indefinitely. But my time spent blasting exoforms into pieces has, thus far, proven to be a massive amount of fun.