Lending new meaning to the term ‘massively multiplayer online first-person shooter’, Atomega is the surprise new announcement from Grow Home studio Reflections. In it, you must rush around the game’s giant map gathering cubes of mass in order to become larger and more powerful – get cut down by another player, however, and you’ll have to start your bulking session from scratch.

Read our full review of the game here.

It’s a curious concept that’s considerably easier to pick up than it is to explain (don’t worry, we’ll still have a go when we publish our review of the game next Tuesday). With that in mind, we sat down with four of the developers – department producer Pete Young, Atomega producer Rich Alexander, gameplay programmer Matt Lacey, and UX designer Lewis Chisolm – behind Atomega to try and shed some light on this esoteric new online shooter.

Where did the initial concept for Atomega come from?

Rich Alexander: The idea was to do something different. There was a prototyping stage where we tried lots of different concepts – we thought about what we could do with parallel universes, and with the idea of ‘one is many’. Atomega came out of thinking about ‘big and small’. The DNA of that prototype is still there in the game today. It just caught our attention and imagination. How does that work? What happens when you become the bully? How does it feel as you work your way up [the pecking order]?

There’s just one map and one mode in the game. That seems risky.

RA: It was a conscious decision for us – we’ve been focused on making the experience as strong as it possibly can be. The map is huge because it caters for things that are tiny, and then a hundred times the size, and everything in between. So it’s about getting in all the detail. I still find holes and tunnels that I never knew about, and I’ll turn to Matt and ask, “Has that always been there?” 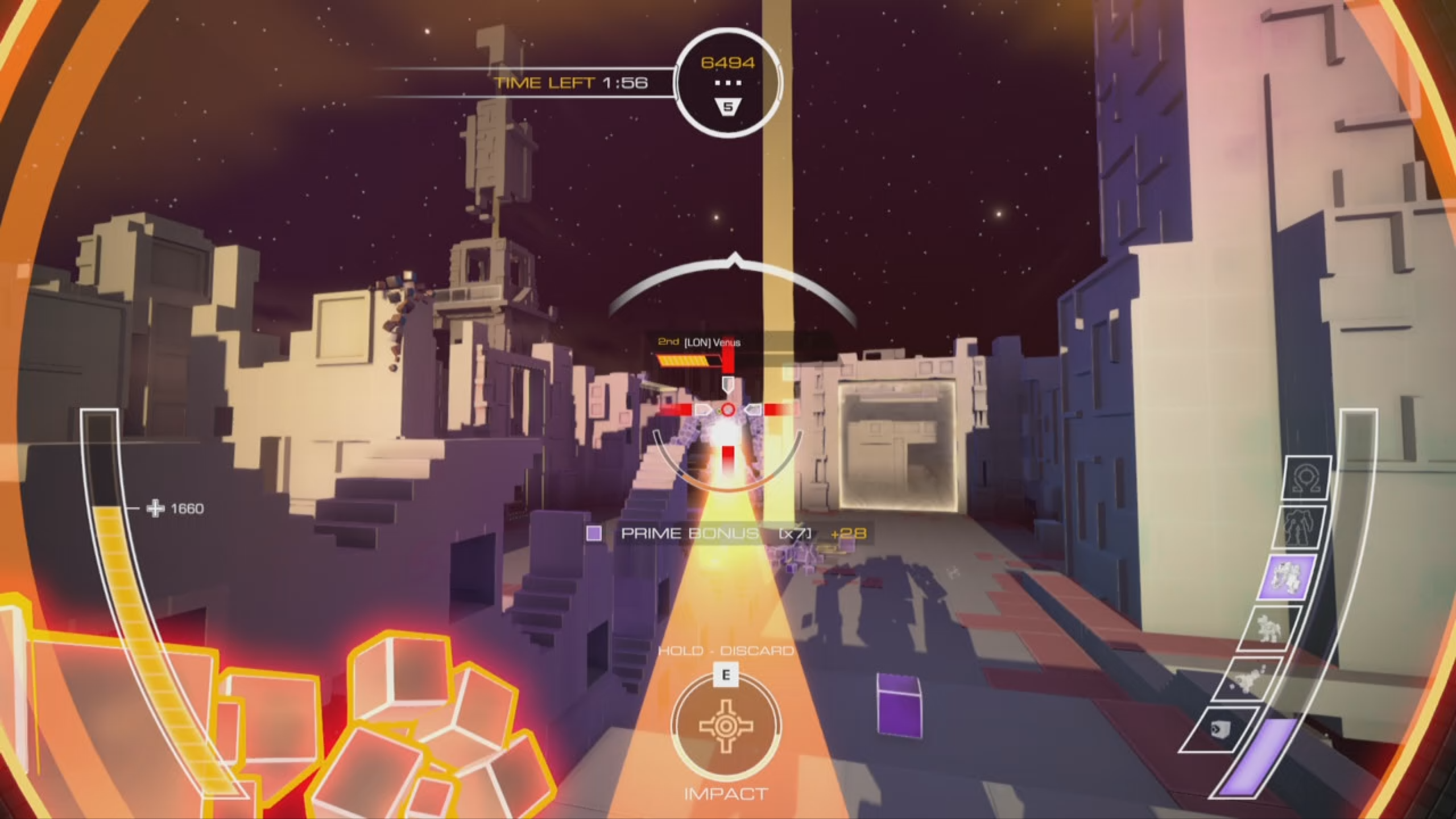 Given the single map, and per-round character evolution, have MOBA’s been an inspiration?

Pete Young: We’ve got a load of FPS fans in the team – there are people who love Overwatch, and there are people like me – I’m an old-school QuakeWorld fan. So I think it’s the FPS genre that has a stronger influence. It’s more about us wanting to make a unique and different experience within that genre.

RA: We’ve always wanted to do something different, and that’s unusual. Often, a lot of our decisions were based on following what felt like the most natural progression of ideas. So, in the morning we would playtest and say, “Wouldn’t it be interesting if we did X, Y, and Z?” And then the team would turn that around, and by the end of the day we’d be playing a version of that. We’re all gamers, and we’re all inspired by what we play, but it’s really been about trying to figure out what we could do that feels different, but that is still accessible. That’s been one of the bigger challenges that we’ve faced – can you pick up and play it?

Do you plan to add more maps in the future?

RA: Once we get this out there, we just want to hear what the community say. What are they asking for? What are their needs and demands? We’ll definitely be looking at bug fixing and balancing initially, just to make sure that the experience is as strong as it possibly can be. From there, whatever we do we’ll develop it in the same spirit that we’ve developed the game.

PY:We’ve got some ideas, but let’s see how the game is received first. 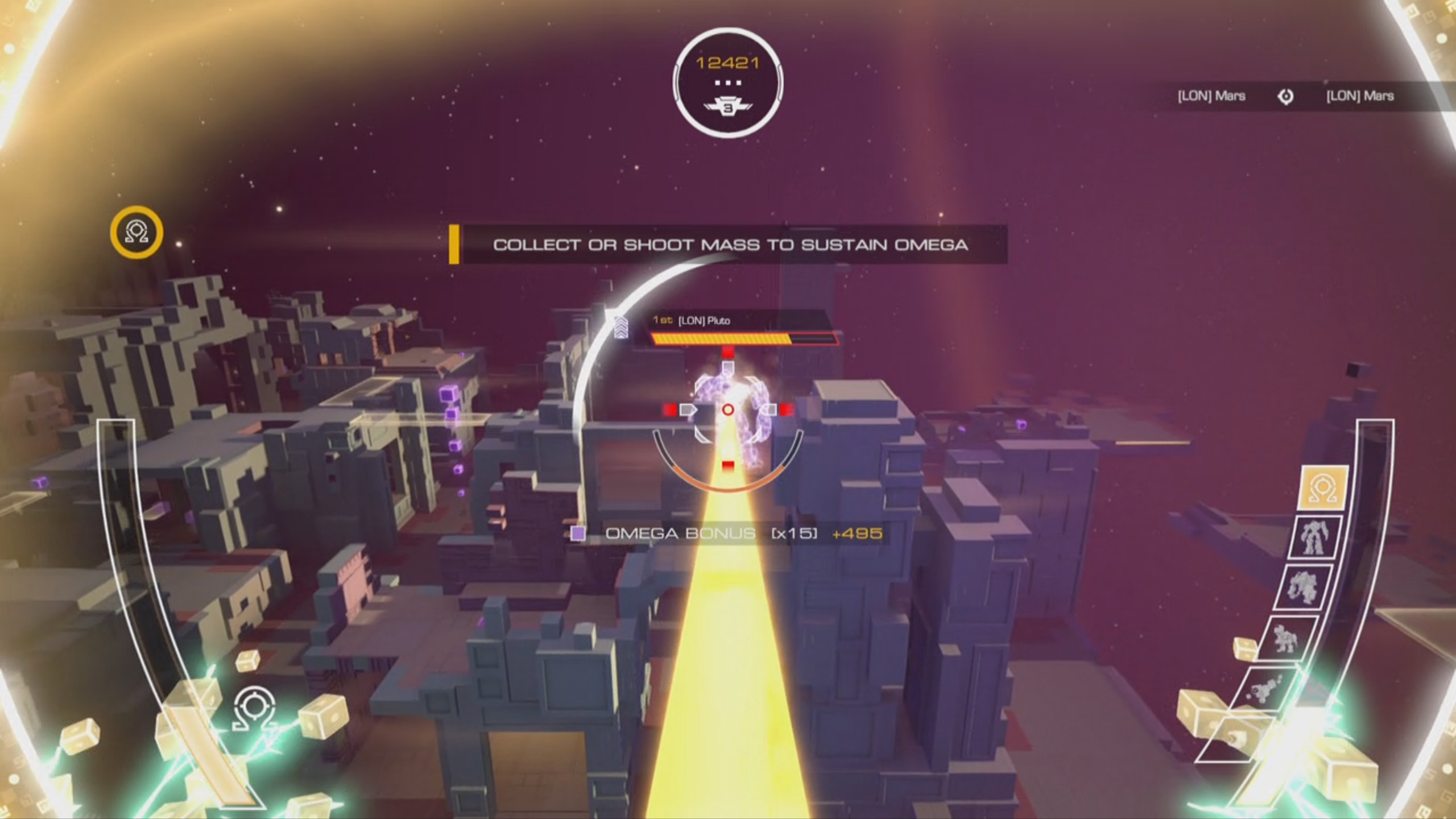 Has balancing the power of the various player forms proven difficult?

PY: There were two things that excited us right at the start. Number one: how do you make a level that caters for super-tiny characters and super-massive characters, while still being fun and fair, and letting the player feel like they have options at all sizes? Number two was balancing: how do you balance those extremes and make it feel like it you’re still a contender no matter what size you are?

RA: It has been really challenging. Luckily, we have people like Matt on hand. A lot of the playtesting we’ve done internally has helped us identify situations where a player might be overpowered. But also we wanted to make sure that you can play in different ways; if you get to the second biggest form, say, can you just stay there? Is that a way to win? For example, I’m quite passive in the way that I play – I don’t shoot unless shot at, really, and I prefer to just collect mass and build up that way. But there are some people, like Lewis, who are very aggressive and into shooting and taking other players down. Their path to winning is building up and being the biggest. It’s been an interesting challenge to do that.

Have you had any disasters along the way?

ML: There have been plenty of playtests where we’ve completely broken the balance, and had everyone going, “Oh no, what have we done?”

Lewis Chisolm: There’s also the challenge of relaying all these game mechanics and systems to the user via the UI, and trying to anticipate what they will think about a certain thing when they see it. You’re trying to communicate all this information in the smallest amount of time possible, using the smallest amount of information. I think a lot of triple-A games really suffer from a lot of on-screen clutter. It takes a long time for all this information to really sink in, and you don’t get fully immersed in the experience. We looked back at games over the past 20 to 25 years – seeing the purity of early shooters has really helped inform Atomega’s interface. 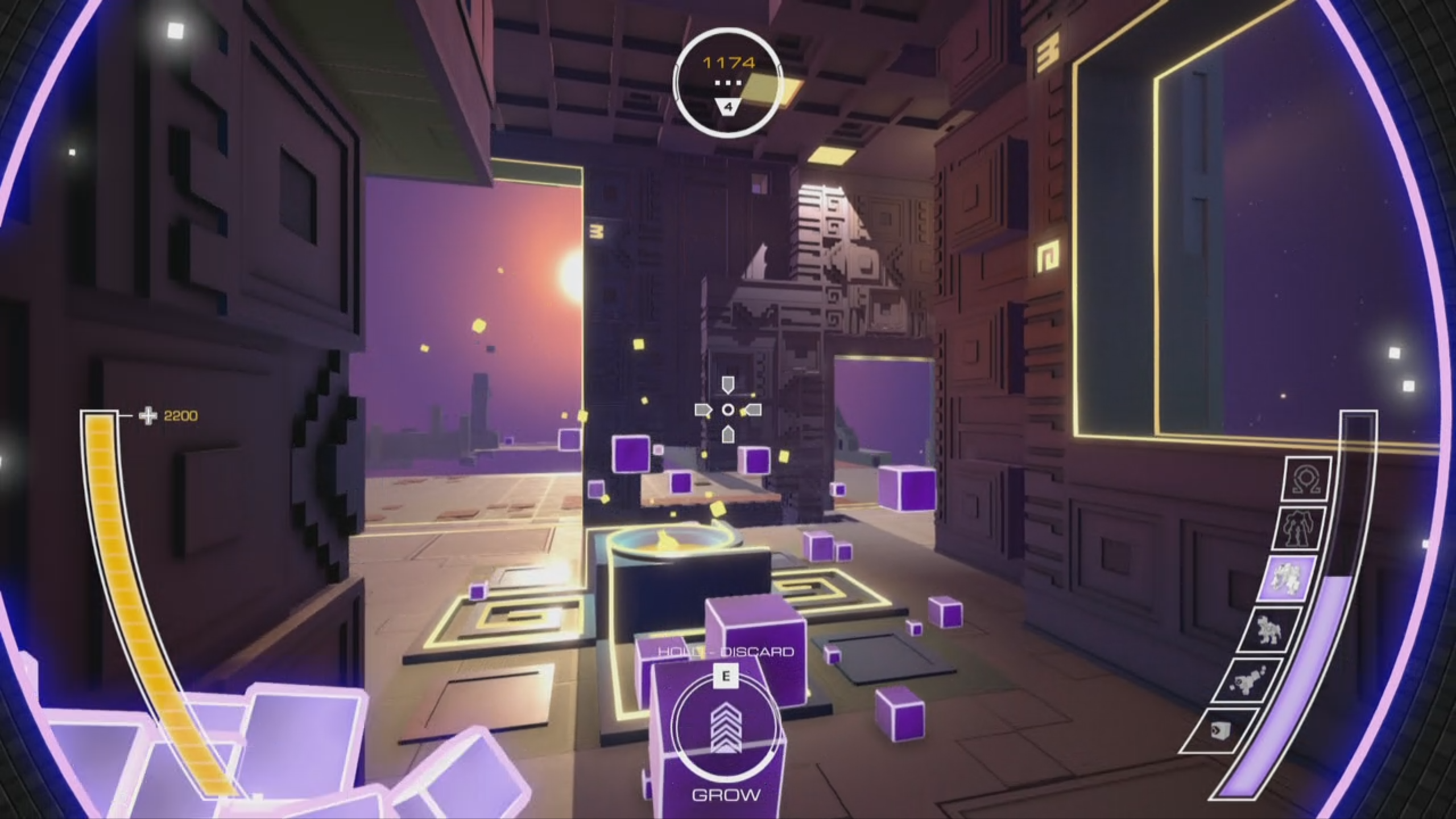 Another element of classic games is power ups, of course. Atomega’s feel great – were they easy to decide upon?

ML: We settled on those pretty quickly.

RA: We knew that was an important part of the game – to create that variety, and those memorable moments. So if you have a Saur fighting a Superior, how can we make that different each time? For example, with a shield power up you can wait until you’re nearly dead before triggering it, and your opponent goes, ‘Oh no! I can’t believe you did that…’ When those moments happened in the office we realised that we were onto something.

We realised that some power ups were too strong or weak, so we separated them or bundled them up together. And we wanted to tie them in with the environment, too. So if you’ve got high impact, for example, maybe you hang around the bridge area and shoot a big guy off the side. One of the challenges with the power ups has been to make it feel like you’ve got the right thing at the right time, but never overpowered.

PY: There are all these subtleties that you might not notice at first, too – magnet sucks boxes in closer, but you can also shoot boxes in distance and pull them towards you. There are a few of those little things that players who’ve put a few hours into the game will still be discovering. 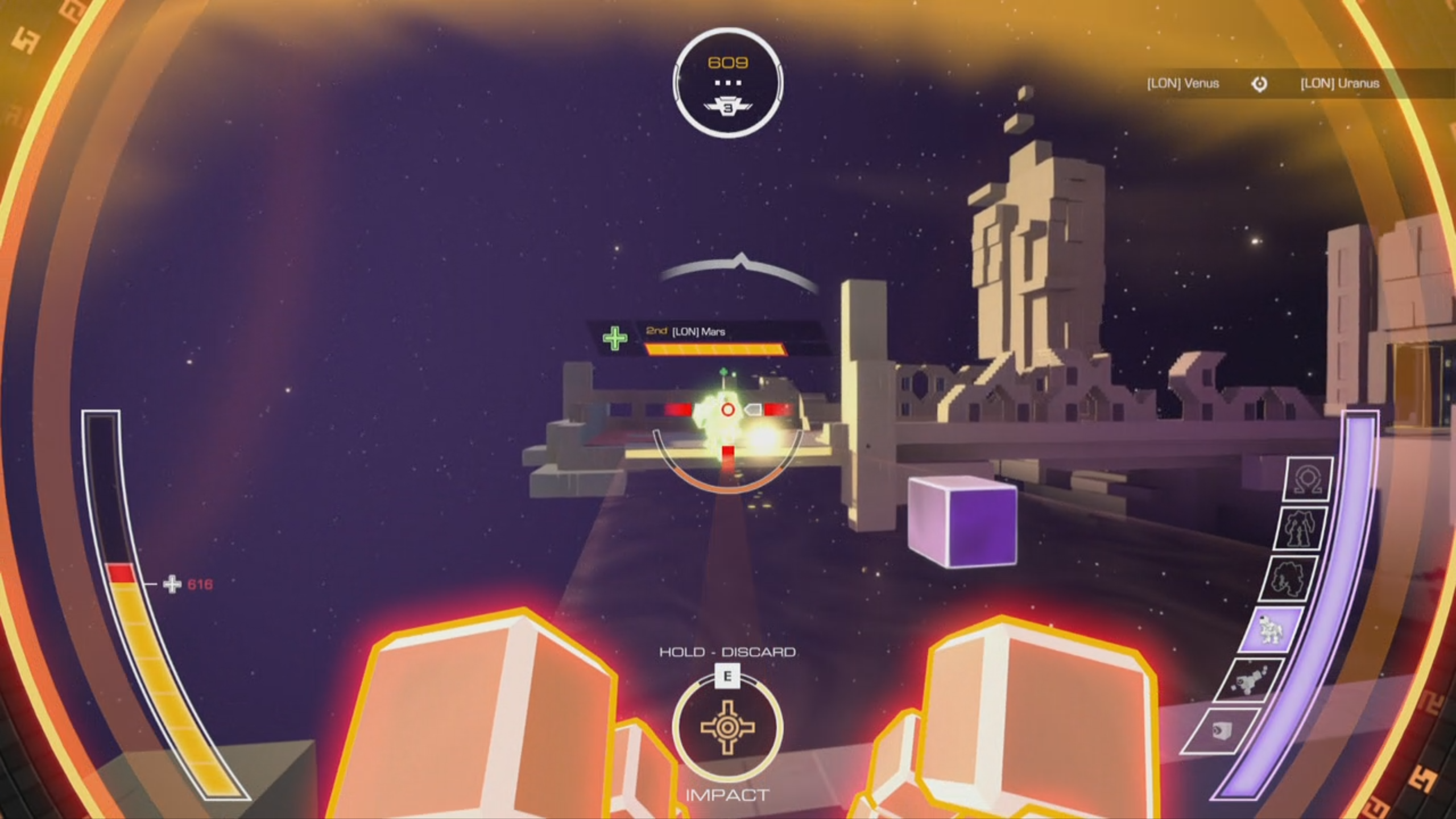 The game feels slick to play, but presumably ensuring that all of the different sized player forms worked on the same map was something of a headache?

ML: [Laughs] Yes. We used to just keep you at one box below your next evolution when indoors, so you’d have to go out and find your last box to grow. It was pretty late on that we got that solved and let you find all your boxes whenever, and then grow [as soon as you left a smaller area].

LC: It was pretty hilarious when you would grow and get stuck…

ML: Yeah, and we had a point where you got stuck between the trees, too, so a QC tester had to go and test every possible combination of trees. It’s definitely been a challenge to achieve this, but it all comes back to the same thing, which is changing sizes on the fly, quickly. One of the things we really wanted to nail quite early on in development was the speed with which you go through the different stages. We didn’t want players to feel completely frustrated when, after reaching a really high level and having it all taken away from them, they had to start again. To feel, ‘Oh, what a slog I’ve got now to get back to the top’. We want it to feel like, ‘OK, I’ve got the right power up, maybe I come across a mass fountain and there’s a lot of boxes there, or maybe two giants both lose at the same time, and I can quickly get back to where I was. That feeling of, ‘Ok, it didn’t go well for me there, but I can get right back into the fight’. That’s partly why we added the ability to teleport away [and not lose everything].

PY: We did have a time before teleporting was added, and it was brutal – you spent all that time getting bigger and bigger, and then it was allgone. 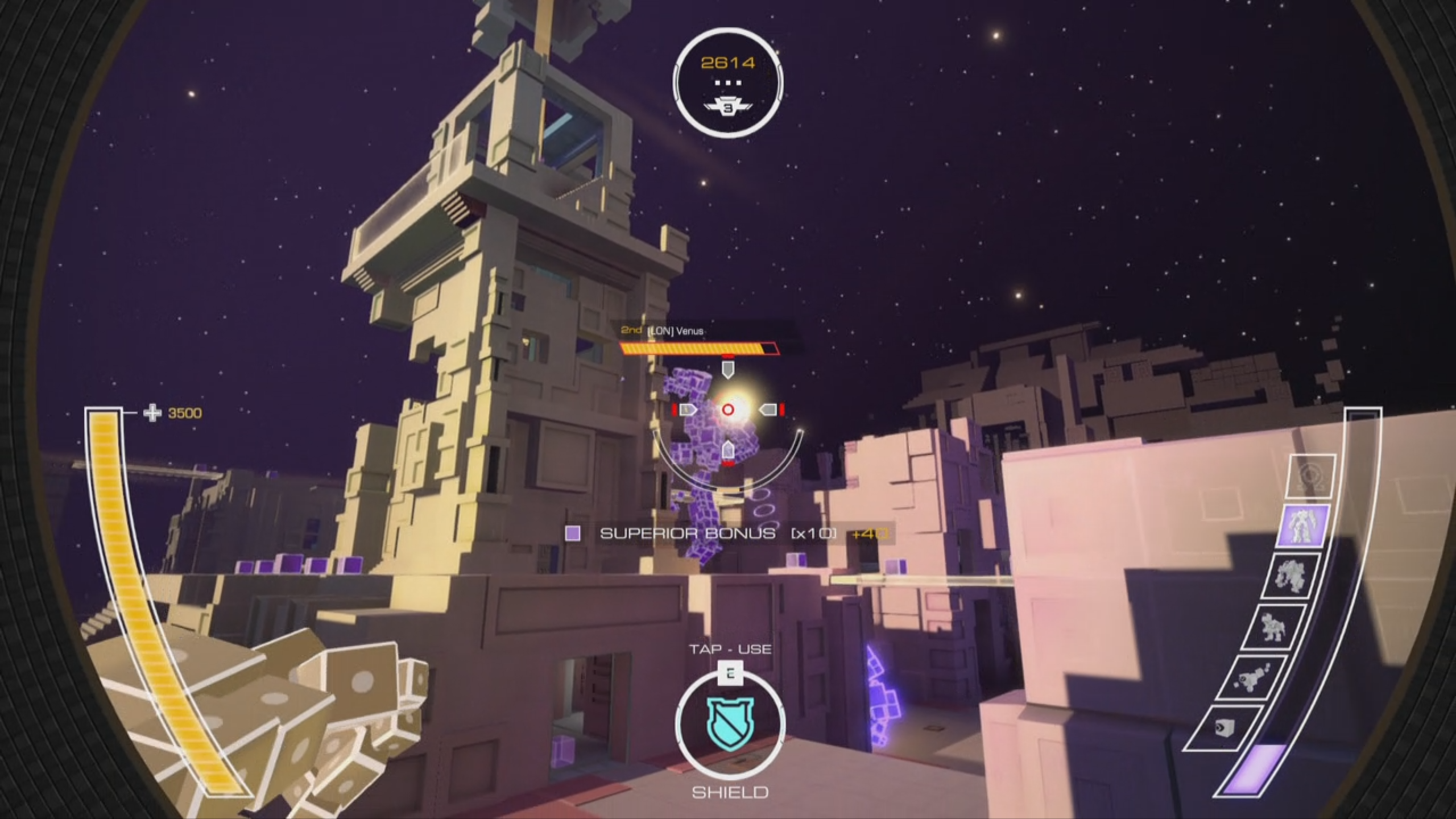 On that point, did achieving the transition between the various player camera positions throw up any hurdles?

ML: You’re right… Some of our models aren’t humanoid shapes – we’ve got weird raptors that are lengthy – so, yeah, it was tricky to get around the clipping issues, and cameras in walls and stuff. But I think we managed it!

Who do you think this game is for?

RA: We think it’s for fans of shooter games. If you’ve played the genre and you’re a fan, and you’re looking for a different approach, Atomega will hopefully scratch that itch for you. But it’s also for people who maybe don’t have a huge amount of time in their lives to play games – on a personal level, I’ve got a son, and I don’t have as much time as I used to to play games. When I do, I want to drop straight into the action. So we wanted to build something for someone who has 30 minutes but who wants to actually playfor those 30 minutes. And we hope that maybe this will be a gateway for people who aren’t as familiar with the genre, as it strips away a lot of the complexities, but still has the depth there to offer a solid experience.

Our review of the game will be published next Tuesday.