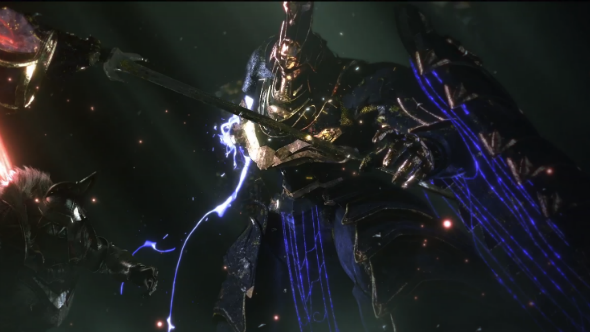 Square Enix announced today a new game in collaboration with PlatinumGames called Babylon’s Fall. The brief trailer doesn’t show us much aside from a fantasy setting with some significant history in its backstory. The game is set to launch in 2019 for PlayStation 4 and Steam.

The trailer begins with a location called the Helos Empire in CE 5000, with an event known as the “discovery of the Oversoul.” This sets into motion a chain events over the next 100 years that get downright apocalyptic, leading to the terrifyingly named Soul Riots, then leading into a world war. An increasingly complicated array of bad stuff happens until we reach CE 5475, with an “awakening.”

For all the newest titles on the horizon, be sure to check out our list of upcoming PC games.

Here’s where the Nomads are born, and it appears that this is the starting point for Babylon’s Fall. We see an armoured human-like figure firing out magic tendrils at something much larger, which appears to be an animated suit of armour. (The face looks a bit like a divine design from Bayonetta, for whatever it’s worth.) Those tendrils grab a sword out of the armour’s hand and swing it back at the construct.

You can check out a trailer below:

It’s all CG, so there’s little gameplay detail to glean outside of some magical attacks and a likely focus on combat – natural for a Platinum Games title – but with the game set to launch next year we’ll hopefully see more soon.