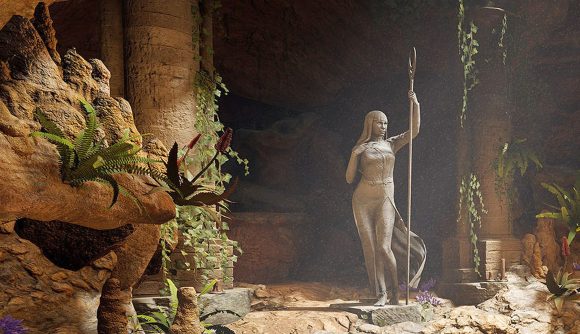 With Baldur’s Gate 3 still in Steam Early Access, the hefty patches brimming with content just keep on coming. Larian Studios has announced that the Dungeons & Dragons PC game’s sixth major update is on the way soon, and is its “biggest ever patch”, bringing a “new playable class”, “equippable salami”, and more.

Larian has announced the news in a Steam blog post, teasing that those who attend London’s EGX gaming show this week will get an exclusive preview of this new playable class. For those who won’t be at the show, it’s sadly just that teaser for now, with no details on what this new class might be in the post itself, though fans are already getting their guesses in early.

Several in the post’s comments reckon this new class could be the sorcerer – one that features in the D&D source material and is expected to hit Baldur’s Gate 3 at some point, but isn’t playable just yet. This is purely speculation for now, but it sounds like we won’t have to wait too long to find out. Larian reveals that it’s got another Panel From Hell stream “right around the corner that’ll serve as a deep dive into the new content for Patch 6”.

Elsewhere in Patch 6, there’s another, very exciting new weapon on the way: an equippable salami. “Yes, they can be dual wielded,” Larian assures us. Oh, thank goodness.

Beyond these teases, the studio reveals little about the upcoming patch in the post, but we do have an idea of its heft. It’ll weigh in at “approximately 60GB” the studio explains, so you’ll need to make sure you have, well, that much space on your PC before downloading it. The dev also reminds players that, as is the case with the game’s Early Access build, “any saves made Patch 5 or prior will no longer be compatible when updated”.

For full details on how to get yourself set up with the new patch when it drops soon, or carry on with your current save by using branching, head to the Steam blog, where there’s a handy rundown.