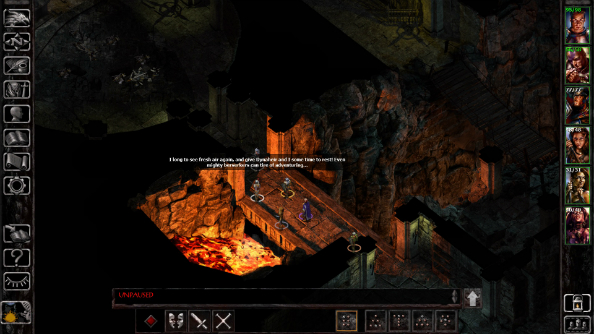 Beamdog’s extended campaign expansion for Baldur’s Gate: Enhanced Edition, Siege of Dragonspear, now has a release window, and gosh it’s quite soon. Studio boss Trent Oster revealed that it’ll be out in “early 2016” (I’m interpreting that as Q1) in a recent interview with Dragon+.

Need you even ask if Baldur’s Gate features in our best PC RPGs? Of course not, but click on it anyway, whydoncha.

Jeremy recently caught up with Oster and discovered that Beamdog’s story expansion is a vast one, some 25 hours in length. Progress in Siege of Dragonspear will follow directly onto the studio’s other great restoration project Baldur’s Gate II: Enhanced Edition – so that’s around 100 hours of role-playing without having to take a breather.

It’s another tradtional Sword Coast adventure, with returning characters (Minsc! Shout at me like it’s 1998, old friend) and familiar combat, this time set against a new “enigmatic foe.”

The expansion started life as a small-scale bit of DLC, but as the Beamdog devs focussed more attention on BGII:EE and put it on the backburner, their ideas and ambitions grew. When they returned to it, Siege of Dragonspear became a fully-fledged adventure in its own right, and a chance for the studio to add some real authorship to the franchise it’s so lovingly restored for modern machines and tastes.

If you fancy yourself something of a seasoned pro at the old Infinity Engine RPG combat by now (let’s face it, you’ve had plenty of time to practice) there’s a new difficulty setting called Legacy of Bhaal. It offers “tactical challenges only the most skilled of players can hope to defeat,” say Beamdog on the game’s official site.