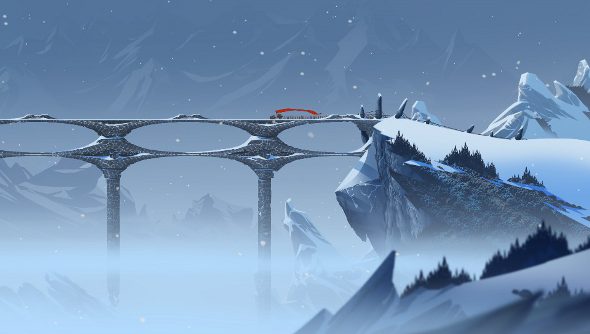 The sun is fixed in the sky, frozen; the gods are dead, remembered in song and in huge statues, but unable to save their world; and an ocean of stone and steel monsters flood the lands of human and varl – large horned giants – leaving nothing but death in their wake. The Banner Saga, Stoic’s Kickstarted tactical RPG, is a sorrowful tale filled with stark, snow-clad beauty.

It’s epic in scope, with a world facing absolute destruction and the journey of two caravans – eventually joined – leaving a vast trail of blood behind them, both of friend and foe. But it’s equally as concerned with the micro: management of supplies that make the difference between life or death, the juggling of relationships where few characters trust each other and the fate of the compelling cast of warriors.

It’s like a game of chess, but where emotion and instinct come into play as often as tactics and strategy, and my emotions have led to countless mistakes and my instincts have left me betrayed. 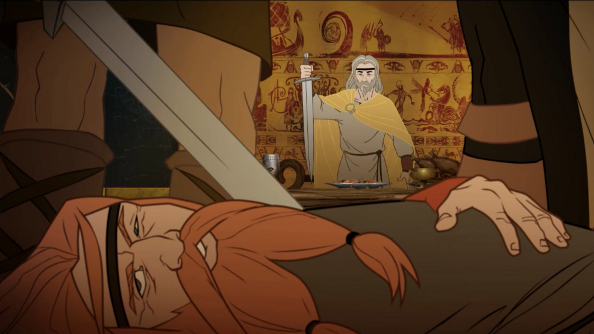 The Banner Saga is a story of journeys from one snow-dappled town to another, as caravans of refugees and gruff warriors attempt to escape a vicious tide of monstrous, uncaring enemies known as the Dredge. The world is ending, and as the plight of human and varl alike becomes all the more grim, the game becomes a desperate struggle for survival against the odds.

It starts as several stories, intricate and weighty, separated by massive regions, following the trials and tribulations of two different caravans: one predominantly varl, and the other a group of humans fleeing the destruction of their village at the hands of the Dredge. This split allows us to see the full extent of the devastation, as the two caravans travel east and west, wandering into devastated towns, burned down villages and through piles of corpses.

Hakon’s group – the Varl – are attempting to make their way to the Varl capital, with a human prince in tow, in the hopes of forging an alliance between the two races. It’s a group not unfamiliar with conflict, as both man and varl bicker constantly, neither really pleased with the other’s company. 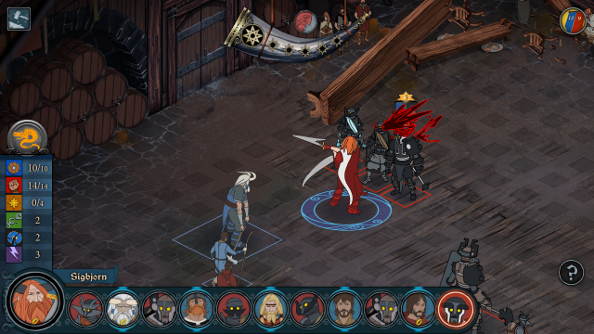 On the other side of the world, a group of desperate refugees led by the human hunter Rook search for safety, leaving dead family members and demolished homes behind them. Their trials are more personal, and Rook is mainly concerned with protecting those left in his charge by his dead chief.

The twin journeys are presented in gorgeous, hand-drawn scenes with the long caravans slowly moving across huge, frozen landscapes dotted with gargantuan monuments to the dead gods and fearful settlements. The art and animation are reminiscent of the work of Eyvind Earle, who was most famously responsible for Disney’s Sleeping Beauty, evoking memories of the studio’s most elegant era.

Punctuating these scenes are important decisions, text breaks in the journey that hark back to old Choose Your Own Adventure books or dialogue sequences presented in mainly static, yet lavishly detailed, art. These decisions are horrible things; sweat inducing choices where the result is never obvious and might take many hours to come to fruition. 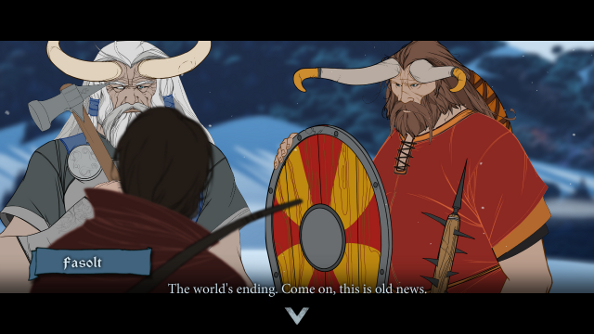 Welcoming a new group of refugees into the caravan might bolster your numbers, giving you a better fighting chance when it comes to a confrontation with the Dredge or some ne’er do wells, but these refugees might also rob you in the middle of the night and bugger off with all your supplies, leaving your people to starve in the frozen wastes.

Because the outcome of these decisions are never obvious, it pays to be a bit pragmatic, unless that’s not how you think the character you’re controlling would act. This is where the roleplaying aspect really comes to the forefront, and the shifting focus of the game, allowing players to experience multiple protagonists, means one can make strikingly different decisions based on who they are playing as.

Hakon, for instance, is a gruff warrior who never asked for all the responsibility he was given, and I tended to make gut decisions and usually ended up using my fists as often as my words. On the other hand, Rook is a father and a charismatic leader, and I often attempted to deal with people or solve disputes through diplomacy. 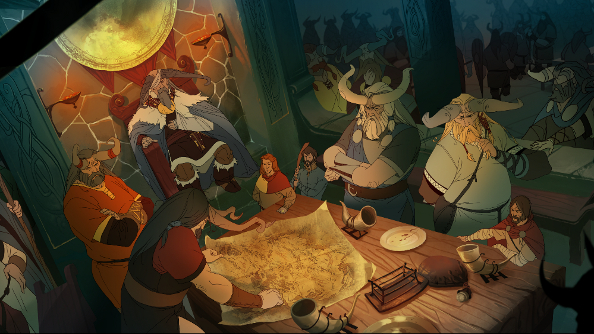 As the narrative progresses, however, decisions become increasingly hard to make and, as Rook, being a nice guy started to look like a really stupid option. He’d been betrayed, seen friends stabbed in the back, and his mind – and by extension my mind – was riddled with doubt. I started to ignore villages that might need my help, leave dying people in the snow, and I only cared about keeping the caravan moving.

While it was interesting to see the game forcing me to reassess my attitudes, especially in light of several betrayals, the starvation mechanic that also drove me to making tough calls was not nearly as welcome. There’s only one currency in The Banner Saga, and that’s renown. It’s gained mainly through battle, and a little bit through being a good leader, and it’s used to level up characters, buy artefacts and stock up on supplies.

Initially it didn’t throw any spanners in the works. The small number of playable characters and the size of the caravans meant that there was plenty of renown to go around. But by Chapter Six, it starts to get very difficult to keep on top off. Battles are tougher, but fewer; a plethora of new characters need to be leveled up unless you want to lose fights; and supplies start to get drained rapidly, sometimes because they get stolen. 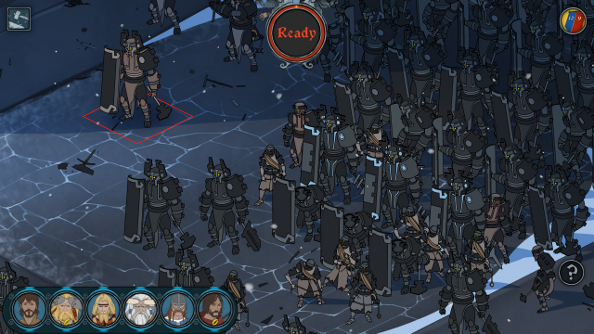 This culminated in Chapter Seven being a horrible slog, as everyone in my caravan was starving, causing low morale which led to my warriors being less effective in a fight. Much of this was entirely down to bad luck, which made it a hard pill to swallow, since there really wasn’t much I could do about it. Multiple currencies or at least more ways to generate currency than just battles would have made things a lot less frustrating.

Battles take two forms. The first involves the entire caravan and amounts to simply choosing a strategy, like charging the enemy or studying their formations. Make the wrong call and you could lose a whole heap of warriors. It’s not very hands-on, unfortunately, and only crops up a few times.

The second type of battle is a lot more involved, and this is where you’ll generate most of your renown. You start by picking your combatants out of an ever expanding list of characters, from hulking varl shieldbangers to swift archers. It’s a turn-based affair, with every unit moving across a grid. The size of the units plays a pivotal role in a scuffle, as the large varl and tougher Dredge take up four squares, which means they’ll sometimes block other characters.

Despite the lack of obstacles on the grid, navigating it can be treacherous. If you make a move but can’t reach your opponent, they might get to you first and deal a devastating blow, or you might move a varl towards an enemy only to realise you’ve blocked another character from diving into the fray. 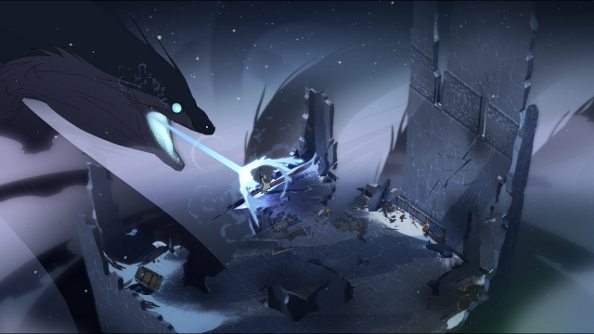 Each class has a special ability which can help turn the tide of a battle, from the tempest attack which causes a character to wildly spin, smashing foes in an arc, or powerful knockback abilities that damage armour and force foes to slide across the grid, away from those they want to destroy.

Perhaps the most intriguing aspect of the combat portion of The Banner Saga are the two pools each character has for strength and armour. Strength not only represents health, but also dictates how much damage a character can do, while armour is represents how much defense they have. So when you initiate an attack, you’ve got to decide if you want to damage strength of whittle down your enemy’s armour.

This necessitates thinking several moves ahead. Do you take off a chunk of armour, knowing that before that enemy takes his next turn your waiting archer will be able to do a great deal of damage to its health now that it’s no longer protected, or do you wear down its strength so that it can’t do as much harm to you or an ally on its next turn?

There is a lot to consider in each and every battle, and tactics change depending on who you are fighting. The Dredge, for example, though incredibly strong, have one considerable weakness. Striking them can cause shards of stone to fly off them and damage their allies, so it pays to herd them all together, baiting them into one tiny area so you can surround them and damage them all in one strike. 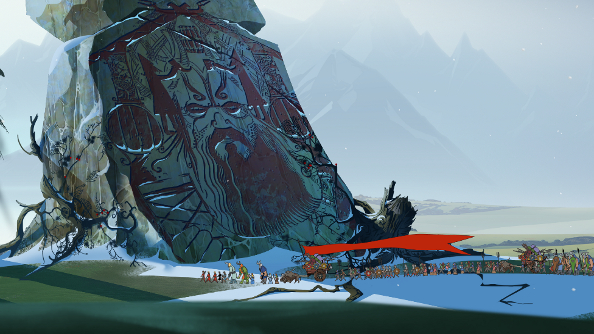 It’s challenging and thoughtful, but it does lamentably become repetitive. Much of this is psychological, since a great portion of the game sees you fighting exactly the same enemies over and over and over again. A few more enemy models alone would have made things drastically more interesting. There’s enough going on and enough space between the fights so that this never becomes a serious issue, but a desire to see a greater variety of foes was always at the back of my mind.

The Banner Saga is a game of contradictions. The caravan’s journey is entirely automated, giving players no control over its direction, yet the game is filled with choice and horrifying consequences. There’s a considerable amount of dialogue and lots of characters, some leaving quickly, some staying for the whole adventure, but learning about the impressive world Stoic has built requires work. There’s little exposition, and it’s through snippets of text and completely optional exploration of the map – you can click on locations and learn about them – where you’ll discover the world’s detailed, vibrant history. And it’s gorgeous, a complete and utter joy to look at and – thanks to Austin Wintory’s exceptional score – listen to, but it’s a game filled with misery and loss.

The renown mechanic was a huge misstep and the Dredge become a bit dull after 15 hours of slaughtering them, but Stoic has still managed to weave a compelling tapestry of epic conflicts with emotionally engaging characters. When I found myself with a dagger in my back courtesy of characters I trusted, I was enraged. When I saw my warriors survive against the impossible odds, I was elated. It’s a rollercoaster of agonising decisions and hard-won battles, and as filled with sadness as it is, I was just as sad to step off the ride.