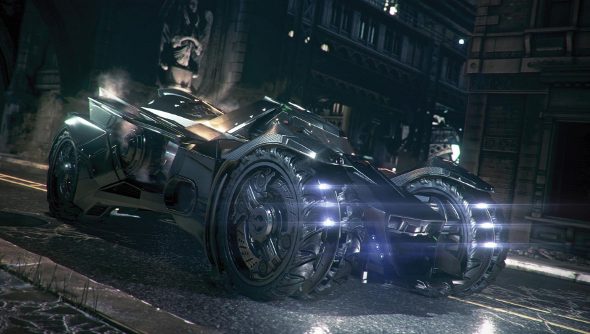 There are more than a few problems with Robin, the Boy Wonder. The big one is that it’s a little bit sinister, a grown man clad in black leather hanging out with a lithe teen wearing a tight, garish costume. And then there’s the fact that we’re meant to believe a wee kid could actually stand toe to toe with Gotham’s most notorious villains. Worse, sometimes Robin is Jason Todd. Those were dark times.

Rocksteady made a smart move when they decided that Batman’s partner in Arkham Knight would be a car, the Batmobile, specifically. It’s more than just a ride for Batman to cruise around in. Just take a look at the first part of the Ace Chemicals infiltration mission.

For a fella who hates guns, Batman really went all out when arming his car.

It sure looks fancy, though, doesn’t it? Infiltration implies a level of stealth that we’re really not seeing in the trailer, but who the hell cares when a remote controlled car-tank hybrid is knocking down walls and taking out goons.

Batman: Arkham Knight is due out next year, on June 2nd.