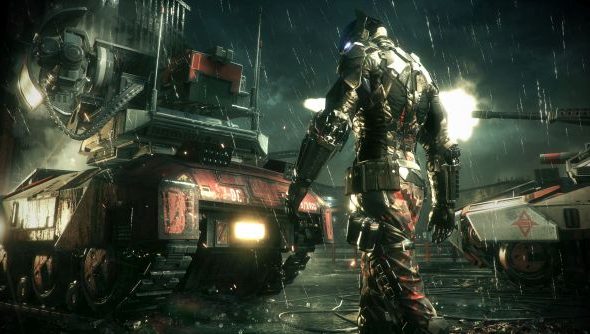 It’s now been a couple of months since Batman’s latest video game adventure, Arkham Knight, ‘launched’ on PC to thunderous problems and complaints. It was quickly removed from sale and apologised for, with Warner Bros. clearly taking things back to the drawing board on the port. Since then leaks and other sources have pointed at a working version of the port being months away, with little evidence to suggest otherwise. Today, on the official forums, an update has been provided that outlines where development is at with regards to fixing it.

Community manager Yorick described the upcoming patch as “interim” – indicating that it won’t be the version that brings the game back onto sale – and listed off what Warner Bros. were hoping to fix up:

Some fairly standard stuff here, but bringing it up to a releasable state will obviously be their first priority. Yorick also mentioned that various non-performance updates were on the radar, like the DLC content that’s already made it to consoles.

To move into the realm of speculation, I’d guess that the plan is to re-release a very well-tuned version of the game onto PC with some DLC included and lots of features that make the hardcore happy. FOV sliders, anti-aliasing options, ultra settings that less than half a percent of computers can even consider, skippable intro logos; that sort of thing. As well as a much needed apology, it would serve as an attempt to turn what’s been one of the worst PC launches in memory into a second wave of sales.

Which is fair enough, because people will want to play it, but obviously it needs to run smoother than average on the vast majority of machines. The slightest second of pop-in or poorly timed Batmobile FPS drop – which were fairly common on the PS4 version I played at launch on a friend’s console – will be lampooned across the internet far harsher than a new release would be.

The patch should be ready in the coming weeks, and Yorick promised to keep the community updated on its status as it goes through internal testing. We’d expect a re-launch of the game before the end of the year, but there’s no official confirmation.