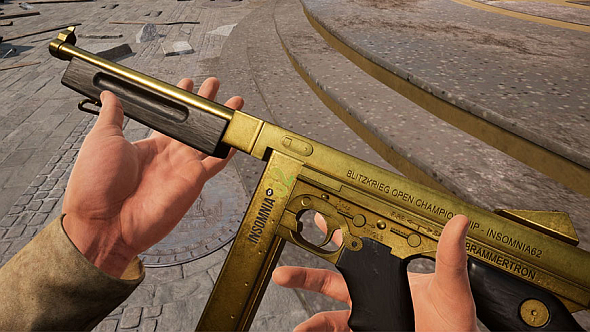 So, here’s fun. A few months ago, professional Battalion 1944 player Sam ‘Sus’ Hogan was “kind of being a dick” to the developers at Bulkhead Interactive. Specifically, he threatened to “shoot up the studio” if they didn’t hustle on sending him the golden weapon skin that he won in February’s Blitzkrieg Open. The devs have now honoured their promise and sent him a golden Thompson – with a picture of a dick on it.

The dick in question is on the underside of the gun, between the magazine and the foregrip, so it’s impossible to see from most angles. Frankly we think that’s a bit of a shame, as it’s impressively detailed, and was apparently drawn by Bulkhead studio lead Joe Brammer himself (perhaps he should sign it?)

For more hot lead, check out the best FPS games on PC.

Sus himself tweeted the ‘dick pic’ along with screens of a message from Brammer, under the caption “little bit of banter.” Brammer strikes a firm but fair tone: to Sus’s suggestion “it was just a joke,” he says “I fail to see anything funny about threatening to ‘shoot up a game studio’,” and presents the dick skin as “a lesson about comedy.”

“We discussed not rewarding you with your Golden Skin, but we thought that was maybe a bit much and nobody would gain anything from it.” Brammer concludes with best wishes and the offer of a drink at the coming Amsterdam Majorif Sus does well.

And indeed it looks like all the beef (or should that be pork?) between pro player Sus and Bulkhead is forgiven – Sus captioned the saga a “little bit of banter,” and Brammer retweeted:

Overall it’s a pretty great response to someone being a bit of a dick, and a handy reminder that devs are humans who very often share their audience’s passion for gaming – in particular, Bulkhead’s enthusiasm for FPS games and for esports has been evident since the earliest days of Battalion 1944.