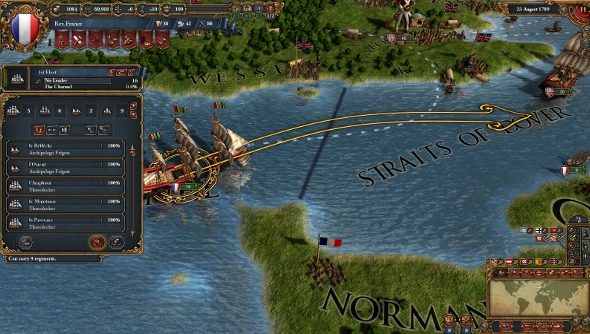 While I may have floundered with March of the Eagles at Paradox Con, shaming both England and PCGamesN, it was quite a different story where Europa Universalis IV was concerned. By the time the session ended with EU IV, the only question was whether Joe (Austria), the Escapist’s Greg Tito (Castille), or myself would rule Europe. And when we would start fighting.

But Joe and I took very different approaches to EU IV, which meant we explored different aspects of the game. We thought we’d compare war stories and see what we learned during the session.

Rob: Since I wanted to compare EU IV to EU III, I ended up picking France because I’ve played them several times before. France starts with a good position but it can go very wrong very quickly if you’re not careful: the country is divided into tiny duchies that only grudgingly obey the French throne, and England is still there in Normandie and the Aquitaine. Plus, Burgundy to the east is a very real threat: if Burgundy gets just a bit stronger, it can fight France on nearly-equal footing.

Knowing all this in advance, I was able to focus on the differences with this new version of Europa Universalis rather than try and figure out my strategic situation. My goals were pretty straightforward: first kick the English out of France, then start bringing those dukes to heel. I’d get lots of prestige points, which is how EU keeps score, for completing these objectives. I find it lends nice structure to an otherwise wide-open strategy game. It went better than I expected, but I made some big mistakes as I figured out the new system.

How did you find things with Austria? I don’t know their opening circumstances very well, but it sounded like you had to get pretty Machiavellian over there?

Joe: Well, I wanted to pick a Germanic state so that I could see what it would be like interacting with the Holy Roman Empire. Plus I’m going through a bit of phase, I blame it on my distant German heritage. Austria not only held the throne of the HRE, but was also one of the biggest Germanic states, so I didn’t have to struggle to much.

Unfortunately, Europa Universalis is not a series I’ve spent much time with. I’ve played the other franchises a lot more. It took me awhile to figure out then how things all worked – kind of got my head handed to me by Hungary, and Bavaria nicked a province from me that I was trying to take. Bastards.

Luckily for me though, Venice – controlled by Adam Smith and Fraser Brown – were my neighbors, so I decided to mess with them instead. Rob: So how did the HRE work for you? In EU III I thought it was way more trouble than it was worth. Keeping all those whining, useless electors in line took a ton of my attention, and the reward for being elected to the Imperial throne was the chance to govern an unresponsive and almost mutinous empire. On top of all that, I always seemed to be getting dragged into war on behalf of the Bishopric of Who Gives a Damn. Did you get a taste of Imperial power at all, or was it just soothing German nobles all the time?

Joe: To be honest, I kind of ignored it for the most part. You’re right, so many of my vassals were being picked on by one faction or another, and to be honest I couldn’t be bothered to go help them. This meant that my ‘Imperial Authority’ was eroded fairly quickly, although within the time-span we played that didn’t seem to make too much of a difference.

There are advantages of being Emperor, though. If I’m at war, I can walk my armies through any HRE territory without needing a treaty, and (and I’m not 100% sure on this), if a territory within the HRE falls to rebels and into chaos, I get to either take possession of it or restore it to its rightful owner. I just kept stealing other people’s provinces.

Adam and Fraser (playing Venice) were having trouble with a particular nasty group of rebels called the Lollards, who I think I was funding just for some giggles. So I decided to declare war on Venice to put them out of their misery. Well, not exactly – my short-term objectives required me to take some territory that they owned, and at this point in time I had nothing better to do. I did feel kinda bad because we’d made a pact right at the beginning to be allies.

Rob: Yes, I heard about this. I believe Paul called your play “sociopathic”.

Joe: Anyway – after a brief tussle, they said they’d give me one of the three territories I needed if I just left them alone. So I did. I then also got to take possession of a second territory because it had fallen to the Lollards. So there I was laughing at my good fortune whilst Adam and Fraser were cursing the heavens, and my lineage.

Rob: Yeah, I was kind of worried they were going to dump you in Reykjavik harbor after our game. How were you able to fund the rebels? Did you have tricksy national ideas selected? Because it seemed like you were really throwing gasoline on other people’s problems over there.

Joe: You can fund rebels through the diplomatic screen, it’s just one of the potential options along with marriage, alliances, war declaration, etc… I had some money to spare so I thought I’d see what happened. I don’t know about National Ideas, again that was something I didn’t really interact with much. Like you I was unlocking them at a steady right, and just click on random ones that seemed beneficial. I think my leader was a bit weak on military, so I hired someone to help out there.

Rob: Actually, we should talk a bit about administration points, which you use to do things like take national ideas and set new policies. I was lucky enough to have a pretty good monarch, and so I was getting ideas and decisions at a steady rate. I fell behind with the bank, but after I got a couple financial ideas selected, building French society around commerce, French fortunes started to turn around. Meanwhile, up in England, poor T.J. Hafer was watching England crumble thanks to a bad monarch and an inability to use administration points to mollify Welsh rebels. Admin points proved to be this really multifaceted resource.

The one thing I kind of wish… you can just sort of select national ideas for a set cost. It’s not like you have a predilection for any one set. That means that even though France had been all about warfare, my national ideas were basically all about banking. I guess what bothers me is that it lets your country become “multiclass” almost too easily. It feels like setting ideals that run counter to your actions should cost a little something extra. But maybe I’m overthinking it?

Joe: But I think every nation has to be able to multiclass, as these kinds of games can be punishing if you’re weak even in just one area. Rob: That’s a fair point. But something I enjoyed in EUIII (buckle up, Joe, we’re stepping into the Wayback Machine) was how policy had this wonderful inertia. If you went all-in on militarism in the early game, that probably mean fielding a lot of cavalry, highly-trained armies, and skilled officers. But that also meant making your society favor the aristocracy, which had other penalties associated with it. It was something you could easily regret when the time came to modernize. I’m sure you’ve seen similar mechanics at work with Victoria, which I think has an even sharper approach to the tension between short-term and long-term thinking.

So whatever policy shifts you set early in the game, they could be hard to undo as you became more and more beholden to them. EU IV has folded “national policies” into other systems, but I feel like some of that tension has been lost in the streamlining. I mean, I’m sure Louis XXVI really could have done with some bourgeois values and a more professionalized legal and political order. But there are also good reasons for why French kings and Russian Tsars were cornered by history, and I think EU IV might make it just a trifle too easy to push a button and fix a deep underlying problem.

But look at me becoming some sort of “historical accuracy” Puritan. Overall I’m curious whether you felt EU IV made sense to you, whether you were eventually able to feel your way to comfort with it. It certainly sounded like you were working diplomacy and subterfuge pretty hard, and I got the impression that you were playing with more systems than any of us. But you’ve been stressing that the EU series is not your home turf. I’m really curious whether you feel EU IV made you feel at home, because I know that’s one of Paradox’s goals with this edition.

Joe: That’s a very good question, and honestly I don’t really know how to answer that. The reason EU was never my home turf was because it didn’t really have any focus. Victoria was Economy and Colonialism, Hearts of Iron is Warfare, CK2 Medieval Politics… EU is this weird blend of everything. The reason I struggled so much at the beginning was because I was trying to play it like the other Paradox games.

I started to get the hang of things towards the end, but I don’t know, everything just seemed… harder. I trade playing around with the new trade interface, which I’m not sure whether or not I was successful at but hey, the money kept flowing. I meant to ask them why that system isn’t in CK2 2, actually. I would have thought it would have made sense for The Republic DLC. But yeah, I was essentially trying to do what Greg ended up doing with Castille, just annex a bunch of smaller states and grow my empire a bit, whilst working on some key alliances. I think my bad start handicapped me a bit though.

I think it makes as much sense as EU III did, so provided I get a chance to really sit down and play around with it, I think I’ll get the hang of it.

Rob: I hope so. I definitely thought EU IV looked like a significant upgrade from the previous version, and I think once you get the hang of it you’ll find it’s kind of a best-of-both-worlds blend of Crusader Kings and Victoria. But really, I’m just eager for another multiplayer session, and to see what happens to us the next time we play with those guys. We had a really successful session, but I think we may be marked men because of it.