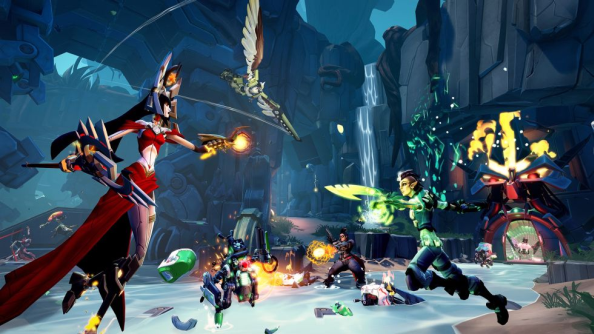 The hero-shooter sphere is now crowded enough to support its own retail meta-arena, filled with upcoming videogames vying for the MOBA-ish crown. But Gearbox have co-op chops their competitors don’t, and will be flaunting them with two story episodes come Battleborn’s newly-announced open beta on April 13th.

Here’s how Gearbox design lessons are flowing from Borderlands to Battleborn.

Named Void’s Edge and The Algorithm, the episodes will be accompanied by three competitive multiplayer modes, all 25 heroes and the full progression systems planned for the finished game.

In Battleborn story mode, players will take on the command of an elite multi-species task force and act as the ‘stars’ of each episode. Gearbox think of the eight episodes and a prologue included in the full game as a ‘season’ of self-contained but interlinked tales, and the May 3rd release date as their ‘premiere’. Inverted comma city, basically.

A new trailer should offer a little insight into the vibe of the thing:

Head to the official site for more on the Battleborn open beta. Do you expect you’ll play in that?