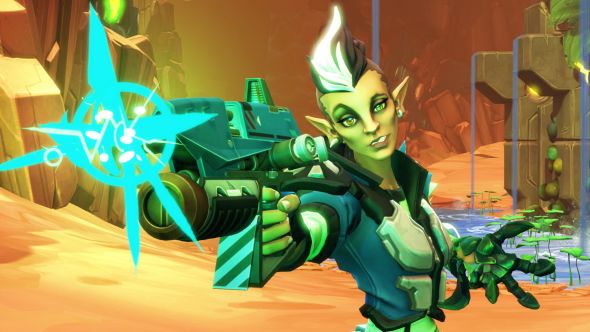 If you’d rather read about something less sordid, here are the best indie games on PC. No? Fine, then.

The whole dreary saga began with the following tweet by Pitchford yesterday.

VERY NSFW, but I have received reports that BattlebornRule34 is now a thing on Reddit. LINK WITH CAUTION: https://t.co/laA7tR4Dgs

Anyway, the replies to Pitchford’s tweet are a dark, but darkly amusing, sinkhole of cynicism and scorn. Naturally the assumption is made that this is an especially desperate attempt to draw attention to Battleborn, which might charitably be described as ‘embattled’. There are screens of Battleborn on-sale at bargain basement prices. There are ‘burns’ suggesting more players are on the subreddit than playing Battleborn. Many of the digs come from Overwatch fans, whose favourite game released in the same window as Battleborn and was commonly seen as a competitor (despite their similarities having been overstated, in my view).

I can’t put it off any longer; yes, I suppose I should probably link you to the subreddit. Obvious warning: It’s very much NSFW. Here you go.