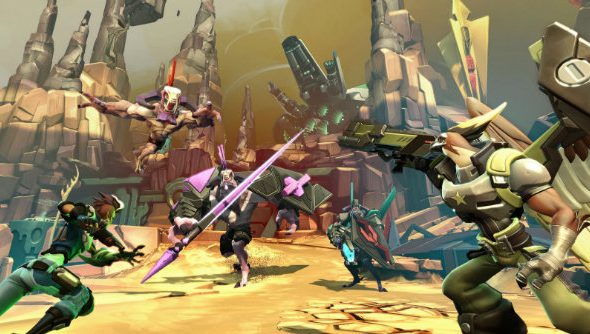 Update July 26, 2016: As if the 2K Humble Bundle wasn’t already amazing value, four more games have just been added to the lineup.

If you purchase the 2K Humble Bundle now, you get a total of 12 games, including Battleborn, for $15.

Related: run your eyes over our list of PC’s best FPS games.

The four new games that have just been added are Freedom Force, Freedom Force vs. The Third Reich, The Bureau: XCOM Declassified and Railroad Tycoon 3. These join the games listed below.

Original Story July 19, 2016: The 2K Humble Bundle is a cracker, offering Battleborn and eight other games for $15. You get a bunch of games cheap and you support a charity while you’re at it. Go you.

You can pay more if you’re feeling charitable, but $15 will get you Battleborn, some Battleborn in-game currency, some Battleborn skins, Borderlands: The Pre-Sequel, Mafia 2, NBA 2K16, Civilization V, Darkness 2, Spec Ops: The Line, Duke Nukem Forever (just ignore that one if you want) and another yet-to-be-announced game.

While some might take this as proof that Battleborn failed, hopefully the game going so cheap will give it the player injection it sorely needs. Even discounting Battleborn, it’s a damn good deal.

I’ve played Civ V for 26 hours and I’m still playing my first match. It’s fantastic and will last you forever. Spec Ops: The Line is a bit of an underrated gem – average shooting in a great setting and backed by an intriguing story. Likewise, Darkness 2 is kinda overlooked, despite being stylish, short and sweet. Mafia 2 still holds up today and is probably worth a revisit before the sequel appears later this year.

Head to the Humble Bundle site to grab this bargain.