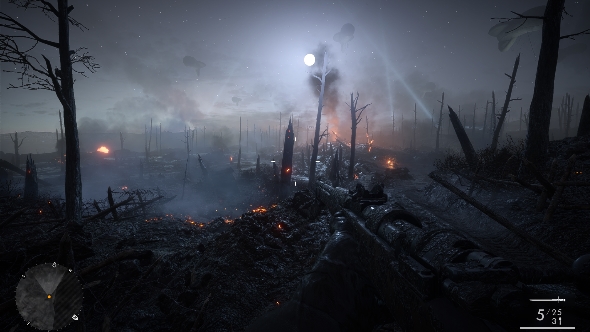 Since launch, there’s been an easter egg hunt / ARG running through Battlefield 1’s various maps. It involves everything from morse code translation to key deciphering, in-map hunts and spooky messages. It’s been slowly developing since release, patches adding new segments, and has finally culminated in a special dogtag named ‘A Beginning’ in the last week.

More interested in, y’know, the game? Here are the best FPS games on PC.

The full process is ridiculously laborious, starting with finding headphones in one of five locations on various maps, most easily completed in empty servers for obvious reasons. You then take them to semi-hidden MCOM stations, which will broadcast morse code at you. Translate that, you get a location, with no way to know which you’ve been assigned. Go through this process nine times, and you’re told to head to a tower on one of the maps, look up at some pigeons and then ding – new dogtag.

If you want to do it, instructions and full details are over on the ever-reliable Game Detectives Wiki, along with details of what changed when. As linked there, much of the work was done by the Battlefield easter egg Discord channel. Various YouTubers have also covered the full process if you want a primer, here’s JackFrags:

Given the title of the dogtag, as well as the nature of ARGs, it’s assumed this isn’t quite over yet. Speculation is rife as to where it could all be leading, and will likely involve trekking through DLC maps in the near future. The current final stage of the secret, which broadcasts the word Masterman at players, suggests a tie to Charles Masterman, part of the British propaganda campaign during the war.

Plenty more leads being killed or uncovered on a regular basis, but the main discoveries are probably over until the next patch. At which point, presumably, they’ll start seeing a purple skull symbol, if recent ARGs are anything to go by.