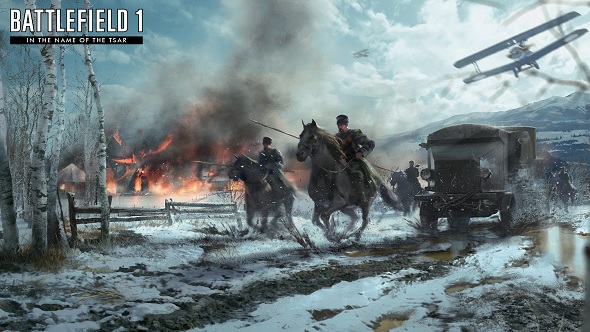 Following the successful launch of the They Shall Not Pass DLC last month, EA and DICE have set out their upcoming plans for Battlefield 1 in their most recent ‘The Road Ahead’ developer blog. Besides showing off some more concept art for the upcoming In the Name of the Tsar expansion, they have announced that they will be switching to monthly updates for future content releases.

For those looking to test their aim, have a rifle through our list of top PC shooters.

Before this, Battlefield 1 was updated via large seasonal patches, like the previous Winter update and the upcoming Spring update. As the frequency of content releases is set to increase in the new year, updates will now come every month starting with the May update. If you have access to the Community Test Environment, DICE will be relying on your feedback to quickly iterate on these monthly updates.

The Spring update is set to be a huge rework of many of Battlefield 1’s mechanics, with DICE finally adding the long awaited platoon system. Present in both Battlefield 3 and 4, these groups allow players to join together under a single banner to “achieve goals as one unit”, according to the developer update. It means it is much easier to get games with a static group of players, rather than relying on pubs when going on a sortie into the No Man’s Land of online play.

Looking forward to May, DICE are planning to focus the May update around several quality of life changes for Battlefield 1. This mainly concerning streamlining the flow of matches, especially for Operations, as well as balancing certain aspects of the combat to “make the action feel more balanced and fair.” The Battlefield 1 Rent-A-Server update is also scheduled to roll out around May, meaning you can finally run private servers with your own unique game rules.

Capping off this developer update, DICE released some additional concept art of the next expansion, In the Name of the Tsar. Taking place on the freezing Eastern Front, this DLC has players fighting alongside the Russian army in the bitter cold of the Siberian winter. You’ll be driving armoured trains through the snow and sailing up ice floes to strike back against enemy forces.