Once again DICE are asking us to lock and load for another tour of duty, this time in Battlefield 1. After Visceral took the reins on the last game and made it a cops-and-criminals affair, DICE are back in the pilot’s seat and are taking us on a tour of the Great War. That’s right – we’re living out the early days of modern warfare in World War 1. 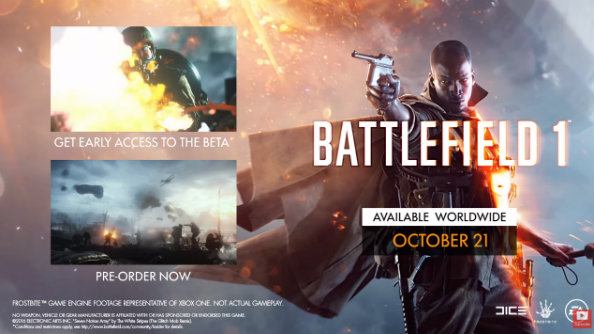 If you want to get stuck in as early as possible, subscribers of Origin Access will be able to play Battlefield 1 on a trial basis for free from October 13th.

Can you run it? Check your PC against the Battlefield 1 system requirements 2021 over on PCGameBenchmark. 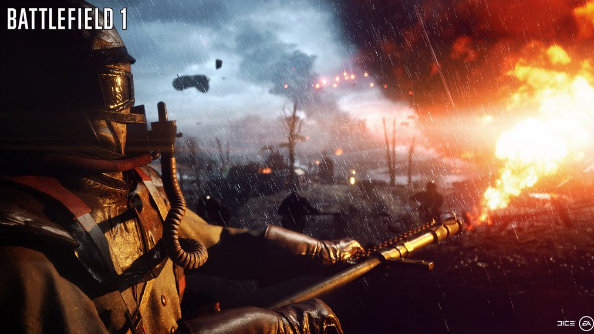 Battlefield 1 is set during the First World War, mixing trench warfare into its established mix of vehicle and infantry combat. It will feature biplanes zipping through canyons while locked in dogfights, horseback cavalry charges, flamethrowers, trenches flooded with mustard gas, tanks and cowering in the shadows of massive zeppelins.

Being a World War and everything, you will fight in battles all over the globe, such as the Western Front in Europe and the deserts of North Africa. It’s more of a fantastical look at World War One, with an emphasis on machinery and tech rather than the crushing reality of the conflict.

The Battlefield 1 livestream at the EA Play event demonstrated an hour of gameplay: our real first look at how a large-scale 64-player match will play. Since then the early access builds have been sent out and we’ve played the first hour of single-player. See that above. There’s also some 4K multiplayer below, showing off Battlefield’s much loved destruction system, but in a new iteration that DICE have dubbed “Intuitive Destruction,” which promises to be more realistic and logical than ever before.

There’s also a dynamic weather system, meaning that fog can roll in to give you cover from an accurate sniper, or rain could conceal your approach on a point. Holes blown in the terrain will dynamically fill with water when it rains. It promises to add a little bit of spice to the game’s maps.

Also coming to the game are Behemoths– gigantic war machines that will give players the edge if they can use it properly. One such behemoth, the zeppelin, allows players to rain fire down across the whole map, as long as they can be protected. They’re a massive focal point for the conflict, and when you bring them down they’ll lay waste to everything underneath. 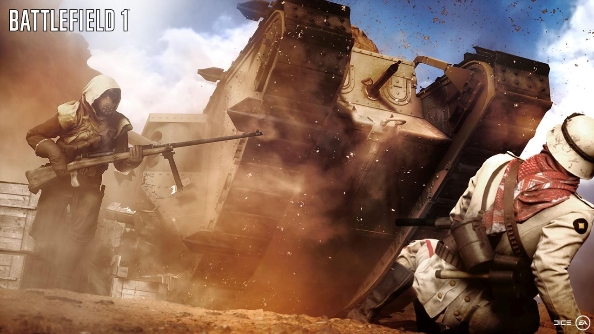 Once again Battlefield will use a class-based structure for its multiplayer, formed around the key four soldier types of assault, support, medic, and scout. This time though, a further two classes will be introduced: pilots and tankers. These new classes are focussed completely on vehicles and are the only class that can use their respective planes and tanks.

There are major adjustments to the system: assault is now your primary anti-vehicle class, while medics can heal tanks as well as people. This removes the need for the engineer entirely.

Classes have more access to melee combat weapons than in previous Battlefield games, with trench tools like maces, axes, and shovels used to beat enemy players on the head, and the ability to fix bayonets to rifles and charge.

Weapons will be drawn from six different classes: shotguns, SMGs, LMGs, semi-autos, sidearms, and sniper-rifles. A collection of those weapons will be the earliest deployments of their kind; SMGs were invented during the war and were used for the very first time during trench warfare. For some extra firepower, explosives such as frag and gas grenades will be available.

This time around Battlefield is attempting to streamline weapon attachments. Each gun will have up to three different pre-set configurations, designed to help it fulfill slightly different roles, such as marksman (with added scopes) or close-quarters (with grips and bayonets). This means you won’t have to grind for a gun’s best attachments, which is always welcome.

The six classes will be available for each of the game’s six factions. The allied powers will be represented by Britain, America, and Italy, while the axis forces will be fronted by Germany, Austria-Hungary and the Ottoman Empire. 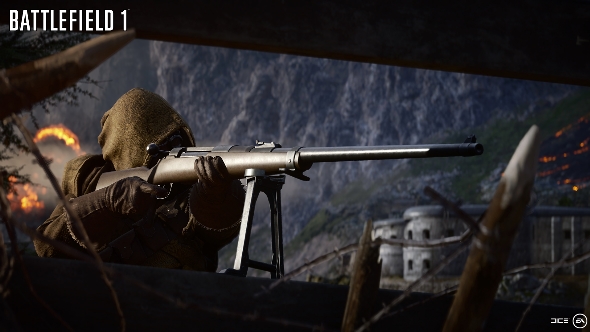 DICE are keen to explore some of the more extreme areas of tech used during World War One, but letting everyone run around with flamethrowers might detract from their vision somewhat. Their solution: Elite Classes. These special units can be found by picking up weapon crates throughout the map. Three have been included so far: Sentry, Flame Trooper and Tank Hunter. 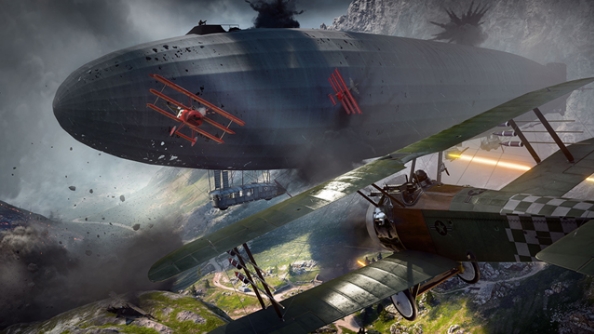 Battlefield 1will launch with nine maps with a tenth map arriving for free in December. The selection of locales is diverse and varied, giving a true flavour of how global the First World War was – from grand chateaus to the densely overgrown Argonne Forest. 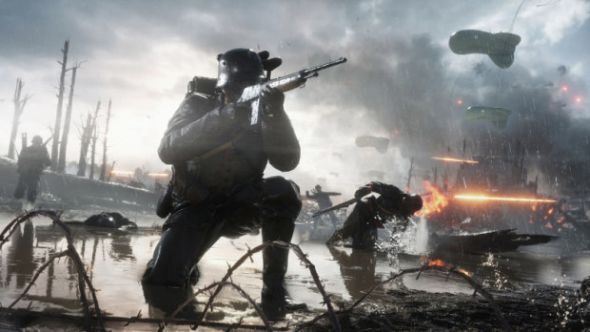 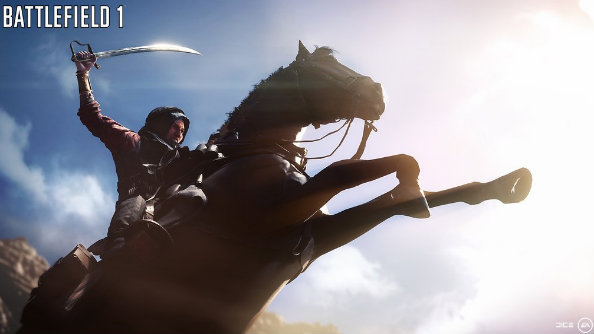 Battlefield 1 will have a single-player campaign that will see us visit many various areas and battles of the First World War. The missions will show the conflict from a few different perspectives as to better detail the scope of the war. This is done via War Stories, a non-linear structure that allows you to pick and choose how much time you spend with the British Tank divisions or at Gallipoli. Full details on each of them are in our dedicated Battlefield 1 Campaign article. 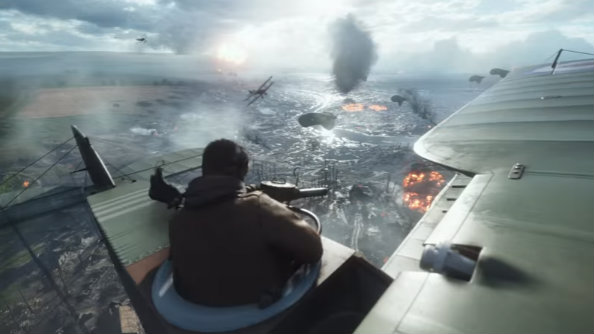 DLC and lots of it. Battlefield 1 will be launching without two of the war’s most important belligerents, France and Russia. But provided you’re willing to pay for the privilege, both will be making it to the game in the form of purchasable content. And in case there was any doubt: yes there’s a Battlefield 1 season pass, available for £39.99/$49.99.

But what’s in the Battlefield 1 Premium Pass? The content bundle will add new Operations, Elite classes, vehicles, 16 multiplayer maps, 20 weapons, 14 dog tags, and 14 Battlepacks, which will have some unique weapon skins to boot. These will roll out on a monthly basis starting in November 2016. Of course the main bits of DLC are the themed expansion packs, of which the only that’s been confirmed is They Shall Not Pass. There will be four of these expansions in total and Premium Pass holders will get early access to each of them two weeks in advance.

They Shall Not Pass adds the French as a playable faction to the game in March 2017. We also know that another planned expansion will add the Russian Empire. It hasn’t been confirmed if this means more War Stories or not.

That up there is the exciting announcement trailer for Battlefield 1, which shows horseback riding, trench hiding, all-out warfare and smacking some bloke around the chops with a shovel.

Finally, here’s a selection of trailers for the single player campaign:

It’s nearly upon us – Battlefield 1 will pop up tonight.