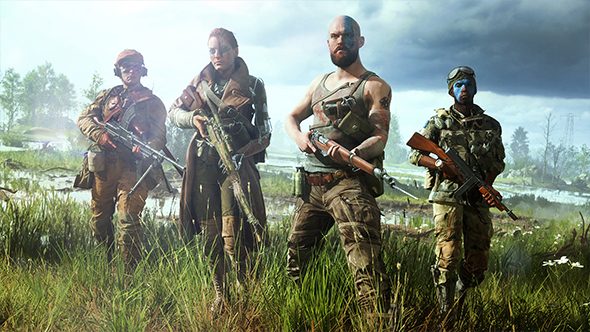 Battlefield V’s Tides of War means new story content will arrive in the game “every few months,” and that Battlefield V will launch with just two factions – the British, and the Germans. In perhaps the game’s most historically-accurate statement yet, DICE revealed that American soldiers would not be playable at the beginning of the war.

In a series of blog posts, DICE had been discussing how your band of soldiers will evolve over time, as the war progresses. As mentioned above, the game will launch with just two factions. While the UK and Germany were clearly pretty major players in the war, the decision to leave out French, Italian, and Russian soldiers at this point is surprising.

Battlefield and COD are the biggest, but which are the best FPS games?

The most recent blog post also details Tides of War – DICE’s ongoing solution to prevent premium content from separating the community. Tides of War “will be an evolving journey featuring a new narrative every few months,” that will allow the developer to grow the game’s world over time. Every few months, new story will be released, with each chapter focusing on a “particular aspect of the era.”

Tides of War will begin with the Fall of Europe, and operations will span several months of new missions and timed events. As new chapters are released, more factions will be released, but there is no current roadmap for those releases.

For each faction in the game, you’ll have one Company, each containing a “set of soldiers, vehicles, and aircraft.” Companies can be developed over time by playing the game to unlock new abilities and customisation options, as well as new archetypes allowing you to set your character’s class specialisation.

The Battlefield V release date is currently set for October 19, 2018, so you’ve got a few months to wait before you can start building your company. To help tide you over until then, it might be worth checking back in on Battlefield 1942, as Battlefield V might get remakes of Omaha Beach and El-Alamein. Sure, the maps will probably have be updated, but it can’t hurt to go and get a little bit of practice in before the new game gets released.