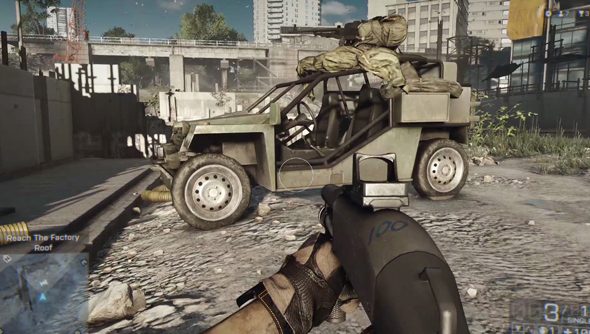 AMD have been talking a lot about their Mantle API – a police megaphone soldered into your PC that lets supported games talk directly to your graphics card without bothering with DirectX’s cup-and-string routine. They’ve said that it’ll run with Battlefield 4. They’ve said that it’ll run games up to 45% faster than DirectX, and shown an spaceship demo to prove it. But this is the first time we’ve caught them saying both in the same sentence.

“It’s up to 45% faster than the original version on this same hardware,” says AMD’s CES Man on Stage of Battlefield 4. That’s his statistic to quote, of course, and ours to choose to believe. But beyond an embarrassing moment of stage fright in its opening seconds, the footage below really does run smooth as butter (things kick off at the 30.55 mark):

Mantle exploits a core renderer like that used in the PS4, in which AMD’s hardware resides. The manufacturer reckon it’ll visibly improve performance in a range of supported games, including all of EA’s upcoming Frostbite 3 games. So that’s nice.