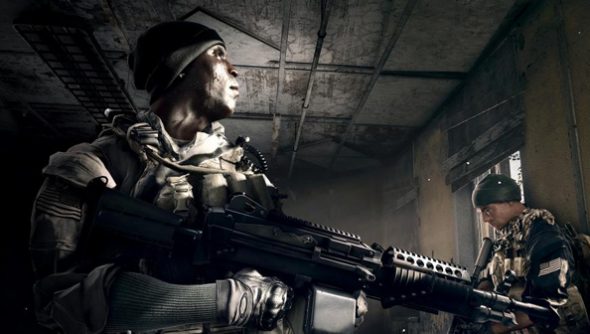 Battlefield 4’s ginormous 17-minute trailer was a helluva thing. Remember that bit when Bonnie Tyler shot the window and the water came running in like Rainbow Six? I think I remember that. Anyway, DICE reckon that if you watched hard enough, you can “extrapolate a lot of features that you can then translate into either the singleplayer or the multiplayer”. Reason being: Battlefield single player is taking more of its cues from the online arena of death and dirtbikes this time around.

“One of the things we’re most happy with is that people actually pick up on the characters,” DICE exec producer Patrick Bach told Edge of the Battlefield 4 campaign. “They remember their names. How often do you do that in a game, really?”

DICE aim to take the bond and sense of camaraderie players enjoy in multiplayer squads with friends, and transplant it into the fictional, single player characters set to accompany the player throughout the campaign.

“For us it’s important to grow up a bit and create a great story, a character you care about, where you feel involved in their actions and that’s based on the core idea of the whole game, that we want to move elements of multiplayer into singleplayer,” explained Bach.

“If you’re playing multiplayer, you actually care about the guys in your squad, those are often your friends, they have their personalities, you help them, they help you, and they have their own mindset. Now we need to create a singleplayer that mimics that feeling.

“Our goal is to create the perfect Battlefield movie, where you do all the things you do in multiplayer at some point, where you have choice, where you have these characters that you care about, that evolves over time,” he added.

“We actually have features that are pulled directly from multiplayer instead of having two separate paths.”

Conversely, Bach also suggested that “most” of the mechanical elements seen in the trailer will translate back to multiplayer too.

“Most of those things will be part of multiplayer. Then again, if it destroys the multiplayer experience, we will of course tone it down,” he said. “Dust clouds taking over the whole map could be really cool, but it could also be too much. For us, without spoiling anything, you can see the possibilities we have with the technology and the creativity on the team. We could potentially do all of that.

“We have this saying ‘fun first’ – even if it looks great, if it’s not fun to play then it’s just a pretty picture. For some people that’s important and cool, but to us it’s just one of the elements of the great experience.”

What mainstays of Battlefield multiplayer would you like to see tipped into its oft-lacklustre single player mode? I’ve my fingers crossed for some wide open spaces, for starters.