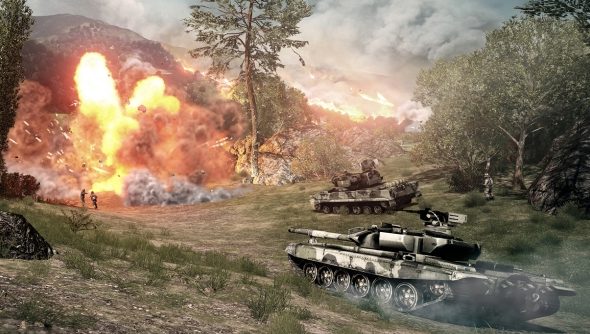 I like the idea of Battlefield 3’s upcoming themed DLC packs: it really does speak to the idea of experimental content that pushes the main game in different directions, something that so many developers seem to avoid. So while the next DLC, Close Quarters, is all about small fighting arenas filled with lots of things to break (Read our preview, here), Autumn’s Armored Kill expansion takes the opposite approach.

If you like vehicle combat, and standing looking at the gorgeous vistas the Battlefield 3 engine is capable of producing, Armored Kill will be the DLC you should be keeping an eye on. It was born out of a challenge: DICE kept cramming more and more vehicles into a map and having to make the make the thing bigger and bigger. Imagine the team crowding around a designer’s PC, placing bets on how many tanks would fit before the game’s engine threatened to sue them over workplace harassment. That’s how it came about. Lead designer Gustav Halling says Armored Kill’s maps rivals “Fushe Pass, Dragon Valley and Wetlands” in terms of size, those giant, rangy PC -specific , 64-player maps from Battlefield of yore. But, you know, bigger.

Expect a few of the four maps to feel rather open: the current list of new vehicles includes: “driveable tanks, ATVs, mobile artillery”, which suggests arenas more suited to driving across than something like Battlefield 2’s Dragon Valley: open spaces where tank shells can fly freely across the terrain, unfettered by pesky landcape. According to Halling: “Flags will also be less clustered in general in AK giving more room for vehicles, but at the same time we can’t forget about infantry also.” So the control points will be a decent distance from each other, which suggests maps will be pushing out along all axes, rather than being long and thin.

Air queens won’t be forgotten, though. Halling’s a big fan of the often badly utilised Little Birds: “I also love Scout helicopters” he said in March. “I want to see more of them. I can’t specify more atm but I want them to be a bigger part of BF3 on all SKUs.” So expect some maps to allow for some interesting aerial manoeuvring, given how nimble those particular choppers are, although there’s no word of any new planes or choppers, given that these are vehicle heavy maps I’d expect some form of new air violenceinator to be included.

Mobile artillery will be coming in with the DLC: driveable big guns that you’ll manoeuvre around the map into a position to shell your target. The current plan is to allow only one driver to use them, to stop someone driving away with the gun you spent time setting up (ala 1942, according to Halling: “1942 you drove your artillery into the perfect place and as soon as you switched to fire some noob took it and drove away with it, making you unable to use it.”), which means simplifying functionality: something akin to the current Battlefield 3 mortar set-up combined with a vehicle is being considered, where you’d drive to your chosen position and swap to an aerial view to gain a firing solution. It’ll give you a view of the area around the artillery, not the whole map, and you won’t be able to drive and shoot at the same time, as that would basically make it a tank. It could, and probably will, be augmented with a spotter using a Laser Marker, because this is still a team game, but DICE are still considering the balance of the system and are asking the community for input.

That last point is wonderful: Halling’s genuinely interested in the feedback the community has for what his team are building. With Battlefield 3 already out, it would be easy for DICE and EA to spam out unoriginal map packs that lazily mine the series’ classics (which they did in Back To Karkand, but only once), but directing the game along a more experimental track and having a continual dialogue with the fans, even asking them for suggestions as to how elements might best work, is bold and brave and completely not what you’d expect.