Games Workshop is a strange duck. While they’ve stopped producing all their “specialist” games so they can get down to the important business of draining the fans of Warhammer and 40k of all their cash with endless, increasingly baroque releases, they’ve been strangely free with the licenses when it comes to video games, making me often unclear on if they actually care about their wider franchises or just see it as a quick buck.

Of course, what we know is that even if Games Workshop don’t seem to care that much, the developers that they get on hand are, to a one, utterly enthusiastic and reverent about the games they get to work on. Take Battlefleet Gothic, which quite honestly is one of the lowest on the rung of “Games Workshop games we wish were still about” (even if, by all accounts, it was pretty good) which French developer Tindalos Interactive are, genuinely, thrilled to be working on.

For fans of Battlefleet Gothic, however, Battlefleet Gothic: Armada is possibly a bit of a disappointment, as unlike Blood Bowl or its sequel, it isn’t “just the board game, but on a computer.” Instead it’s a space-based RTS! Except, for fans of space-based RTS games, it’s possibly also a bit of a disappointment, because it’s played on a 2D plane, meaning there’s no fun Homeworld-esque all-direction madness. Instead, it falls between the two chairs, drawing a lot from the tabletop, but also from the RTS. 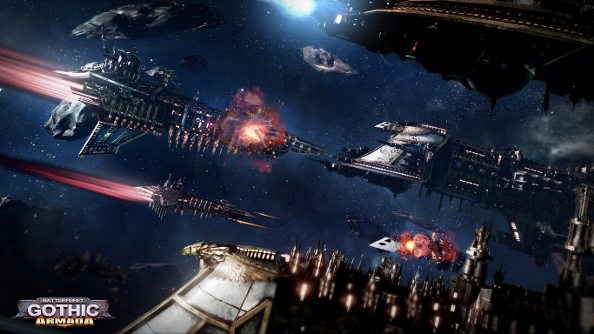 So, while you will be using ships, weapons and concepts from the board game more or less wholesale, you’ll also be using Tindalos’ clever AI system to help with ships that you don’t have your eye on at the exact minute (they’ll even warp away from battle if they’re in trouble—enemies will too!) as you flick between ships and skirmishes making sure everything is ticking over nicely, while marvelling at the strangely gorgeous spectacle of giant space cathedrals blowing the ever-living shit out of each other.

Tindalos were excited to show us their skirmish mode—which more or less works just like the board game, where you select an amount of points, create a fleet and go for it against another player or the AI—and the experience looked effortless to get going and genuinely fun. But of course, the meat is in the campaign mode, where (sadly) you’re stuck playing only the imperium, but which unfolds like a large scale FTL: not only can lose ships and captains you’ve been building up forever, you can even lose planets.

I’ll be honest: Battlefleet Gothic: Armada, despite the amazing graphics and clear playability, feels a little… niche. But if you’ve always wanted to see the Vatican with cannons on it, in space, well, you’ve found your game.