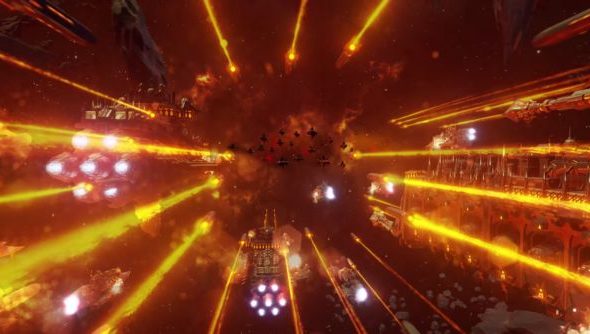 If you were to take a quick glance at the ships in Battlefleet Gothic: Armada, you might be fooled into thinking they’re a bunch of peaceful, space-wandering cathedrals. Upon closer inspection however, you’d find that every nook and cranny has been filled with a concerning amount of deadly weaponry.

Focus Home Interactive and developers Tindalos Interactive have released a short teaser that answers one simple question: how many missiles can you fit on a spaceship. Not enough apparently.

It looks a bit MAD. No I’m serious: it looks like Mutually Assured Destruction to me. Tindalos Interactive are pretty confident with what they’ve managed to achieve so far; you can read all about their development here. For some hands-on, Jules had a lovely time – he says it has the “best weaponised space cathedrals in gaming, ever”. That’s a glowing recommendation if I ever saw one.

Battlefleet Gothic: Armada is due out later this year.