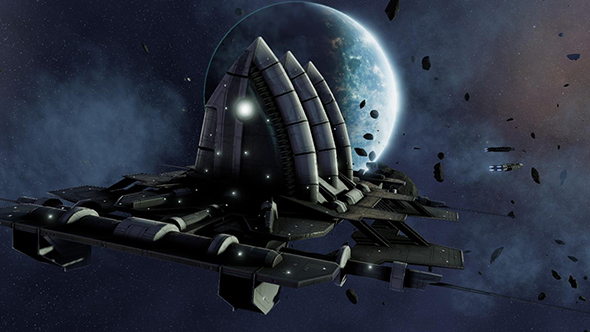 We had two major shockers when Battlestar Galactica Deadlock released last year. First, it was a new Battlestar Galactica game in 2017, and second, it was actually pretty good. Developers Black Lab Games have more in store for players of the galactic tactics game, with a sizable expansion called The Broken Alliance set to launch later this year.

A new campaign encompassing eight new missions will be integrated into the single-player game detailing a new plot around Colonial politics. Things open up as the Colonial Fleet gets an unusual request from Aquaria, starting a chain reaction that promises to turn the tide of the war.

In addition to extra campaign content, The Broken Alliance also brings new capital ships and squadrons to both sides of the war. The Colonial Fleet gets the lightly-armoured but heavily-armed Minerva-class Battlestar, the Celestra-class resupply ship to keep friendly units in good repair with armour-supplying drones, and Assault Raptor squadrons capable of solid anti-capital support.

Cylons get the Argos-class Basestar loaded with hangars and missile tubes, a Hydra-class resupply ship which can offer fire control to heighten the power of friendly missiles, and Scorpion Sentry drones which can defend against missiles and are equipped with high-caliber guns.

The Broken Alliance will be the second DLC add-on for Deadlock, with the $4.99 / £3.99 / €4.99 Reinforcement Pack having added a handful of new ships and other added weaponry. The new expansion is set to launch in the second quarter of this year. (That’s the quarter we’re in right now.)