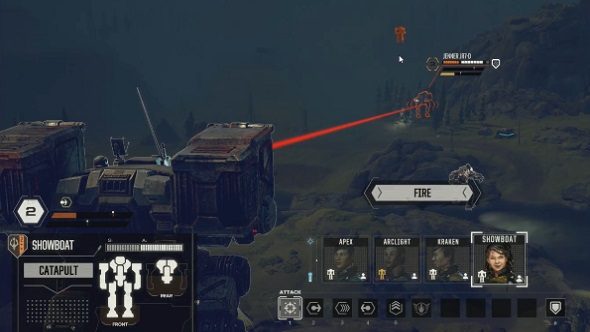 As a welcome follow-up to the news that Battletech will be published by world-renowned strategy publisher Paradox, developer Harebrained Schemes have released a new video to show off Battletech’s multiplayer. Showing off a typical multiplayer match, this near hour worth of footage should satiate any eager Battletech fans.

Sharpen up your tactics with these PC strategy games.

Pitting game director Mike McCain versus studio manager Mitch Gitelman, this friendly exhibition match has the two facing off on one of Battletech’s arena maps called River Crossing. While this game has the two fighting at night, each map has its own set of “moods”, where players can tweak weather, time and even seasonal settings of each map.

Until the two actually engage in combat, Battletech is in Free Move mode where players can order their units to move in any order and without having to wait until the previous unit has finished moving. Once the two get in range of each other, they enter the traditional Interleaved Combat phase, where there is a set turn and phase order based on the size of your mech.

Players can choose to “reserve” each of their mech, allowing them to move down a rank in the phase order. Say if you have only one light mech and the rest of your squad are heavy mechs, you could reserve your light mech from phase 4 all the way down to phase 1, so you can move your whole squad in a single phase.

Throughout the match, McCain and Gitelman show off mechanics like stability, jumping and sprinting, special mech abilities as well as the morale and inspiration system. Helpfully, Harebrained Schemes have provided a special set of annotations for this video in order to explain certain decisions and mechanics mentioned during this near hour of gameplay. I would definitely recommend watching with the annotations in order to get the most out of this footage.