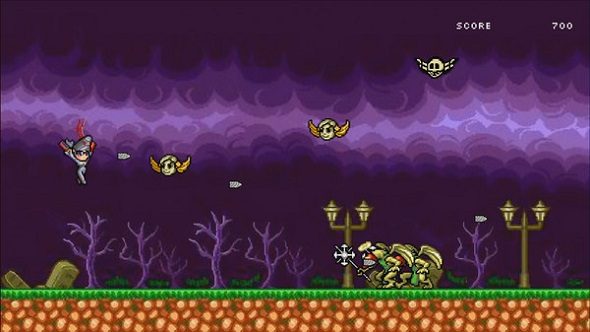 Masquerading as an April Fools joke, Sega have stealthily announced that the original Bayonetta may be coming to Steam on April 11. Hidden within the achievements of a free to play platformer, Sega have included quite a large hint that points to Bayonetta’s long awaited debut on Steam.

Don’t get lost in the shuffle – here are all of the best upcoming PC games.

The first piece of the puzzle comes in the form of a game Sega released on Steam earlier today. Named ‘8-Bit Bayonetta’, this free to play platformer has players shooting angels and collecting halos as a pixelated version of the Umbra Witch. At first, it’s easy to cast this off as a simple April Fools joke which will be taken down come the end of the day. However, the game has 16 Steam achievements which piece together to form the cover art from the Wii U remaster of the original Bayonetta.

Moreover, the achievements lead to a countdown site found on Sega’s website, which stops on April 11. With the site showing an image of Bayonetta’s famous pistol high-heels, it’s fair to assume that Sega are hinting that the original Bayonetta will be coming to Steam on that date.

While the actual joke game is quite fun in itself – complete with chiptune renditions of songs from Bayonetta – this announcement is what a lot of spectacle fighter fans have been waiting for. Based on Sega’s previous PC remasters of games like Valkyria Chronicles, one hopes that this re-release of the original Bayonetta should be up to snuff. Based on the image shown in the achievements, I imagine it will be based on the Wii U remaster of Bayonetta, seeing as that is the most stable of the three console versions.

It’s unlikely that Bayonetta 2 will be making its way to PC anytime soon though, as the sequel is very much a Nintendo exclusive. Also, expect all the Nintendo references from the Wii U remaster to be stripped out if that version of the game does make it to Steam.

In any case, action fans should mark April 11 on their calendar and keep a watchful eye on Steam for additional news about Bayonetta’s potential release.