Christmas may only come round once a year but it certainly knows how to make life incredibly difficult. Not only does it force you to brave that familiar chill of winter in order to buy a million presents, it imposes the issue of getting all your family members into co-op PC games.

The holidays make the perfect time for indulging in a few videogames that will help you get through those cold, lazy days. Luckily, plenty of games have wintery-themed updates just for the holiday season, but let’s not disregard all the games that have Christmas levels all year round.

Make yourself a warm bevvie, light a fire, and get comfy as we run you through some of the best Christmas-themed levels that PC gaming has to offer – some from PC games present, and others from PC games past. As for the future – that will have to wait for next Christmas. 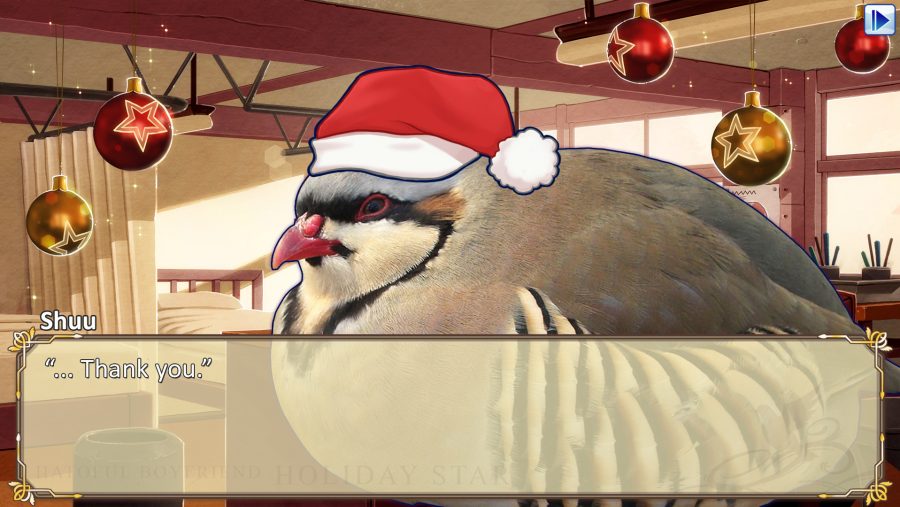 Because nobirdy should feel lonely during the festive season, everyone’s favourite pigeon dating simulator is here to spice up your holidays with its Christmas-themed four-episode DLC.

Playing as the only human in a world of talking birds, you are tasked with working alongside the returning cast of colourful avian characters to solve various mysteries around the city – from uncovering who is stealing everybirdie’s Christmas trees, to an absurd plot revolving around an unhinged king in a dreamland.

While not as heavy on the romance as its predecessor, Holiday Star brings enough of the series’ nonsensical charm to the table that it will make you wonder if you have had a little too much eggnog. 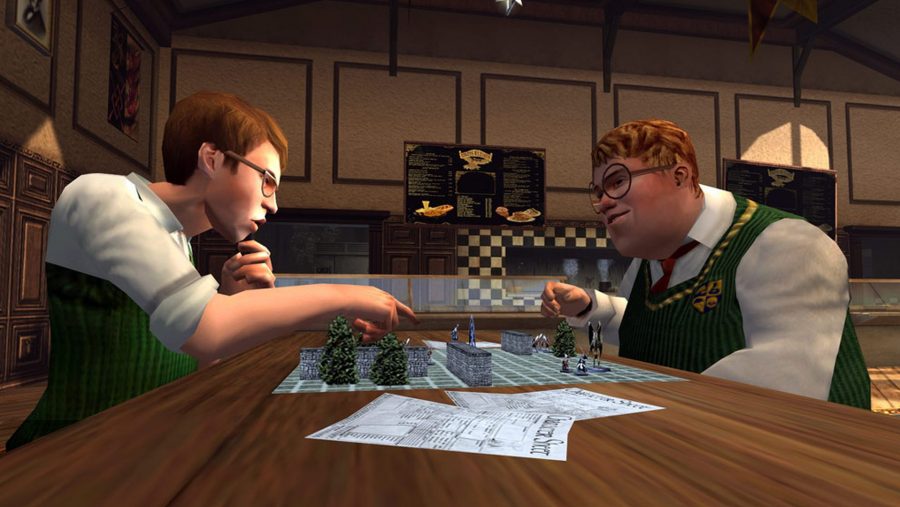 Bully’s wintry third chapter is nothing short of a Christmas miracle for anyone with a penchant for misbehaviour and delinquency. Donning his best Rudolph sweater, protagonist Jimmy decides to bring his own kind of Christmas traditions to Bullworth, which mostly involves pelting a lot of people in the face with snowballs and getting chased by angry elves (most of which have been hit by said snowballs).

Never to miss a beat, Rockstar’s finely crafted festive missions are a real treat, each laced with their trademark humour, ranging from helping an alcoholic Santa decorate his grotto with trash to taking part in what looks like an acid-fuelled Christmas pageant whilst dressed as a creepy Nutcracker. This is what the holidays are really about, folks. 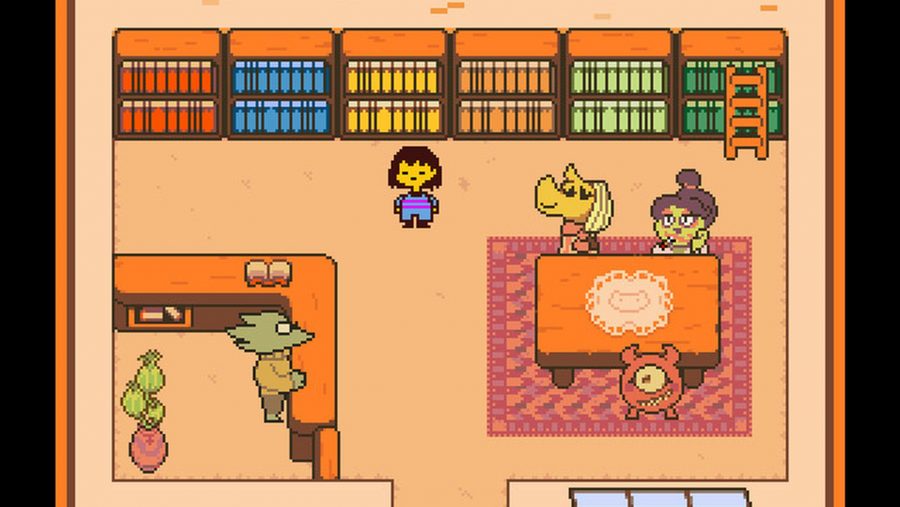 If Bully is the Gremlins of Christmas-themed videogames, then Undertale is arguably its Home Alone counterpart: a whimsical story of a child left by themselves to fend against monsters who have no understanding of personal boundaries.

Snowdin is an overwhelmingly charming and perpetually festive town in Undertale. It is adorned with fairy lights, presents, and a giant Christmas tree centrepiece, natch. It is also home to fan-favourite skeleton brothers Sans and Paryrus – two siblings who enjoy nothing than cracking jokes and cooking spaghetti, who take a liking to protagonist Frisk upon the first meeting. The rest of the town’s eccentric population, along with its nostalgia-inducing music and puzzles are more than enough to make you positively sick with Christmas cheer. 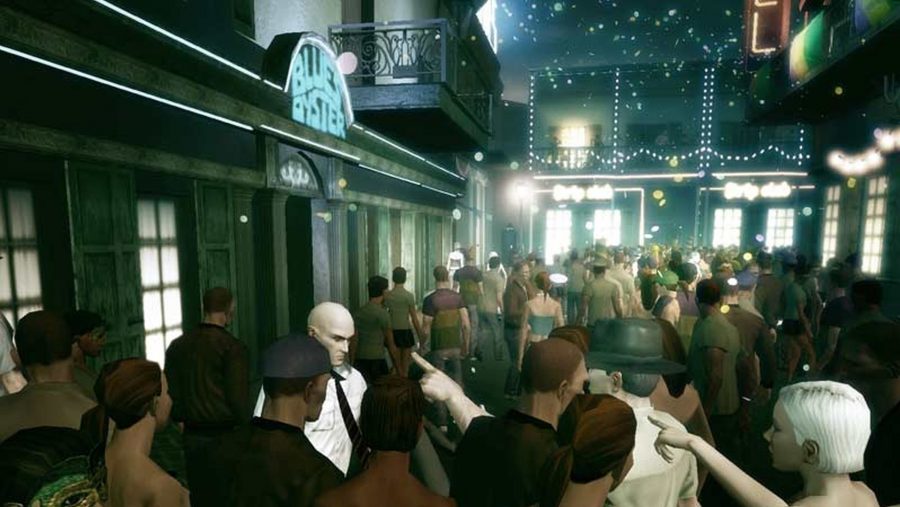 No Christmas is ever complete without a little bit of karma. In Hitman: Blood Money, Agent 47 has quite the lengthy naughty list, with one particular mission tasking you with infiltrating an opulent mountain lodge to assassinate a pornography tycoon and a senator’s son, who you can probably tell from that description alone are not the nicest folk in town.

The location itself is littered with bizarre characters, including a crew of belligerent Santas that you are free to knock senseless and use their costumes as a disguise or, if you are completely absent of Christmas spirit, kill without remorse. Either way, there is something oddly satisfying about donning old Saint Nick’s famous attire and murdering with expert precision. Nobody suspects Santa Claus… 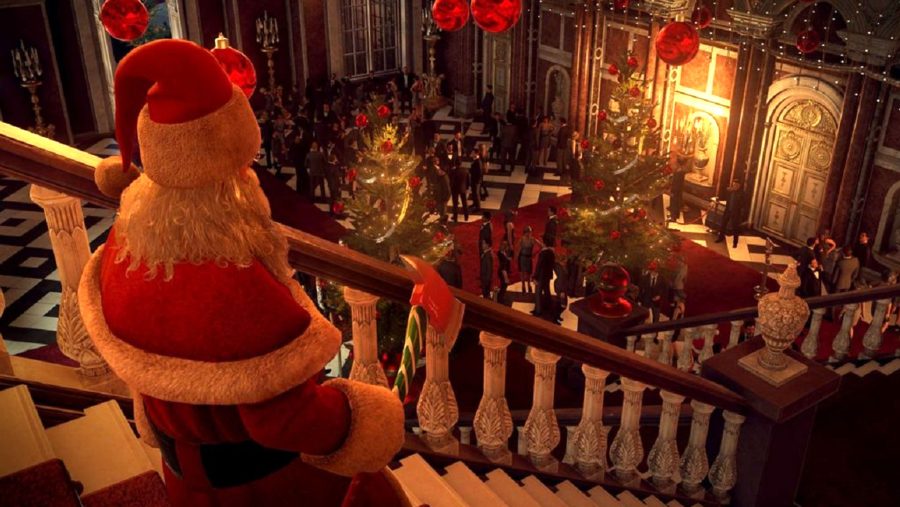 Agent 47 looks particularly good in a Santa suit, but you probably won’t want whatever he’s bringing you. You will want to play Hitman 2’s limited-time Christmas event, however. It’s a repeat of last year’s event, this time called Holiday Hoarders, and takes place on the updated Paris map – reflective mirrors and all. Like all the best presents, it’s free, too. 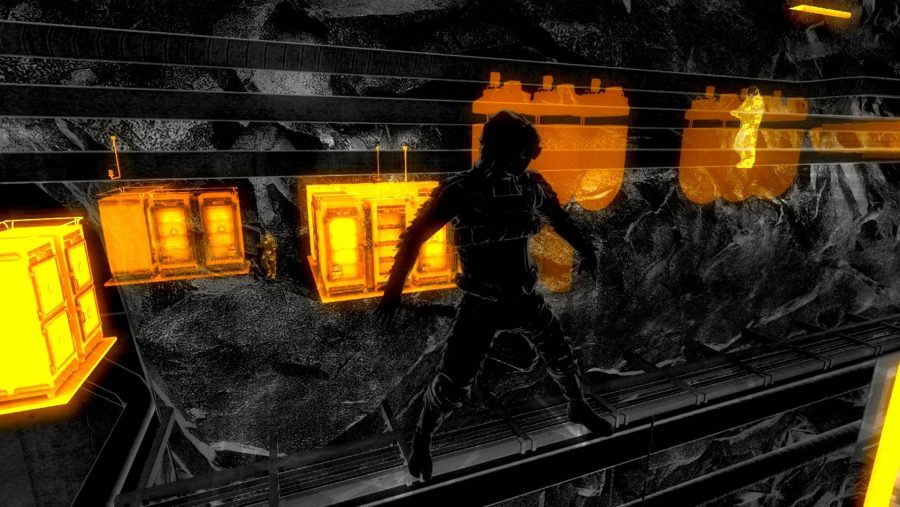 Christmas is not just about spending time with loved ones and the gift of giving. It is also about participating in the nightmare that is unabashed capitalism in all its gift-wrapped glory.

American Consumption sees Sam Fisher infiltrate a shopping mall plastered with the tackiest Christmas decorations you will probably ever see. His intention is to prevent terrorist organisation The Engineers from using the mall to poison Chicago’s water supply.

You need to use every tree, decoration, and festival stall available in order to successfully sneak your way through through the complex, doing so while Tom Paxton’s song “We’re Going To Get The Christmas Tree” plays in the background. Yes, it is nearly as unbearable as Christmas shopping in a mall in real life. 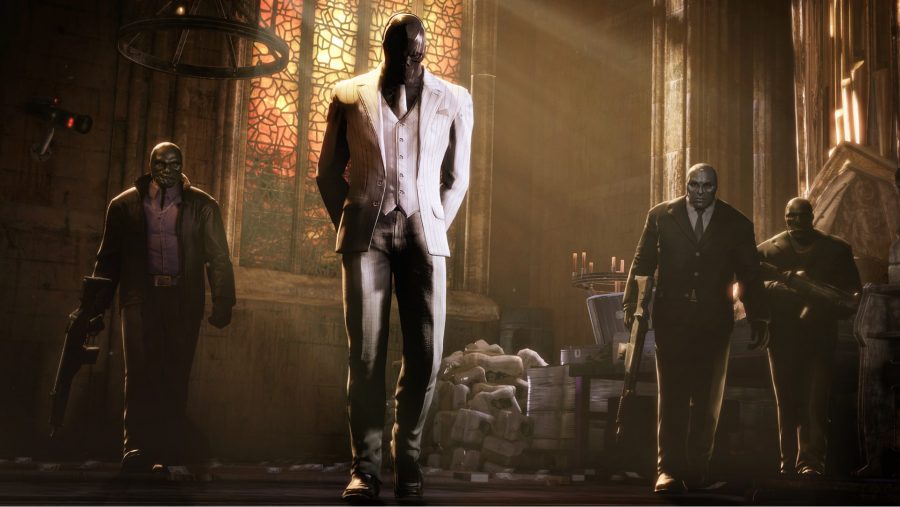 Never one to have a good time at any point in the year, Batman’s holidays gets off to an aptly downcast start. Putting a considerable bounty on the caped crusader’s head, crime lord Black Mask attracts a motley crew of Batman’s villains to Gotham, including Bane and Deadshot, who all fancy a chance at getting a hefty Christmas bonus.

Read more: The best Christmas games to play on PC

While not the best received Arkham game in the series, there is something special about seeing Gotham covered in a layer of snow and decorations in Arkham Origins, with the chill of winter being the perfect backdrop to a younger Batman’s battle against the odds. It is also a lovely nod to ‘80s flick Batman Returns, which also sees Gotham set to a Christmas backdrop. In one particularly heart-wrenching moment, Alfred wishes Bruce (aka Batman, spoiler alert) a ‘Merry Christmas’ over their comms, reminding you who you really should be spending the holidays with rather than beating goons to a pulp in the streets. 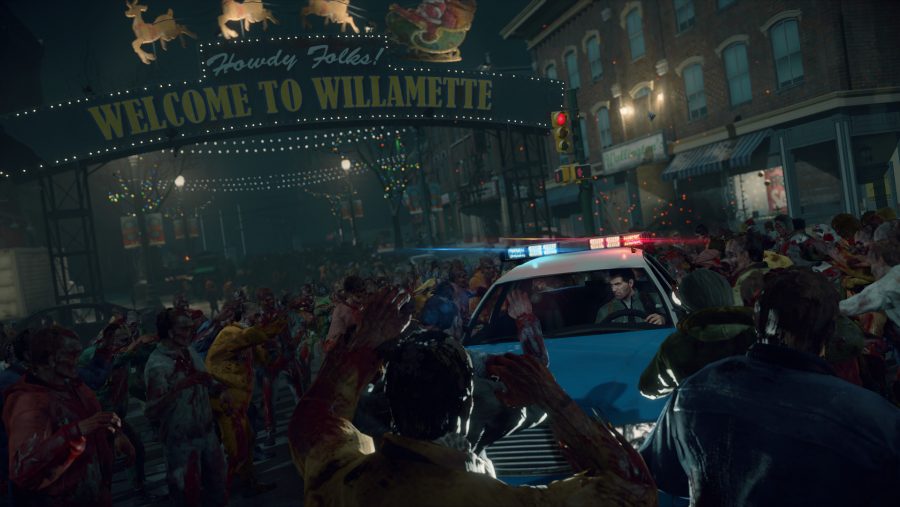 Nothing lets the sheer madness and creativity of Dead Rising shine brighter than Willamette at Christmas. It is a playground for protagonist Frank West to unleash havoc among the undead that roam the place. Returning for the first time since the series’ original iteration in 2006, Frank brings his unique brand of photojournalism to investigate why an outbreak has occurred once again, this time on Black Friday.

Willamette’s oddly jolly atmosphere – complete with Christmas jingles and gaudy neon decorations – is the perfect setting for you to let off some steam against the legions of zombies. It hardly matters whether your weapon of choice is a baseball bat adorned with fairy lights, a gun that launches festive ornaments, or a wand that turns murderous hordes into yet more malevolent gingerbread men, Willamette caters to a merry, bloody Christmas. Goodwill to all men! Except the dead. 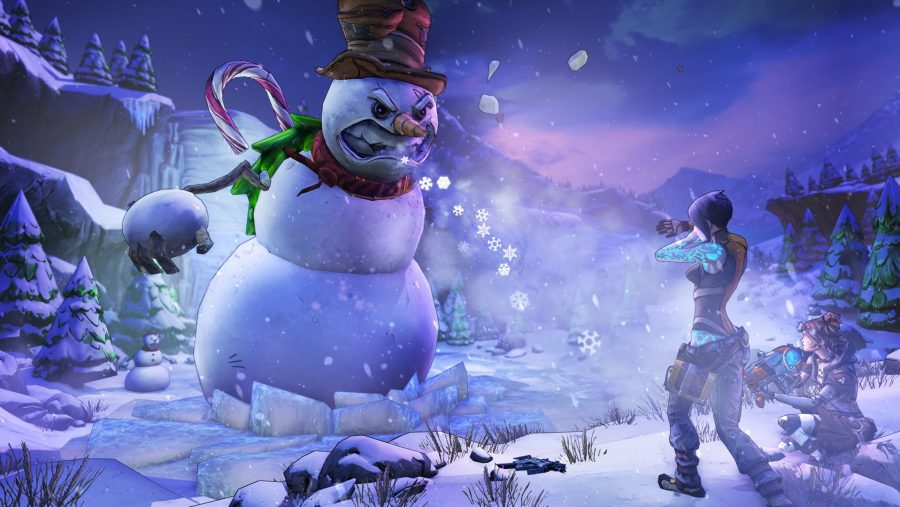 There seems to be a piece of Borderlands DLC for every occasion under the sun, and Christmas is no exception. Gearbox’s short and sweet tribute to the holiday season sees you visiting the town of Frost Bottom through a magical wardrobe in Marcus’s workshop (a lovely nod to C. S. Lewis’s Narnia series) to investigate a gun shipment gone AWOL.

Ho ho ho: The best games to play at Christmas

Following a series of instructions from the Grinch-like Marcus, you face opposition from all manner of festive baddies – from hostile snowmen to packs of abdominal yetis – as you prevent Mercenary Day from being ruined. The level culminates in you facing off against Tinder Snowman, who I assume is unrelated to the dating app, with your Christmas present being the gift of his head (which you can wear) upon besting the creature. 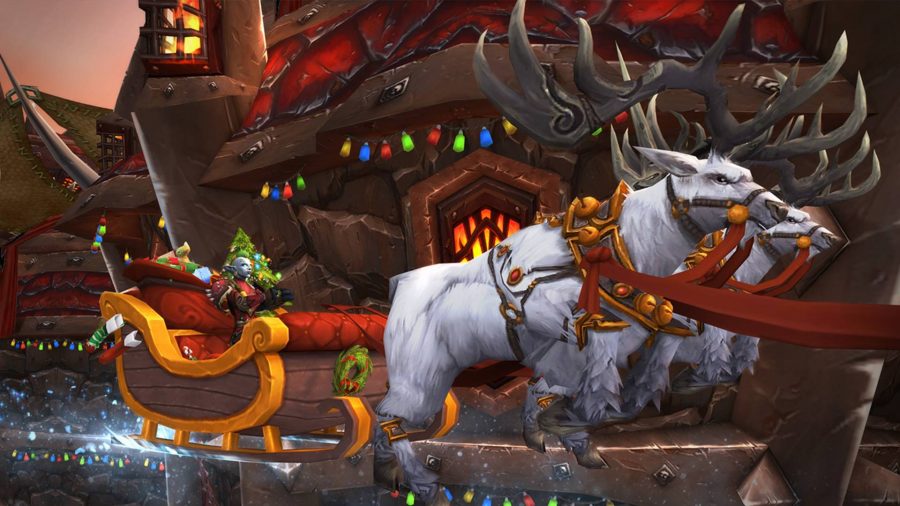 The Feast of Winter Veil or, the Feast of Great-Winter, is World of Warcraft’s take on the holiday season. For several weeks players can fling snowballs, perform quests to obtain gaudy Christmas sweaters or festive mounts, and defeat the Abominable Greench to halt its attempts to steal Christmas in a very Grinch-like manner.

Santa, oh, I mean Greatfather Winter, won’t be giving out gifts for free to good girls and boys, in World of Warcraft you need to purchase the seasonal goodies from him and collect milk and cookies for the jolly old fellow in exchange for gifts. But it’s all worth it for the delicious ale and candy canes. 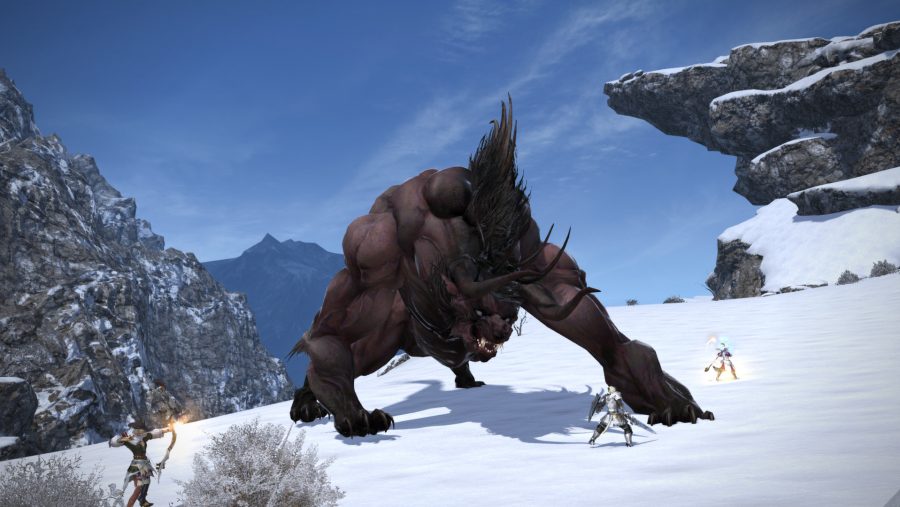 Most MMOs feature a seasonal event of some kind, sure, but it is Final Fantasy XIV that knows how to celebrate with the most style. Taking a more wholesome approach to the holidays, the Starlight Celebration is about spreading the season of goodwill, turning Eorzea into a winter wonderland, complete with tooth-achingly sweet decor and a plethora of missions that reward you with holiday-themed items. Take that, Christmas.