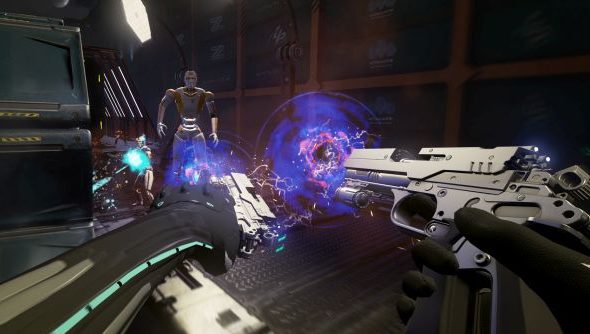 The world of headsets and motion controls just had its first breakout hit. Raw Data is a first person shooter, sword-fighter and Jedi-power user that launched on Steam yesterday. It’s in early access after a few months of doing the trade show circuit, and is mostly about destroying robots with a variety of tools. It took the top spot on Steam’s best sellers list last night – the first VR game to do so – and is still in second place at time of writing.

If you prefer your great first-person-shooters mouse based, we can help with that too.

Here’s roughly how it plays:

The first Early Access version has a couple of selectable characters, one focused on guns while the other uses a sword, four missions plus various enemy types and abilities to destroy and use. There’s also a full tutorial so you spend as little time as possible muddling around and as much prancing around your VR room fake-blowing-up robots with lasers as you can.

They’ve got a plan too, with a full roadmap of release schedules for different features, worked out by version number up to 0.8. They want to launch these every two weeks, but it’s worth pointing out that very, very few Early Access game schedules have survived first contact with the players. They say as much in their own plans:

“We’re aiming to have the full version of Raw Data ready by late 2016,” reads the Steam description. “However, the Early Access period will last as long as it needs to gather valuable community feedback, implement it into the game and nuke every reported bug or glitch to ensure the final game is solid and complete.”